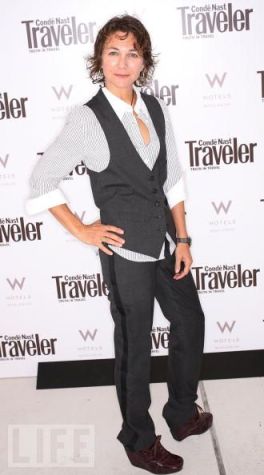 Remember back in November when we told you that Mama Chaiken was all set to produce that medical pilot, Rhodes to Recovery, with the Two and a Half Men producers? Well, guess what!? Per ushe, she saw something shiny, dropped that plan and is now supposed to executive produce the CBS drama pilot, Hail Mary, with the show’s creator, Jeff Wadlow and Joel Silver.

Her new toy, Hail Mary, “is a buddy P.I. show set in Atlanta that focuses on a suburban single mom who teams up with a streetwise hustler to solve crimes.”

Rhodes to Recovery is just the latest in a growing list of aborted post-L Word Chaiken projects.  Like, whatever happened to Chaiken’s CW drama, Confessions of a Back Up Dancer? Or the other CBS show she was supposed to develop based on The Physick Book of Deliverance Dane about “a young woman who realizes she descends from a long line of witches dating back to 1692 Salem?” The number of questions I have for Ilene grows by the day.

Meanwhile, back at the ranch, The Real L Word is filming season 2, focusing on Whitney and her friends and everyone is sworn to secrecy about who exactly those friends are. No word on the chicken’s involvement so far, but I’m sure she’ll pop in just in time for those weirdass episode intros to ask Whitney, “How long do you last during sex?” and “What does a lesbian taste like?”