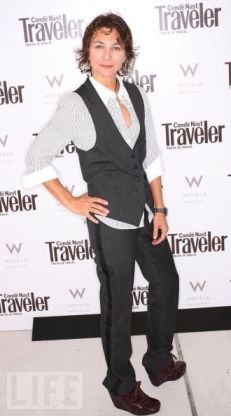 In an exciting twist, Ilene Chaiken created a brand new show NOT titled The L Word or The Real L Word.  For now it doesn’t appear the new show will elicit a collective lesbian battle cry, but it’s early yet.

Rhodes to Recovery will be produced for CBS (parent company of Showtime, fyi) and “centers on an openly gay female trauma surgeon and her new colleague, a straight male neurosurgeon. Their lives at work — and at home — become complicated when one starts dating the other’s ex-wife.” Chaiken’s co-executive producers are Eric Tannenbaum and Kim Tannenbaum, the minds behind Two and a Half Men. And ya’ll know how much Riese loves Two and a Half Men!

Hey- whatever happened to Chaiken’s CW drama, Confessions of a Back Up Dancer? Or the other CBS show she was supposed to develop based on The Physick Book of Deliverance Dane about “a young woman who realizes she descends from a long line of witches dating back to 1692 Salem?” Ilene Chaiken is sort of like that cousin you see every year who always has a new “investment” on the horizon or “business” plan.

JB’s new show, The Chicago Code (formerly titled Ride Along) will debut the night after the Superbowl, February 7 on FOX. Look how butch and Bette Porter-like she is in that uniform! So listen. Ilene Chaiken spoke personally to a girl I know about this show and revealed that JB is pushing the producers to make her character gay. Take that for what it’s worth. JB also covers the December issue of More Magazine.

As we wait patiently for the new Uh Huh Her CD to be released in February (maybe?), Leisha Hailey pays the bills by guesting on CSI.

Sarah Shahi will be back in our lives on the regular starting January 20, 2011 on USA in Fairly Legal (formerly titled Facing Kate). Sarah plays Kate Reed, a top litigator that was frustrated with the system and decides to become the opposite of a lawyer – a mediator. After her father suddenly dies, Kate finds herself at odds with her step mother who is also now her new boss. 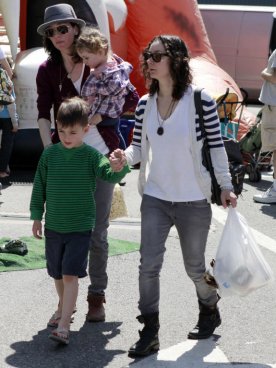 I’ve sat through nearly every episode of The Talk listening to Leah Remini, Sharon Osbourne, Holly Robinson Peete and Julie Chen prattle on about their perf hetero lives with their darling husbands and 2.5 children whereas our very own Darlene Conner aka Sara Gilbert often comes off as a single mom, without mention of her partner, Ali Adler. Why do I put myself through this exercise? I’m waiting for Sara to say something – anything! – about her life on the show SHE created centered around motherhood. She has a golden opportunity to chat about her life as a mom of two boys in a gay family, instead, she mostly relegates herself as foil for Leah Remini to poke fun at her vegan lifestyle. Whatever.

Anyway, the good news is that the show’s first male guest was Neil Patrick Harris who obviously is only there because he and his partner, David Burtka, are tight friends with Sara and Ali.  Neil chatted about life as a new father of twins and even got Sara to loosen up and mention Ali by name.

Backstory:  Graeme Taylor is the openly gay 14-year-old who spoke at a school board meeting in defense of his teacher, Jay McDowell, who was disciplined after he kicked two students out of his class for anti-gay bullying. When he was unsuccessful, Towleroad and consequentially Buzzfeed picked up the story and now he’s on Ellen!