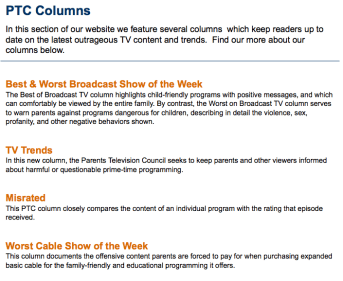 I’m obsessed with the Parent’s Television Council television recaps and so I’ve created a Match Game for you. But first, I want to talk a little bit about The Parents Television Council television recaps. You know how we only recap the lesbian parts of our favorite shows, like Pretty Little Liars and Skins Season 3? Well, the PTC does something similar with their recaps — they only recap the sex, drugs and profanity, and they do so with the same meticulous fascination we take to homosexual content.

For example, from last week’s episode recap of Skins on MTV:

The episode opens with the camera lovingly focusing on Chris’ massive store of erectile medication. Then the viewer is treated to multiple scenes of Chris’ erection tenting out his shorts; Chris staggering to the bathroom and urinating on his own face due to his erection; and finally, Chris relieving himself against a shower curtain.

To be perfectly honest I don’t think that the PTC’s concerns are always off-base — they have some compelling points to make about violence against women, for example, and they are careful to avoid homophobia. There are some recaps that I even actually agree with in parts, like this one of Sex Rehab With Dr Drew.

But I do find their opinions on drugs and sex to be counterproductive, ignorant of how life really is, and excessively puritanical. I do not find Janet Jackson’s nipple or Adam Lambert’s Big Gay Kiss remotely offensive or damaging to children but I am offended that The Parents Television Council is offended by Janet Jackson’s nipple and Adam Lambert’s kiss. You know?

In any event — what I dislike most about The Parents Television Council is their conviction that it’s the responsibility of the networks and the advertisers to monitor and censor content for children. It’s not. That’s your parents’ responsibility, period. Furthermore, the PTC should give kids and teenagers a little more credit — they’re not blind sheep dumbly patterning behavior after teevee shows, they’re whole entire human beings with original thoughts & moral compasses. Etc!

Anyhow — SO! Are you ready to play a game? 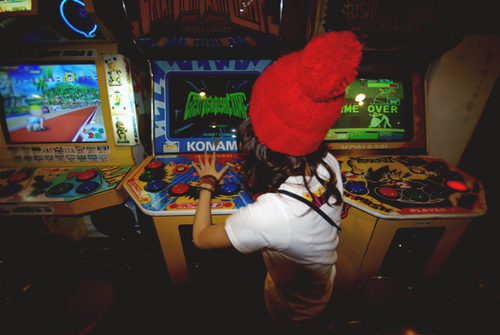 Here’s how it works. First, I’m giving you this list of just some of she shows The Parents Television Council has recapped as one of the Worst Shows of the Week:

Now below I’ve pulled descriptions of some of those shows listed above from the Parents Television Council recaps. Your job is to match the description with the show!

Share what answers you DO have in the comments, if you want, and the first person to get them all right or the person who has gotten the most right wins an Autostraddle 2011 Calendar and a vintage Autostraddle sticker.

Descriptions of Teevee Shows By the Parents Television Council:

1. “[This show is filled with] repulsive hookups, drunken binges, and profanity-laced grunts posing as speech. This program is an evolutionist’s dream; if ever there was proof that Man is descended from apes, the cretins on [this show] provide it.”

2. “…the scatological show has emerged as cable television’s top compendium of social perversity… seemingly rips storylines from a dictionary of deviance.”

3. “Like a recurrent bout of dysentery, [this show] is the gift that keeps on giving. The [most recent episode] of the sex-slathered drug-addict drama continued its efforts to portray teenage life as crushingly depressing, obsessed with meaningless, emotion- and consequence-free sex, and manageable only through the ingestion of massive quantities of controlled substances.”

4. “A steady stream of bleeped expletives and one unbleeped f-bomb from some of the lewdest, crudest, most conniving women on television.”

6. “It is nearly impossible to watch an episode of [this show] without feeling sickened… a TV program that exploits child molestation for the purpose of “entertainment.”

7. “Given the increasing amount of graphic sexual situations on television, perhaps in 30 years, it will be perfectly normal for parents to regale their children with sordid tales of their sexual conquests.  But for now, the premise behind [this show] is grossly inappropriate.”

8. “Jobless twenty-somethings being housed in a palatial home in an exotic setting for free, then turned loose on a month-long spree of drunken carousing, casual sex, and overly dramatic and immature personality conflicts, while being followed by camera crews every second.”

10. “One short week after showing a character eating out of a baby’s full diaper, eating vomit, and licking the baby’s rear, viewers got an episode with an outrageously stereotyped gay father having a sex-change operation, graphic violence and sexual innuendo, and yet more vomiting.”

12. “…behind whatever thinly-veiled social commentary… just an excuse to make fart jokes … no matter where they come from… when did the word “comedy” become synonymous with “heartless” and “disgusting”?”

13. “When future generations look back and wonder when America’s cultural decline began, they may consider a variety of possible starting points; but there will be no argument that, at least in terms of entertainment, the metaphorical apocalypse was well underway by 2010… as proof consider exhibit #1 [this show]… a particularly disgusting mélange of violence and gore.”