We arrived in LA only a few hours before we had to head off to Mass. I was nervous and worried and running on little sleep, so I gave in and decided that I would just go to church as a guy. Luckily, my mom noticed how sad that idea was making me, so she suggested I go and get changed and dress however makes me most comfortable, not what I think the people at the church want me to dress like. I opened my suitcase, put on one of my dresses, took a deep breath and headed to Mass. When I first got there, I nervously sat down and tried to keep to myself. I only looked up when I was being introduced to family friends or greeting my extended family. Before Mass started, one of my cousins came up to me and said, “I like your dress, you look very beautiful.” As soon as she told me that and I realized that everyone was being nice to me, I calmed down and smiled through the rest of Mass. 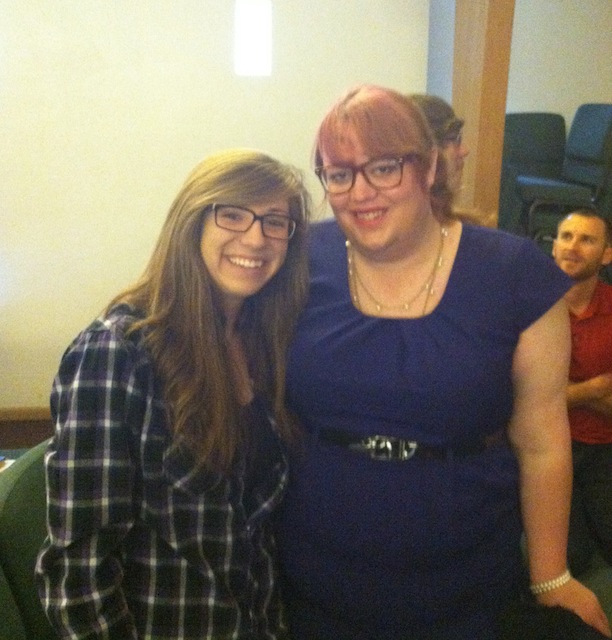 At church with a friend

When I came back to Idaho, I knew that I was done with my old church. If my membership there was going to depend on whether or not I was willing to go sit in weeks and weeks of meetings with the pastor and elders, my membership wasn’t real. Their willingness to accept me as long as I didn’t shake the boat too much was in direct opposition to God’s unconditional love. So I asked around and found out that there was a local church where a lot of the queer Christians that I know go. My friends and I decided to check it out at the beginning of the summer and right away we could tell that they were super welcoming to the LGBTQ crowd. In the announcements they asked who wanted to march with the local queer group in the upcoming parade, they have a queer woman presiding over the service and a gay man leading worship. I felt way more comfortable here than I had felt at church in years.

The only problem is that they might put a little too much effort into welcoming the queer community. The first Sunday I went there, the first three conversations I had during coffee hour after church were about a parishioner’s gay relative who lived in San Francisco, Prop 8 coming before the Supreme Court and gay marriage in California. All of these conversations were started by other people without any prompting from me. It could just be that they were a small church and weren’t used to having a group of newcomers show up on a random Sunday, but it was still a little strange. Even though the coffee hour conversation was a little repetitive, I still had a good time. My relationship with the church was starting to turn around.

That relationship hit a huge hurdle later in the summer when one of my good friend’s wedding was coming up. Before she moved to another town for a teaching job, she and I had been very close. She was one of my best friends at the Baptist church and I even looked up to her as a Christian role model. We worked together in the youth group, we were in the same small friend group and we would hang out on a regular basis. When I came out she offered her love and support via Facebook. A few weeks later when she was back in town visiting, she saw me at church, gave me a big hug and told me I looked beautiful. I was really looking forward to her wedding. But then, just a few weeks before the date, I got a Facebook message from her.

She said that she wanted her wedding to “honor God” and that she and her fiancé didn’t think that I was doing that. She misgendered me and used my birth name throughout the message and told me that she didn’t “condone” me coming to her wedding as Mey. This, according to her, was not showing partiality, and she was expecting all of her guests to honor God under the same set of rules. However, those with less visible “sins,” such as divorce or premarital sex or atheism were still invited. She did, however, invite me to come if I were willing to dress and act like a man and pretend like I had never come out as the real me — as a woman. She said that as long as I was not following God, I was not welcome, and I guess the only way she could tell that I wasn’t following God was if I were to show up in a dress and lipstick. And that’s where the problem lies. Unlike so many other things that many Christians consider to be against God, being transgender is, for many of us, a very visible thing. When I went to church for the first time after coming out, everyone could see the change and was constantly reminded that I was now a sinner in their eyes. 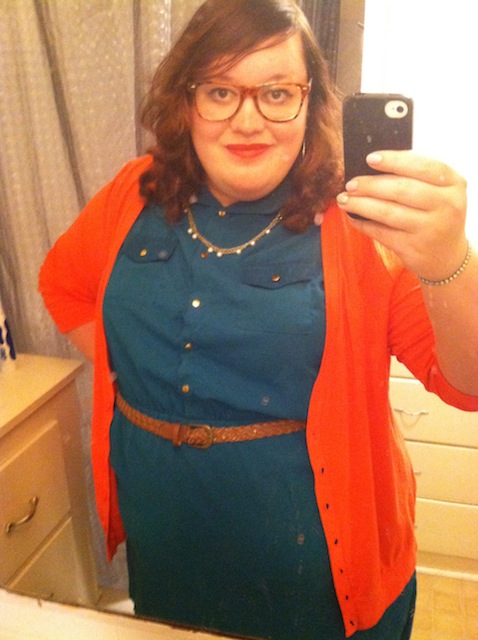 Going to a Catholic wedding

In addition to being judged for being a “sinner,” I’ve had a lot of people assume that when I was coming out, I was also renouncing my faith. I’ve had to explain over and over again that there are plenty of transgender and other queer Christians. I’ve had to tell people that no, me being trans doesn’t mean that I think God made a mistake. I don’t even want to think about all the people who have told me that they still love me, they just don’t support my decisions and that they know that this isn’t what God wants for my life. I’ve never understood this clearly what people mean when they say “love the sinner and hate the sin.” And it isn’t a good thing. They spend an awful lot of time focusing on the sin that they hate so much and not enough time focusing on the “sinner” that they’re supposed to be loving. I have no time for churchgoers who are going to judge me or tell me that I’m being a bad Christian for being who I am. I was taught that I am Wonderfully and Fearfully Made, and that means that my transgender body is wonderful and is exactly what God had in mind when They made me. In fact, that thought is one of the things that keeps me going in hard times. God created me to be transgender and queer, and so I have to remember, as the Bible says, if God is for me, who can be against me?

Joan of Arc was burned at the stake for crimes that included dressing like a man, but it’s for those same actions that she was canonized by the Catholic Church almost 500 years later. Now, I’m far from being a saint, but I like to think that if she can be celebrated and honored by the church for challenging gender norms than so can I. Or at least I can find a place that will fully welcome me for being who I am.

I currently still have a very complicated relationship with the church. I absolutely don’t want to belong to an organization that condemns people like me or even has second thoughts about me being a full member because of my gender or sexuality. I’m not sure when I’m going to find another church that I’ll feel as at home as I did at my last church, or if I ever will. I still very much believe in and have a relationship with a God who doesn’t judge and instead welcomes everyone into Their loving arms. In fact, it’s my relationship with God that has given me the hope and strength I’ve needed to make it through some of my darkest moments of depression and dysphoria.