On June 5th and 6th, DARPA (Defense Advanced Research Projects Agency) Robotics Challenge is underway. And it is live on the internet. And it is pretty awesome to watch.

The idea for this particular DARPA competition began the day after the Fukushima disaster in March of 2011 — having a robot that could have turned a valve would have made that day go much differently. Disaster response workers wouldn’t have had to put themselves in danger. The situation would have been better contained. The tasks that these robots have to complete are based on both natural and man-made disasters, but it’s safe to say that they take direct inspiration from Fukushima. The course is as follows: 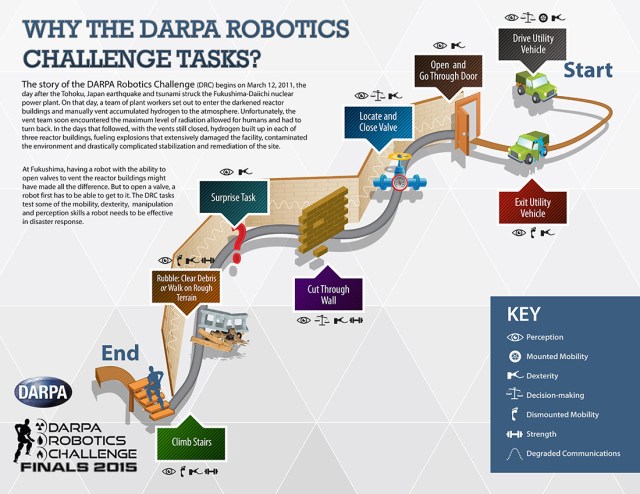 According to Start Your Humanoids on Popular Science, the human-centric nature of the tasks at hand have lent itself to an interesting design unity: almost all the entrants are humanoid (though not all — some are based on animals, like NASA’s RoboSimian). Y’all, it is eerie and remarkable to watch the humanoids.

As I’m typing this, I’m watching the Running Man robot get out of a Polaris vehicle. It is uncanny — the tiny muscle movements we take for granted as humans are so complicated when they’re automated. They look both awkward and fluid, and seeing myself reflected in robot is weird, frightening and hopeful all at once. The robot opened a door, crossed a threshold and autonomously turned a valve (the competition involves degrading communications from the robotics team to the robot to mimic real disasters). When the robot fell on the debris, it fell like a person and ignited a crazy empathy in me, disproportionate to the non-pain a robot would feel in such a fall. What an amazing new world we live in, where people build such things. My grandfather was a milkman who delivered dairy with a horse and buggy. Humans are spectacular, sometimes.

It’s still early and it’s anyone’s game to win the $3 million, especially since Google pulled one of the teams they acquired out of the competition, As stated in the same Popular Science article:

According to a current DRC team member, who did not want to be identified, this decision was good news for the remaining teams, joking that SCHAFT’s bot would have completed the DRC finals tasks “while holding a cigarette in one hand.”

What’s truly amazing and hope-giving is that some of these teams include high school students. HIGH SCHOOL STUDENTS, PEOPLE. We so often hear adults whining about the inabilities and inefficiencies of younger generations, but our children are building robots. Our children are scientists. This bodes well, I think. 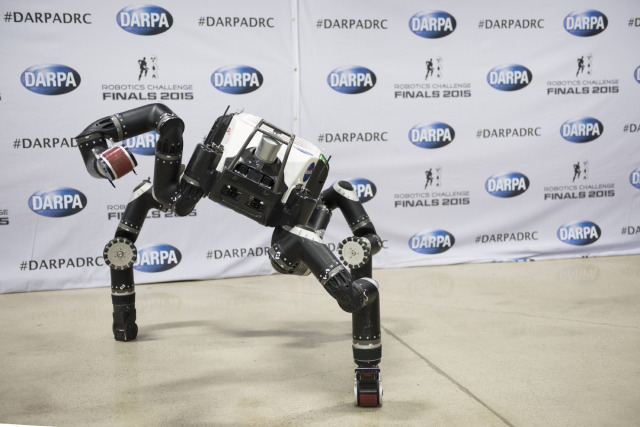 There are definitely downsides to such a competition — DARPA is a military organization, and while the robots are focused on disaster relief and rescue, winning technology funded by DARPA Robotics Competition prize money is always technology funded by the U.S. military. That means, like anything, it could be used to save human life or end it. When the military is involved, we all know which is at the very least a consideration.

Just as terrifying for me is the logo positioned strategically on Running Man’s leg — the camera zooms in on the legs when the robot traverses difficult terrain, like getting out of the car. Sponsorships make me wonder how we can possibly expand the robotics field to include teams that don’t have support from massive corporations. Could such technology be developed without DARPA, even? There’s no denying that large amounts of money are required to cut the edge in science and tech — is there any restructuring possible to democratize such a field as robotics?

Frustratingly, DARPAs live streams are prone to cutting out and sometimes they go long stretches of time with visual only, no sound. This is both hilarious and a little worrisome—this organization is capable of finding robotics teams that make humanoids climb stairs by themselves, but they are incapable of live streaming their event.

And then of course there is the fear that this is where Cybermen begin, but I digress.

I strongly encourage you to watch the last day of finals online — finals that were years the making. You can see the live stream at CuriosityStream (likely you won’t hear large portions of it, though) between 11 am and 9:30 pm EST. You can also download the DRC app, available on iOS and Android. The app doesn’t have live stream video, but it does have an updating scoreboard and information.

If you can’t get enough of robots this June, NASA will also be holding a sample retrieval robots competition from June 8th-13th, also available to watch online.

So what did I miss? What are your feelings about robots? Are you watching the DRC right now? Do we have any queer roboticists in the house?

This has been the one-hundred-thirty-first installment of Queer Your Tech with Fun, Autostraddle’s nerdy tech column. Not everything we cover is queer per se, but we talk about customizing this awesome technology you’ve got. Having it our way, expressing our appy selves just like we do with our identities. Here we can talk about anything from app recommendations to choosing a wireless printer to websites you have to bookmark to any other fun shit we can do with technology. Header by Rory Midhani.