There’s something special happening in world of comics and animation, and it’s obvious in storylines and character design, from Lumberjanes and Heavy Vinyl to Netflix’s reboots of She-Ra and Carmen Sandiego. Queer people are in the room where it happens. A haircut, an outfit, the way a character holds herself: you can just tell the person who drew them is queer. Most recently, my gaydar pinged on the art from Work for a Million, the graphic novel adaptation of Eve Zaremba’s pulp series about dyke detective Helen Keremos. The jeans, the belt, the button-up; her sunglasses, her hair, the way she leans. The lesbian energy coming off her is unmistakable.

Which makes sense: Zaremba, who is now 88, published six novels about PI Helen Keremos starting in 1978, while she was also busy organizing and writing and fighting for gay and trans rights in Toronto. She helped organize the city’s first Pride parades and marched in protest against the bathhouse raids in the ’80s. Zaremba was also a founding member of the Broadside collective, which published a monthly feminist paper for a decade. Zaremba is a lesbian legacy, is what I am saying, and her most celebrated PI Helen Keremos novel, Work for a Million, is being adapted into a graphic novel by queer artist Selena Goulding and lesbian writer Amanda Deibert (along with help from Zaremba and her wife, Ottie Lockey).

A three-generation collective! Queerness upon queerness! 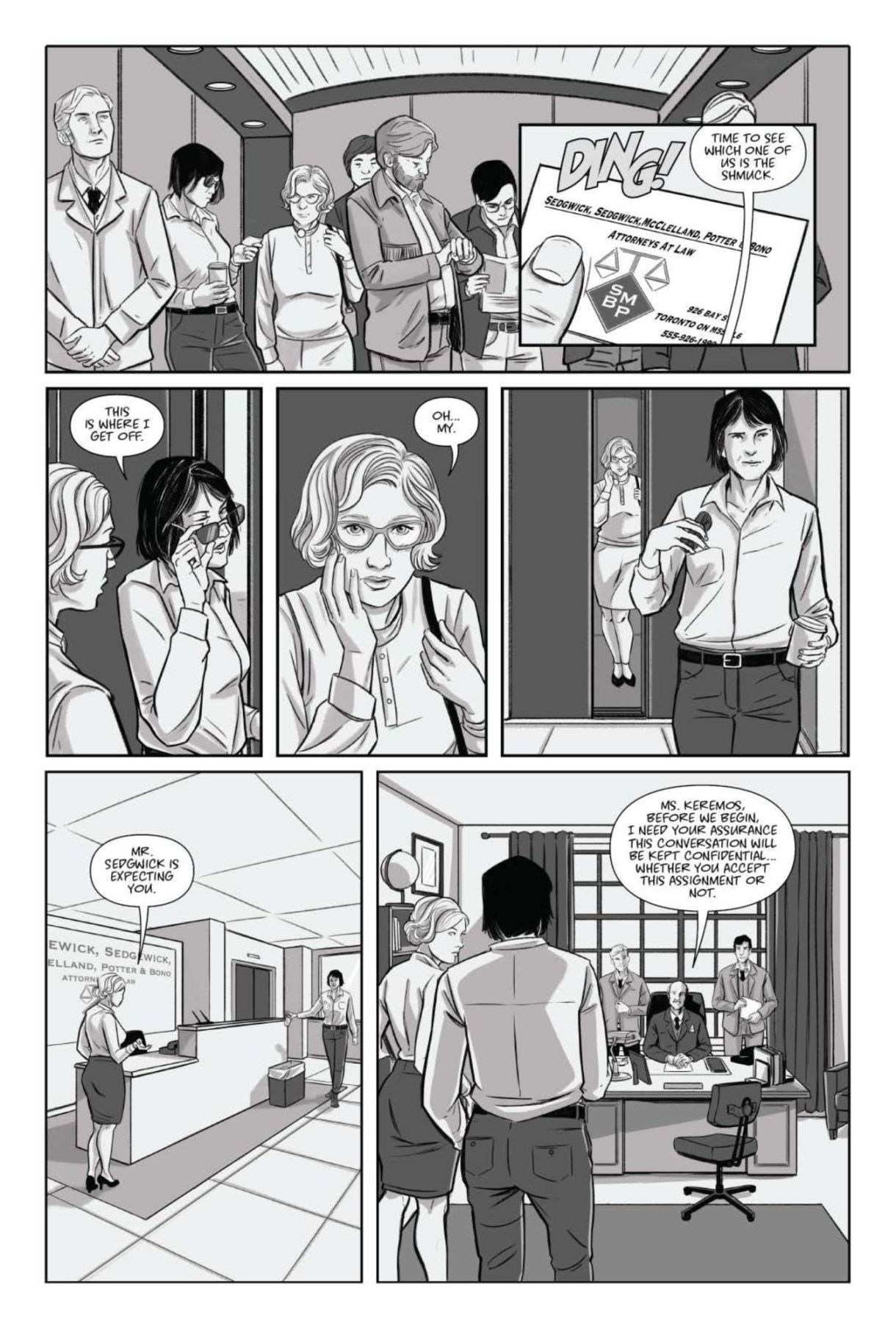 Work for a Million, which was originally published in 1984, follows pulp fiction’s first lesbian detective as she leaves her home in Vancouver to investigate threats against singer (and newly minted millionaire) Sonia Deerfield. As the two women grow closer, the mystery gets thicker and the danger more distinct. Helen’s got a Shane-esque swagger and a soft spot for redheads. Her chemistry with Sonia sizzles the second they share a frame!

PI Helen Keremos has always had a cult following, but her books have been out of print for decades. Zaremba and Lockey chatted with Quill & Quire about the decision to turn Work for a Million into a graphic novel and to release the print edition of the original book. “Our community was busy with politics and that’s what really mattered [in the ’70s and ’80s],” Lockey said. It was Margaret Atwood who convinced Zaremba to revive the character; she connected her with Bedside Press’ Hope Nicholson, who assembled the creative team and launched a Kickstarter to show publishers there’s a market for books like these. 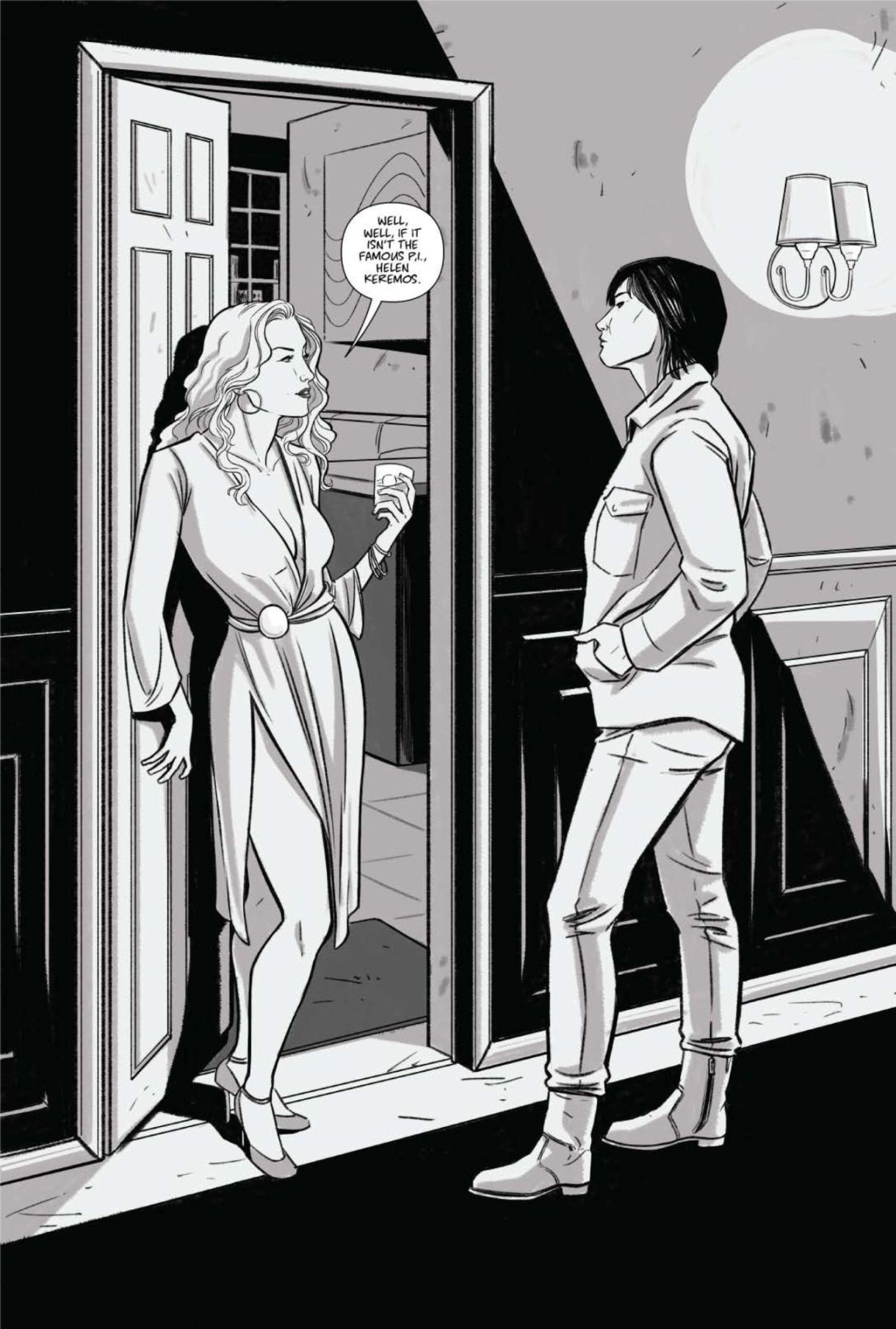 And of course there is. The first few pages of Work for a Million have a real Strangers in Paradise vibe to them. Terry Moore successfully published that series for 13 years, and even recently revived it. Plus, with the success of shows Jessica Jones and Killing Eve there’s never been a better moment for complex stories about complicated women. And with The L Word on the way back, you know that Shane archetype is never going away.

With a few days left in its Kickstarter, Work for a Million is only a few hundred dollars short of its $21,000 goal. You can pre-order a digital copy of the graphic novel for $10, or go all in for around $60 and get a hard copy of the graphic novel and the original book, plus pin-ups from artists like Selena Goulding, Barbara Guttman, Marguerite Sauvage, Elizabeth Beals, Sara Richard, Sami Kivelä, Bev Johnson, Vic Maholtra, Joana Neves, Caroline Dougherty, and more.

Donate to the Work for a Million  Kickstarter