After weeks of vicious bickering between Congress Democrats and Republicans about what’s worth spending the government’s money on, their latest stop-gap measure of a temporary budget expired at midnight last night. There was a real fear that if a long-term budget couldn’t be agreed upon, a “government shutdown” would have to occur – a suspension of federal government agencies that would have required the government to “furlough an estimated 800,000 government workers, close national parks, passport offices and other operations, and suspend an array of federal services” without the money to keep them running.

Republicans urged cutting funding to Planned Parenthood, largely because it provides abortions to some women, although (as many pointed out) abortions make up such a small part of Planned Parenthood’s work that in effect, the measure would mostly have cut access to contraception and treatment for STDs. Nor does any federal money directly fund abortion services SO IT’S TOTALLY IRRELEVANT.

Last night, Democrats and Republicans finally managed a compromise that didn’t please everyone, but that will enable the government to remain in business while they continue to bicker about the details of the agreement.

In the end, budget cuts totaled $39 billion, and many of the cuts Democrats had feared most did not come to pass. Some of the things that did not get cut include:

+ Planned Parenthood will remain funded in the compromise, although there will be a separate vote about it later in the Senate. (It is not expected to be defunded in that vote either.)

+ The Affordable Care Act. Obama’s health care law will remain funded, although there will also be a separate vote on it in the Senate – especially in light of the fact that judges earlier this year found part of it unconstitutional, there may well end up being changes to the law.

+ The EPA. The Environmental Protection Agency will remain funded to regulate the level of greenhouse gases.

+ The FCC. A provision from the Republicans that would have barred funding for the FCC to implement “net neutrality” rules was dropped.

At least one new provision was created – a school voucher system for low-income children of the District of Columbia. Just like any compromise, though, everyone had to give something up. Some things were bills that people had worked very hard for and that would have helped a lot of people, and they were cut anyways. Some of the things for which funding was banned:

+ Funding to transfer prisoners from the Guantanamo Bay detention center to the US mainland.

+ The Consumer Financial Protection Bureau, which was created last year and which Republicans have been widely critical of, will now have to undergo an annual audit on its use of funding.

+ Free Choice Vouchers. This was the bill sponsored by Senator Ron Wyden of Oregon, and it would have helped people for whom health insurance coverage costs between 8 and 9.8% of their annual income by letting them take their employer’s health insurance contribution to an insurance provider that costs less.

+ In the new compromise, Obama is prohibited from additional funding for the IRS, which could affect the agency’s ability to actually enforce the healthcare law. The compromise also calls for several new studies on the effectiveness of the health care law – its “impact on premiums, the waivers the administration has given to limited-benefit health plans, the comparative effectiveness research funds in the law and the 2009 stimulus package, and the cost of the contractors who have been hired to implement the law.” Republicans hope that they can eventually defeat it if it’s proven to be less effective than Democrats had hoped.

Although Democrats were able to protect many of the federal and cultural institutions that they value most, this was still a good day for Speaker of the House John Boehner. Although he’s been under heavy criticism from conservatives and especially the Tea Party for not pushing as hard as they wanted on budget cuts, although one could argue that the Tea Party’s expectations in this regard were less than reasonable. Now, however, Boehner seems to have won them and the conservatives of America back as a group, and is being hailed as the ‘winner’ of the budget fracas.

Fox News headlines on the subject include “Who Won The Shutdown Showdown? It Wasn’t Even Close” as well as “How He Did It: Three Keys To Boehner’s Budget Victory”. If you are interested in hearing a socially liberal interpretation of what “victory” for Boehner means for the rest of the country, try Melissa’s post at Shakesville: “Not only is the US government pursuing an austerity strategy, which is a terrible idea in every conceivable way, and will fail to stimulate growth while simultaneously creating a greater strain on underfunded social programs, but this “success” has come at the expense of women’s reproductive rights.” 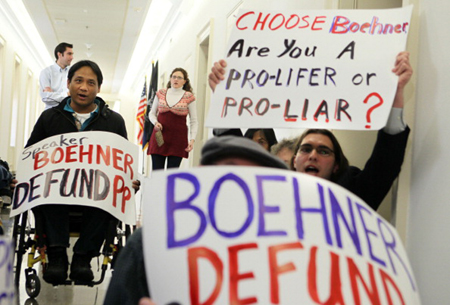 Boehner has already become the face of the Republicans of Congress and of the Republican House’s animosity towards the Senate and President, and it will be interesting to see how his ‘budget victory’ affects his standing and his goals for the new fiscal year. In the coverage of the compromise, he is set against Harry Reid, each of them described as champions of their respective parties, with Boehner’s priority being reduced government spending and Reid’s being access to healthcare, especially for women. (Reid claimed that the stall in closing the deal came from Boehner’s insistence on attacking the Title X program, which provides family planning services for low-income women, while Boehner claimed the issue was ‘spending levels.’)

The bill isn’t in effect yet; ironically, the government is still actually using one more ’emergency stop-gap measure’ to keep things going while they work out the details of the new agreement. Not everyone supports or endorses the compromise; a few Republicans have said they will vote against it “lacks many of the important bipartisan policy provisions my colleagues and I supported: stopping Obamacare, rolling back the job-killing EPA and defunding Planned Parenthood,” as Rep. Tim Huelskamp of Kansas says. Nancy Pelosi has stopped short of endorsing the bill also, saying only that “House Democrats look forward to reviewing the components of the final funding measure.” Although there will be more voting in Congress on the subject of how to spend the government’s money, it seems unlikely that these provisions will change significantly.

The financial compromise is welcome, and it’s comforting not only that the government will have the money to keep running, but that the people who are in charge were able to on some level put the continued function of our nation’s leadership above their personal priorities. The conflicting stories already being told the next day about the process of compromise, however, tell a different and more unsettling story. When one side uses the language of “coming together” and the other is still using the language of “showdowns” and “victory,” it raises more questions than answers on what the continued functioning of the government is going to look like.