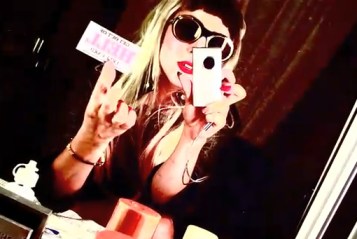 Two years ago, Lady Gaga released a series of video diaries shot in black and white/Truth or Dare documentary style fashion known as Gagavision. Well, guess what has returned just in time to expose her run-in with a Christian fundamentalist picketer outside her show Anaheim, California last week!

Basically, this is what happened. She noticed a man holding a sign declaring “Trust in Christ or End in Hell” as he handed out “Get Out of Hell Free” cards to passersby. She rolled down her car windows directly in front of him and the confrontation that followed went something like this (starts at 2:20 mark):

“Don’t you think it’s hurtful,” Gaga started to say, but was interrupted by the man who added, “It’s in a black book, with gold edges, a little ribbon.” When Gaga tried to defend herself by saying that she attended a Catholic school for 13 years, the man only further insulted her by adding, “That’s probably most of your problem that you got raised in a screwy religion.”

Gaga sums up the whole interaction with a simple “there’s 3,000 people standing in my line and nobody’s standing in your line.”

Meanwhile, Gaga has re-recorded “Born This Way,” adding new layers of swirling guitars, mandolin and harmonica accompaniment and christened it the “Country Road Edition,” which I’ve decided is better than the thumpa thumpa “Express Yourself” remake. The country remix also switches up the lyrics that play up the track’s laid back, Southern vibe: