Nine million people in the U.S. identify as lesbian, gay, bisexual, or trans, according to a UCLA study released Thursday. This translates to 3.5% of the population as lesbian, gay, or bi and 0.3% as trans. An additional 8.2% have participated in same-sex sexual activity, and 11% acknowledge some same-sex attraction but do not identify as anything. 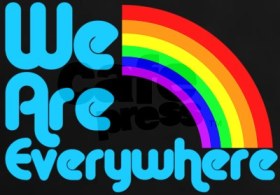 The stat that has been widely cited, especially because it’s used in this Associated Press article, is 1.7% — the percentage of the total population that identifies as either lesbian or gay, before including the 1.8% who identify as bi.

Right-wing anti-gay organizations are, predictably, very excited about that number, since it is lower than the commonly referenced 10% first cited by Kinsey. Bryan Fischer, from the American Family Association, wrote, “Homosexuals represent just 1.7% of populace. Time to stop getting pushed around by such a tiny minority.”

In an interview with AP, Peter Sprigg, from the Family Research Council, argued that the percentages, especially for bisexuality, are “somewhat of a problem for the gay political movement. It undermines the idea that being born homosexual is an immutable characteristic that can’t be changed.”

Sprigg is, of course, wrong, since bisexual is not a new way of spelling straight. And Fischer’s comment is interesting, since a lot of the American Family Association’s activities are dedicated to the idea that the “homosexual agenda” is taking over and “silencing” “believers.” But the general feeling from comments like these is that the fewer gay people there are, the less important gay issues become. Which isn’t true.

“I hold to a belief that, in the end, good science will be helpful to the community. The stereotype of the community as rich, white, male, and urban is nearly as pervasive as the 10% figure. The emergence of quality demographic data that includes questions about sexual orientation and gender identity has allowed us to highlight the diversity of the community in ways that we’ve just not been able to do in the past. Getting sound information about the LGBT community is dependent on the willingness of surveys to ask sexual orientation and gender identity questions (and perhaps show that only about 4% of the population identifies as LGBT). On the whole, I see that as a net positive and absolutely worth the risk.”

Gates looked at data from nine surveys within the past seven years and averaged the results (five were used to estimate sexual orientation, another two were used to estimate the trans population). One benefit of this method is that it gets around some of the problems in discussions of the gay population by embracing several different methods. However, there are so many potential problems/discrepancies that it would be nearly impossible to account for all of them. Such as:

+ Are people identified by their self-identity, by past sexual behaviour, by sexual attraction, or by some combination of these things? (Sometimes these things are related and sometimes they aren’t and making generalizations is counter-productive. Labeling someone else causes everyone problems.)

+ How is the transgender population defined? How are differences in gender identity, gender expression, and sexual orientation addressed? (Again: labeling someone else causes everyone problems). As the authors of the UCLA study point out, looking at some/all of these things can give a vague idea of who might fall into a researcher-defined category but still doesn’t give a full picture of individual gender identity and expression.

+ What methodology is the study using? Are responses anonymous or confidential, or face-to-face? How large is the sample size? Which questions are asked over what period of time?

+ Does the study have any obvious biases (e.g., conducted by anyone with an obvious agenda, conducted by anyone with access to a specific subject pool which might skew results, conducted via hilarious poll on the internet)? Does it have any less obvious biases, such as being uncomfortable with bisexuality, ignoring trans and/or queer folk, or asking questions in a way designed to get specific answers? What age range is represented?

The result of all of these potential variables is that nearly every study that tries to put a number on the gay population seems to come up with something different. The Kinsey Report gives the frequently cited 10% for men, 2-6% for women, but other studies have said 7% for women and 8% for men (2010), or 3.6% for women and 4.1% for men (2005). The data from the Kinsey Report has been reevaluated, with different results, at least four times. And Gates argues that Kinsey never tried to make a population-based estimate anyway, and that the 10% number was primarily a political strategy, which worked, sort of, at the time, but which should be re-evaluated.

So where does this leave us now? Does the new number bother you, or not? Will you use it plus math to figure out whether you should hit on the cute barista with the hair who sometimes gives you free espresso (answer: yes)?