This is a recap of Good Trouble episode 314: “Picks and Strikes.”

Standing up for yourself comes with some risk, as Alice found out this season when she decried the stereotype-laden sketches she and her fellow comedians were being forced to do. But Alice’s invitation back to the program doesn’t mean the risk is over, especially now that Scott’s back. This week on Good Trouble, Alice feels the sting of the backlash for her decision…and, once again, is left to grapple with the problematic dynamics of the CBTV program on her own. Or, at least at first.

A couple days of sensitivity training has Scott feeling especially “woke.” He goes through the workshop’s old sketches and weeds out the ones he now finds problematic. He whitesplains to Magda that her “Don’t Make Me Take Out My Hoops” sketch is hurtful to the Latinx community. He cuts Sanjana’s one-woman sketch for not being inclusive enough. He tosses out Derek and Alice’s sketches and declares a moratorium on accents. But instead of replacing the old sketches with ones written by the talent — as Ruby promised — Scott encourages the comedians to huddle with the writers to develop new material for the upcoming showcase. 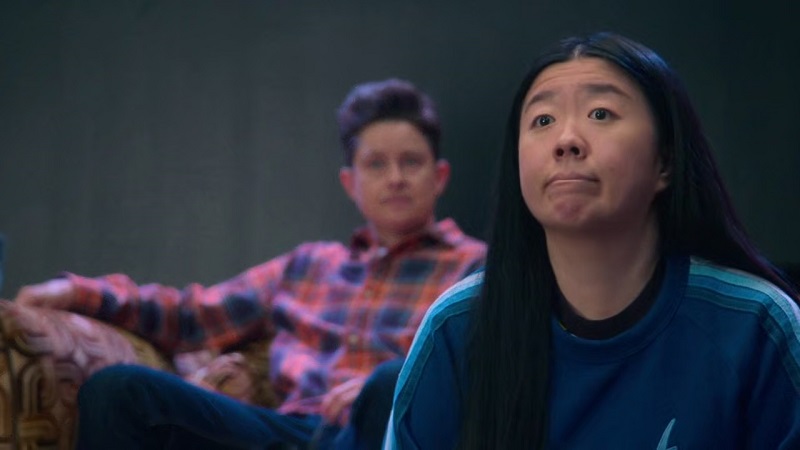 Salty that their racist sketches are being sidelined, none of the program’s writers want to work with Alice so the novice comic is left to fend for herself. It’s also worth noting that none of the other comics — who just a few weeks ago hailed the return of Alice the Conquering Hero — invite her to join their groups either. So much for solidarity.

Later, back at the Coterie, Alice turns on some emo music and collapses on her bed, regretting having returned to the program in the first place. Her lamentations are interrupted by a ghost of girlfriends’ past: it’s Sumi (!!!), ready to offer a cup of tea and a friendly ear. Apparently, Lindsay and Sumi are still together and they gave Sumi the heads up that Alice might need a friend.

We haven’t seen Sumi since early in season three and she’s returned to the Coterie with, seemingly, an entire new personality. Gone is Alice’s self-absorbed, attention seeking, flighty ex who was, almost, annoyingly effervescent. NuSumi is thoughtful, compassionate and willing to put Alice’s problems ahead of her own. The character shift is a little jarring. Should we trust this nuSumi or should we be girding ourselves for the moment where Sumi comes along and, as Davia once said, “Sumi shit up?” Or maybe that’s just the Alice/Ruby shipper in me talking…

After hearing that none of the writers want to write for her anymore, Sumi suggests that Alice pen her own sketch. Alice demurs —Scott’s rules don’t afford the comics that autonomy — but Sumi reminds her how much she’s grown. Standing up for herself and others took courage, Sumi notes, and that’s a very attractive quality. Alice blushes and bashfully thanks Sumi for the compliment but isn’t convinced that the program is worth investing in anymore. Realizing that Alice is going to need a little more convincing, Sumi suggests they go out for a drink. Alice declines the offer but Sumi won’t take no for an answer. She grabs Alice’s feet and literally pulls her out of bed. Maybe nuSumi isn’t that different from ol’ Sumi after all.

At the bar, Sumi and Alice recall their first real date over drinks — a mishap at a seniors’ water ballet class — and Sumi confesses that she doesn’t regret it. Alice doesn’t get to revel too much in their rekindled intimacy when they are interrupted by two “Asian fetish frat guys.” They are exactly as insufferable as you’d expect them to be: making assumptions about Alice and Sumi’s identities and their relationship. When Sumi wraps her arms around Alice and proclaims that they’re together, the dudebros walk away disappointed until they consider the possibilities. Alice and Sumi know what’s coming and they answer the frat guys request to watch with an emphatic “no!”

Afterwards, Alice laments being talked to that way and Sumi attributes it to the guys not seeing them as people but as fantasies. And in that moment, Alice decides to let the fantasy continue. She does her best dudebro impersonation and compares Sumi to every Asian actress under the sun. Her joke earns a hearty laugh from Sumi who recognizes its possibility: that is a sketch. 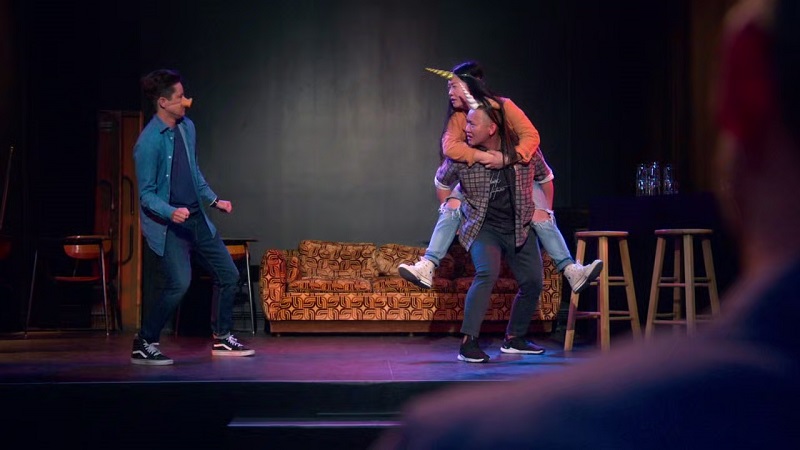 And sure enough, the next day, Alice turns it into a sketch, involving two unicorns and a pig. The sketch gets laughs from everyone but when Scott realizes that none of the writers actually wrote it, he tosses the sketch out. This time, though, Ruby speaks up and advocates for the comedians to have more creative agency. She asserts herself as the program’s co-director and demands that Alice’s sketch moves forward. The CBTV head walks in and Scott’s entire tenor changes: he pairs her with a writer and promises to deliver notes tomorrow.

Later, Alice toasts her big win with Sumi. She admits that she has changed and even if it’s all she takes away from the diversity program, it will have been worth it. But Sumi assures Alice that the program’s also going to give her an agent and talent deal. Alice isn’t so confident but Sumi urges her not to think small.

“Why couldn’t it be you?” Sumi asks…and while it sounds like she was talking about the CBTV competition, the way their smiles linger on their faces tells me that it definitely wasn’t just about the competition. But before more can be said, Lindsay interrupts and joins in the celebration. Alice excuses herself for drinks with Ruby, an announcement that’s met with an unmistakable flash of jealousy on Sumi’s face. Lindsay notices and so does Alice…who doesn’t go drinks with Ruby but, instead, sits in her loft daydreaming about her time with Sumi.

Though I’m still skeptical about this personality shift from Sumi, I appreciated that this episode gave us some insight into exactly what drew Alice to Sumi in the first place (something that was missing from their story in the first season). They have an easy rapport and effortless chemistry. But perhaps once she stops daydreaming Alice will recognize that Sumi cheated on her once and is, seemingly, ready to cheat on her current partner with Alice…not exactly someone I’d be in a rush to give my heart to. Or maybe that’s just the Alice/Ruby shipper in me talking…

+ After Gael finds Isabella searching for cribs and creating Pinterest boards, he invites her to begin imagine raising their child in a gender-neutral world. He recalls his sister’s difficult upbringing and doesn’t want to replicate that with his own child. I’m still unsure about how this whole baby story is going to play out — because they can’t raise a child in the Coterie — but if this storyline continues, I hope they delve into what gender-neutral parenting looks like in practical terms…I’m not sure I’ve ever seen that dramatized on television.

Later, though, Gael spots Isabella’s laptop open to her Pinterest board that’s covered in pink. She apologizes for what he’s seen — she made the board before she learned about Jazmin — and she was trying to change the board to make it more gender neutral. But Gael’s still moved to learn the baby’s gender…because his future as a father just became way more real. He and Isabella make plans to start talking about how they’ll handle co-parenting.

+ Callie and Mariana are both busy this week as jury selection gets underway in Tommy’s trial. Callie and Tommy are assisting Kathleen in the courtroom while Mariana and Rowan scour through the prospective jurors personal information to glean insight into how they might judge the case. A few things become clear over the course of the hour: 1. I loved Mariana and Rowan’s dynamic and hope, even if Mariana is not long for the legal world, they’re able to develop a friendship and 2. Callie is clearly not over Jamie…can she just try being single?

+ Davia and Dennis may not have gotten to perform their rendition of Faouzia and John Legend’s “Minefields” at the club but we did get to hear Josh Pence and Emma Hunton’s cover over the episode’s closing montage. Will I ever get tired of the beautiful way in which this show incorporates music? No, I will not.