“The arc of the moral universe is long, but it bends toward justice.”

It’s an often-used quote — mostly ascribed to Dr. Martin Luther King but that traces back to a 19th Century Unitarian minister — that imbues us with optimism. It fits into a narrative we like to tell about America; progress, however deterred, ultimately leads us toward equality and a more perfect union. But the arc doesn’t bend toward justice innately, it bends because scores of activists bend it. Those committed to equality engage in the long, hard work of perfecting the union. Nothing bends on its own.

That feels like an overwrought way to start a recap about a television show about a group of twenty-somethings on Freeform but Good Trouble has always been a show that’s keenly aware of the world in which it inserts its characters. They know the arc needs bending but also realize that bend doesn’t happen overnight. Since its first season, Good Trouble has understood that the problems that we face are systemic and systems rooted in oppression don’t cede power easily. Alice standing up for herself and her fellow comedians was never going to be the end of this story. Margaret Cho spilling the tea to The Hollywood Reporter about the CBTV program perpetuating racist stereotypes was never going to solve the problem. That is not the world in which we live. There is always more work to do; the moral arc always needs bending.

But I should back up a bit, as Alice starts “Shame” debating whether or not she should return to the program. Even with Scott gone, even with the comedians now leading the program’s creative effort, she can’t shake the scars from her time there. The environment was toxic, Alice tells Ruby, who explains that the new program will be totally different. Ruby admits that the program needs Alice back…that she needs Alice back…and, admittedly, I’m a little jarred by how business-like Ruby is about this whole thing. She and Alice were on the verge of a relationship and now whatever feelings existed between the two are brushed aside for the sake of this program. I’ve been #TeamRuby from the very beginning so I don’t particularly like this development. Ruby explains that her jobs on the line if she can’t fix things and, for first but not the last time in this episode, I scream, “of course!” at my television: of course, they’d hold the woman of color accountable for fixing a program that she didn’t break.

Alice admits to Malika that the reason she doesn’t want to go back is the other comedians: none of them stood up with her and, in the time since she walked out, not a single one has called to check on her. Malika reminds her that this program isn’t about them, it’s about her: Alice should get to benefit from the changes that she provoked. Malika encourages Alice to walk back into the program with her head held high and that’s enough to convince Alice to return to the program. 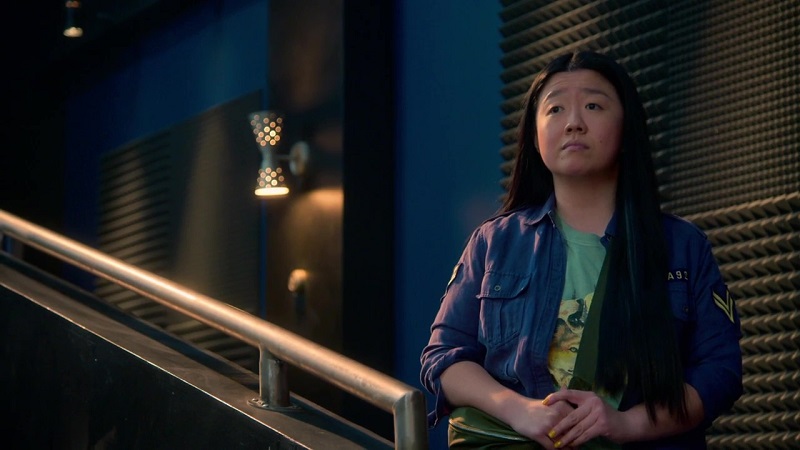 She returns tentatively but when her fellow comedians spot her, they offer her a hero’s welcome. Derek apologizes for not having Alice’s back, admitting he was too scared to step up. Magda admits that she didn’t step up because she didn’t want to risk her big break. Sanjana professes that, after Alice’s walked out and she didn’t, she didn’t know what else to say to her. Stacey admits she choked and Lindsay begrudgingly gives Alice her props. Ruby announces the changes to the program, including collaborative efforts with the writers, but for today, they’ll work together writing scenes for themselves. Everyone’s elated and they work together to produce a funny sketch…but just as they finish their first run-through, Scott walks in and announces that he’s back. This, in case you were wondering, was the second time I yelled, “OF COURSE!” at my television. Everyone’s shocked and Alice turns immediately to Ruby, as if to say, “WTF?!” Scott apologizes to the group, sort of; he treats his admission of bias as just another joke. He went to a sensitivity training course yesterday and now he’s cured of all his biases.

“Nobody wants to admit that they’re part of the problem. No one wants admit that they are racist or sexist or phobic,” Scott says, while ironically, not admitting that he’s part of the problem and that he’s racist, sexist and phobic. He thanks the group for the second chance that the comedians never actually offered him and says they’ll pick up tomorrow where they left off.

After he leaves, Ruby admits she didn’t know that Scott was coming back: CBTV is contractually obliged to give him a chance to change his behavior before he can be fired. Ruby has to smooth things over and leans onto Alice to help her. Alice rejoins her fellow comedians and now they’re all ready to walk out. They know that Scott’s problems can’t be solved by one three hour seminar and look to Alice to tell them what to do next. It’s a lot of pressure on Alice, on top of the pressure she’s already getting from Ruby, and she relents. Alice encourages the comedians to give Scott another chance, noting that he’ll be supervised more this time….and, while I hope Alice is right, I given my own personal experience with recent sensitivity training graduates, I am not encouraged Scott will justify Alice’s feigned optimism. I suspect Alice has more bending to do. 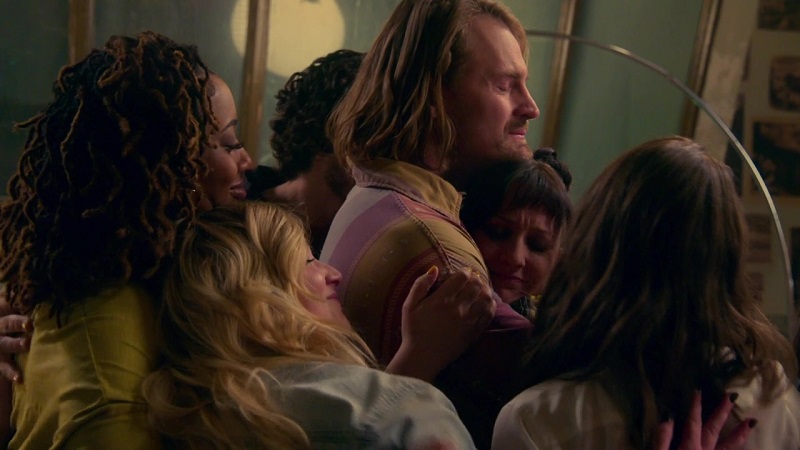 While I liked Alice’s story this week, it was Gael, Malika and Dennis’ stories that really resonated with me. They all revolve around the idea of shame: what causes it, the ways in which it manifests in our lives and why we continue to carry it, even if those moments of shame are far in our rearview. There’s a powerful message in each story about being candid about the shame that we carry and how exposing it to the light of love can finally rid us of that burden.

Gael’s impending fatherhood has him feeling the shame of his Catholic upbringing — particularly its messages around sex, marriage and children — all over again. He internalizes those messages so much that when he tries to tell his Coterie family the truth about why Isabella’s moved into his loft, he can’t. All he can hear is the Church’s judgement: what was he thinking? How could he be so irresponsible? What’s his family going to think? How’s he going to support a child when he can barely support himself? But, eventually, Gael show’s himself some grace.

“All this stuff they’re teaching you, it’s just to make you feel bad about yourself. We all make mistakes. It doesn’t mean we’re sinners, especially if you own up, take responsibility and make it right,” Gael tells his younger self, across the confessional booth. “You’re a good boy. Try to love yourself ’cause God made you perfect just the way you are.”

“Okay, you too,” the young Gael answers.

Since we met her, Malika’s been carrying around the guilt of having called Child Protective Services to report her mother for neglect. She’s carried that guilt for 15 years and her activism, though fulfilling in many other ways, has deepened that guilt. Now she knows the lack of resources afforded to mothers like hers and it makes her decision seem even more callous in retrospect. But when she admits her shame to her father, he corrects her: the shame of a 10 year old Malika having to call CPS and the shame of Malika and Dom entering the foster system belongs to him and her mother. They were the adults and they were the ones that failed them. By confronting the shame from her childhood, Malika’s also able to let go of the shame she’s carrying about Isaac. He chose to leave and work things out and that’s not her fault.

Dennis finally lets go over the shame he’s been carrying by sharing the story of his son’s death. He knows that the only want through his pain is with the help of the people around him that care and his Coterie family — even Kelly — wraps him in their warm embrace.

+ After seeing her past at Speckulate flash before her eyes during interviews with new tech companies, Mariana opts out of the tech bubble and invades Callie’s space in Kathleen Gale’s office. It’s going to be so much fun watching the sisters navigate separating their personal and professional relationships. Ha, just kidding…those girls don’t have boundaries…this is going to be a hot mess!

+ My personal highlight of the episode? This exchange between Callie and Mariana:

Mariana, donning a very un-Mariana-like Dr. Who t-shirt: I can’t believe I’m starting over looking for a new job.
Callie: I think it’s exciting.
Mariana: Says the woman who can’t get enough of starting over.

That said, I’m still perplexed that Mariana’s spending all this time around all these lawyers and no one’s advised her to sue the Fight Club for a portion of Bulk Beauty’s IP? Maybe I’ve watched one too many legal procedurals but it seems like Mariana’s work on the app should count for something.