We’re just ten episodes into The Fosters when it happens. Nine episodes after Lena shows up at a juvenile detention center, reluctant to bring someone violent into her home, only to crack when she sees a battered and bruised Callie walk through the gates. Nine episodes after Stef and Mike come in and rescue Callie, Brandon and Jude from an irate, gun-wielding foster father. Ten episodes into The Fosters, just before they exchange vows and formalize their union, Stef and Lena invite Callie and Jude to become official members of their family.

“We would like to know how you would feel about making this a more permanent arrangement?” Stef asks.

“We think you deserve a home, and we’d like it to be ours,” Lena adds. 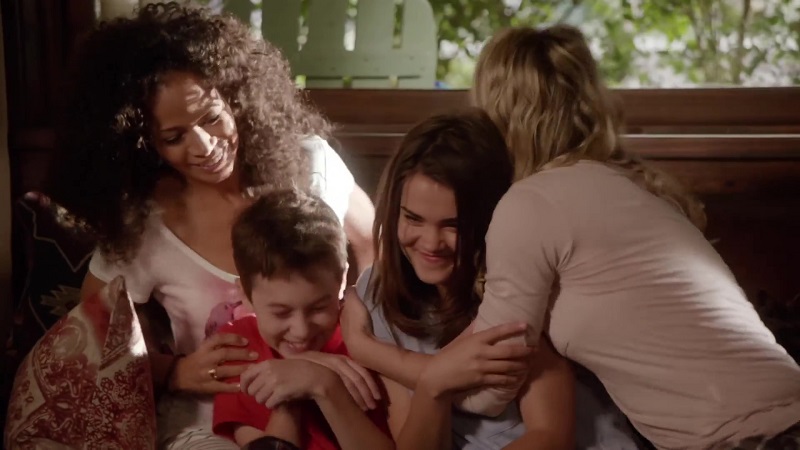 Everyone’s still in their pajamas and, for Callie and Jude, who have bounced around from foster home to foster home, it must feel like they’re still dreaming. With the support of their future siblings, Callie and Jude say yes and are enveloped in hugs from their mamas. A pair of kids who once couldn’t imagine being at one place for more than six months, were now being asked to imagine forever. A pair of kids who, for years, had only had each other, now had two mamas and three siblings to support them at every turn. A pair of kids who no one ever really wanted, found the family that would never leave. It’d be a long road before Jude and Callie would, officially, become part of the Adams-Foster clan but the trajectory of their lives changed that day.

It’s hard to imagine that Callie would be the person she is on Good Trouble if that day had never happened. Maybe she’d have the same zeal for justice but it’s hard to imagine her having enough faith in the system to become a lawyer or to take a job as a law clerk for a conservative judge, if the system had, ultimately, failed her and her brother.

Malika’s experience in the foster care system was different and The Good Trouble continues to explore her background in this week’s episode. Malika was never adopted, she was taken from her mother’s home after she — at just ten years old — called Child Protective Services to report her own neglect. They removed her and her older brother, 11-year-old Dom, from their mother’s care. What ten-year-old Malika couldn’t have anticipated is that, unlike with Callie and Jude, CPS wasn’t invested in keeping the siblings together. The social worker found a placement for Malika, but openly acknowledged, “people don’t want to take in black boys,” a sad reality backed up by a mountain of data.

The call she made at ten haunts Malika to this day: her brother still carries resentment over it and she wonders openly why she, the younger of them, was forced to take action. Her relationship with her mother is frayed… so much so that when Dom reports that their mom is sick, Malika is skeptical and reluctant to let her mother back in. When she describes her foster care experience in Good Trouble‘s pilot episode, Malika says she survived — and, through three episodes, I think we’ve only scratched the surface of the trauma that Malika dealt with as a foster kid.

The parallel between Malika and Callie is, by far, one of my favorite aspects of Good Trouble: how these two people, who end up living in the same building in downtown LA, started on such similar paths — remember, Callie was ten when her mother died and she and Jude ended up in the system — only to end up in two very different places, figuratively speaking. Given what we’ve seen Callie go through over five seasons of The Fosters, it’s hard to think of her as someone with a lot of privilege, but Malika’s presence (and the overwhelming statistics about racial bias in both the juvenile justice and foster care systems) make that abundantly clear. 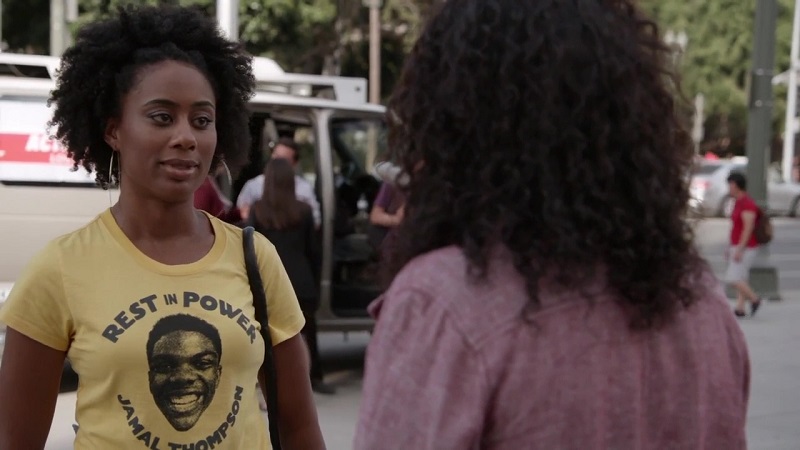 The actor portraying Jamal is also a character on All American and it’s a little jarring everytime.

This week, we get to see Malika and Callie come at the Jamal Thompson case from their distinct perches: Malika, as Black Lives Matter activist, and Callie, as a newly minted clerk for the judge overseeing the case. Malika agitates from the outside, marshaling popular support for the Justice for Jamal campaign, using social media, video and t-shirts, while Callie works from the inside, penning a progressive bench memo for her judge, advising him to prohibit the police from destroying 911 tapes that might reveal whether Jamal was targeted on the night he was shot.

Those two distinct tactics ultimately intersect when Malika’s activism catches the attention of Jamal’s mother, Sandra, and she invites Malika to sit beside her, making Malika a more prominent face in the movement, and, thus, complicating things for Callie and risking the cause’s best advocate on the inside. As the clerk, the onus is on Callie to avoid any appearance of impropriety and, according to Jamie — the Turks and Caicos hook-up/LA corporate lawyer who Callie retains for some legal advice — she’s in danger of committing an ethical violation. And there’s a shark in the water — in the form of her fellow clerk, Ben — just waiting for Callie to slip up.

Meanwhile, at Speckulate, Mariana’s dealing with the fallout from Davia’s ill-timed (but not at all wrong) Instagram post calling Mariana’s team leader, Alex, an asshole. She drunkenly called Alex several times to apologize but when she approaches him, he acts as though he never got her messages… and she believes him right up until she learns that he’s pitched one of her ideas (mentioned in the drunken apology calls) as his own. She’s understandably furious, he’s predictably sanctimonious and, ultimately, there’s no way for Mariana to really do anything about it. Casey, Mariana’s de facto mentor at work and the company’s lone female team leader, offers her some advice. 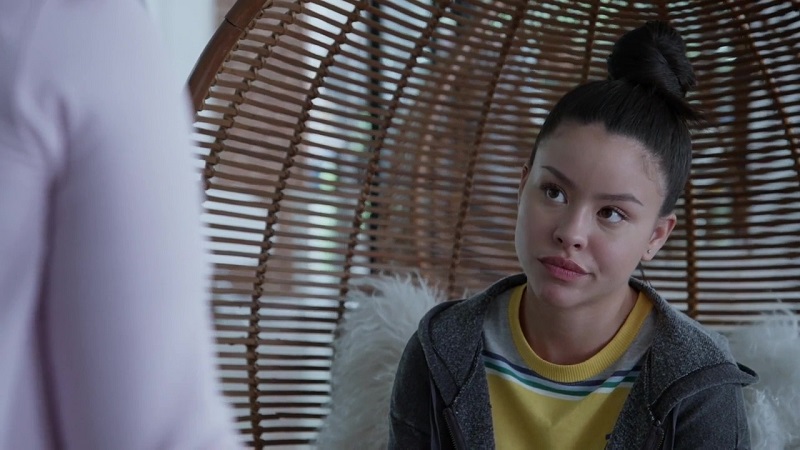 “Work harder than the boys, and eventually you’ll get noticed for it,” she recommends. “And, hey, in the meantime, make a few allies. Not every guy here is a jerk.”

Mariana takes her advice, making nice with Raj — the only person on her team to have shown her any kindness — and by staying late at work to complete the build on their application, but nothing works out as she hoped. Mariana has another run-in, literally, with the company’s CEO, this time spilling coffee all over him and cracking the screen on his phone. He’s nonplussed about it, but she’s mortified and scurries out of the staff meeting the next day to avoid his gaze. Unbeknownst to her, Speck asks about her, recalling their awkward pitch meeting in the elevator, but one of his employees lies, claiming that they reached out to set up a meeting but Mariana failed to follow up.

When Alex discovers that Mariana’s finished the code refactoring — a project that should’ve taken a few weeks to complete — he’s livid and takes the opportunity to put Mariana in her place, in front of the rest of the team. After Alex and his minion, Sam, leave, Raj rushes to apologize, but Mariana is not having it.

“Those guys? What about you? You go along with his bullshit all the time,” she chastises. “You know, being a nice guy behind his back doesn’t make you a hero.”

I feel a little bad for Raj at that moment because that was an EPIC clap back. At the end of the day, Mariana heads back to the Coterie to drown her sorrows in champagne. She might not be fulfilled but she’s being paid a lot of money to do very little work so she might as well enjoy it.