Soon after Good Trouble‘s third season debuted, it seemed like Alice was living a charmed life. She secured a coveted spot in the CBTV diversity workshop. She was building relationships with fellow comics while still showing up for her friends at the Coterie. Plus, she’d met Ruby and suddenly there was the possibility that the perpetually unlucky in love comedienne might finally find happiness. 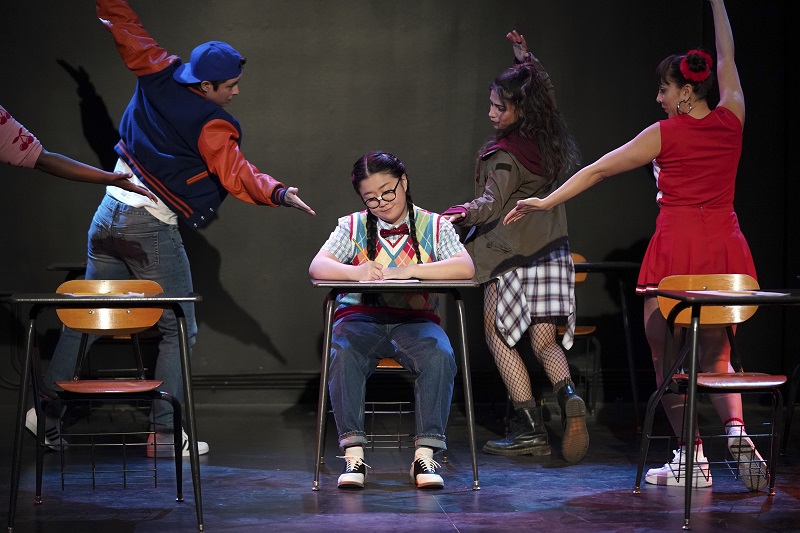 But by the midseason finale, Alice’s life was anything but charmed. The diversity workshop was becoming more draining, than fulfilling: pitting the comics from underrepresented communities against each other while forcing them to perform sketches that transform them all into stereotypes. Behind closed doors, Alice’s fellow comics are just as frustrated as she is but when the time comes for them to stand up for themselves, they’re all rendered silent. Also silent? One of Alice’s personal heroes, Margaret Cho, and her would-be girlfriend, Ruby. Alice walks out of the CBTV diversity program alone, potentially ending her comedy career and her relationship before they’ve really begun.

What does Alice’s future hold now that she’s seemingly upended her entire life? In advance of tonight’s midseason premiere (which airs at 10PM on Freeform), I talked with Good Trouble Executive Producer Joanna Johnson about that and what it felt like to watch Alice’s storyline play out against a the backdrop of anti-Asian violence during the pandemic and the murders in Atlanta.

Autostraddle: In the mid-season finale, Alice ended up taking a stand and she ends up out on the ledge by herself, despite what she’s heard from her other comedians in the program and what she also heard from her hero, Margaret Cho. Is that going to make her reevaluate if she has what she needs to succeed in the business?

Autostraddle: When she walked out of the program, she wasn’t just walking out of this career opportunity, she was also walking out on the possibility of this thing she has with Ruby. Is there any hope of salvaging that relationship and what can we expect from them going forward?

Johnson: I think Ruby has to learn to stand up. And I love Alice for saying to Ruby, “You can’t just stand up for me in private. You have to publicly do that.” And I don’t want to be in a relationship with someone who can’t have my back in public, even at the cost of their career.” And so, it’s just great to see Alice growing so much and respecting herself so much. So I think that Ruby is going to have to do a lot of… If she’s going to try to get back on track with Alice, she’s certainly going to have to prove herself.

Autostraddle: Earlier this year, Sherry Cola did an interview where she said, “Good Trouble has been a show that’s ahead of its time reflecting real life issues before the world catches up.” But when it comes to Alice’s storyline this season, it seems like the world caught up with the show in a really, really tragic way with the rise of anti-Asian violence during the pandemic and the murders in Atlanta. What that was like from your perspective to see it play out with tragic consequences in real life?

Johnson: Yeah. It was hard, for sure. Sometimes people will say that the show is ahead of world events and it’s really, really not because hatred, racism, bias and social injustice have always been here. We just chose to talk about it on the show where maybe some people weren’t talking about it. We didn’t invent them. We weren’t ahead of the curve. We were just paying attention.

Autostraddle: A lot of other shows have [touched on social justice issues] and they’ll touch on it for a little bit and then they’ll go back to being the same old show, but it’s really been a part of Good Trouble‘s DNA to tackle these issues from the very beginning. What’s the thinking behind that?

Johnson: One thing that I have really noticed in this generation is that they do care about the problems facing the world — problems that they’re going to inherit — and they do want to make a change and they do want to make a difference. They also talk about these things more maybe than other generations. So we wanted to make a show that was true to the things that people in their 20s care about. But, another thing is: you don’t have to be an activist, this is just what you’re going to be faced with this in your life, especially when you’re in your 20s and you’re trying to make a career, you’re trying to get a job. You’ve got student loan debt. You’re faced with a lot of things as a young person trying to become an adult.

Ultimately, we want to make sure that we are being an entertaining show, that we’re moving people, that we’re telling stories about real characters and the issues arise out of their real lives and their real work life and their real struggles and drama. We put a lot of humor into it too…and sexiness and all the things that make up your 20s…so that it’s not an “issue show.” We’re not trying to preach to anybody, but we’re just trying to show what it is, what you’re facing in your 20s living in America and in the world.

Tune in tonight for the Good Trouble season 3 midseason premiere on Freeform and come back tomorrow for more of my conversation with Joanna Johnson.