This is a recap of Good Trouble episode 309: “Driver’s Seat”

Last week’s episode of Good Trouble ended with a bit of a cliff hanger: sitting across from her therapist, Malika admits that she lied to Isaac when he asked her if she wanted a relationship with Dyonte. She’d been holding back for fear that she’d lose the man she loves but she’s ready to admit the truth now. She wants to pursue a relationship with her co-worker, Dyonte, and maintain her current relationship with Isaac.

The camera flashes back to the therapist who turns slightly and asks, “And Isaac, how do you feel about that?” Dear Reader, let me tell you: When she said that, I gasped… audibly. There was Isaac, sitting next to Malika, completely dumbfounded by the revelations.

I don’t like to invest my emotional energy in straight relationships but I had to make an exception for Malika and Isaac. He’s a reformed fuckboy, learning how to do better and be better to be worthy of Malika’s love. She’s a former foster kid, unused to anyone fighting for her, who had to learn to let herself be loved. I am fully invested. I love them together and I want their relationship to work, whatever that looks like. I drew nearer to the edge of my seat, waiting to hear how Isaac would respond… and then the show went off.

It’s frustrating when that happens, of course, but all I needed to do was wait a week. Just exercise a little patience and I’d get to find out what happened. So, imagine my dismay then when this week’s episode of Good Trouble debuts and there’s no sign of Malika and Isaac anywhere!

Thankfully, though, Good Trouble has been proven itself eerily capable of anticipating my frustration and providing a shiny object for me to focus on instead — and, this week, they provide not just one shiny object but two: the queering of an Adams Foster and an acoustic cover song. Somehow this show always knows what I like. 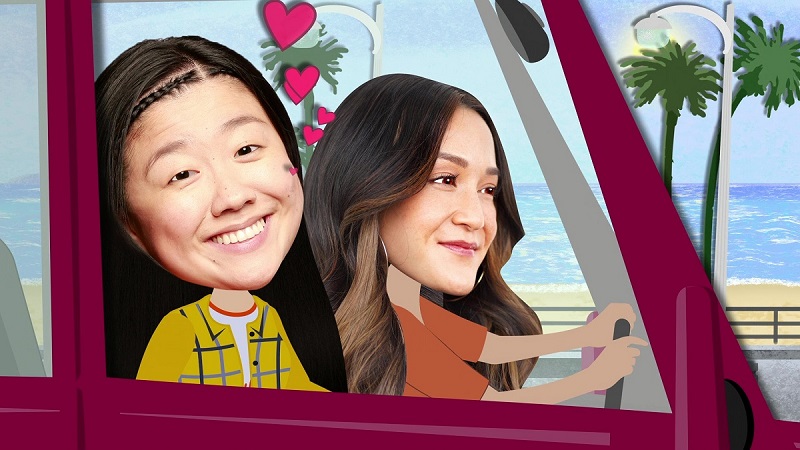 Alice Kwan has never been in the driver’s seat… not with her mom, not during her relationship with Sumi, not with her relationship with Joey (though they’re not a part of the episode’s animated opening) and certainly not in her situationship with Ruby. Alice’s attempt to wrestle away a little bit of Ruby’s control last week went awry. Rather than turn their situationship into an actual relationship, Ruby put a kibosh on all of it, for fear of things getting messy. So now, instead of spending her nights curled up next to Ruby in bed, Alice joins her fellow Coterie residents for game night.

Slowly but surely, the crowd starts to peel away: Callie has work to do for Kathleen; Gael gets called into to work by his overbearing boss, Yuri; Davia disappears and Kelly follows — after she loses the game that she created. Alone, Mariana senses that Alice is a little down and asks her what’s going on. Alice explains the situation with Ruby and admits that she doesn’t know what she’s doing.

The next night, Alice takes Mariana to Duoro and Mariana is unimpressed. She calls it a dump and an unoriginal date choice and, of course, Alice defers to her date’s opinion. Mariana chides Alice for giving up the driver’s seat so quickly and pushes her to be confident in her choices. That’s lesson #1, according to Mariana Adams-Foster: Confidence is sexy.

Once they’re seated, the tests keep coming. First, on photo etiquette: “if you must document the first date, take the pictures on your phone. That way, you can delete them if the date went badly, or text ’em later to the girl if it went well.” She reminds Alice that it is never okay for someone to try and change your look and urges the stand-up comic to pay attention to whether or not they’re being listened to. Then Mariana tries to push Alice to buy a fixer-upper with her or accompany her to her cousin’s wedding, which Alice responds to by lying instead of saying no, just like she did with Ruby. Mariana seizes on that and tries to correct Alice’s behavior. 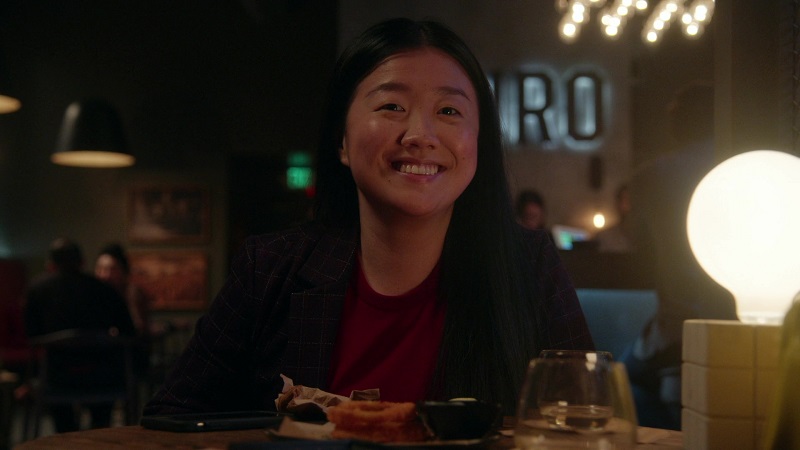 As the date goes on, it’s clear that Alice is learning the lessons that Mariana is trying to impart. She responds to her date’s indifference by abruptly ending the outing. She dismisses the suggestion that she’d look better with side-swept bangs and asserts that she likes her hair the way it is. And, instead of joining her date at her cousin’s wedding in Oklahoma, Alice puts the brakes on moving too fast; instead just opting to see where things to take them. Mariana is impressed and declares that her work here is done. But then, Alice puts those lessons to work, ordering a round of effervescent cocktails for them both… and Mariana couldn’t be more pleased.

Later, as Alice is settling into bed, Ruby texts, asking about her hot date, yet another sign that Ruby really wants a relationship with Alice, despite the break-up. Alice texts back, admitting that it was only a friend date. She recalls Mariana’s advice — know what you want and ask for it — and decided to tell Ruby the truth.

“The truth is, Sanjana and I were never really dating,” Alice admits via text. “I just said that to make you jealous because what I really want is… to be in a relationship with you.”

She clicks send and holds her breathe while she waits for a response. Having been in this situation before, the wait is agonizing, so I deeply related to Alice’s fidgety behavior while she waits to hear back from Ruby. She finally responds with, “let’s talk about it,” which is far more vague than I’d hoped for but clear enough for Alice. 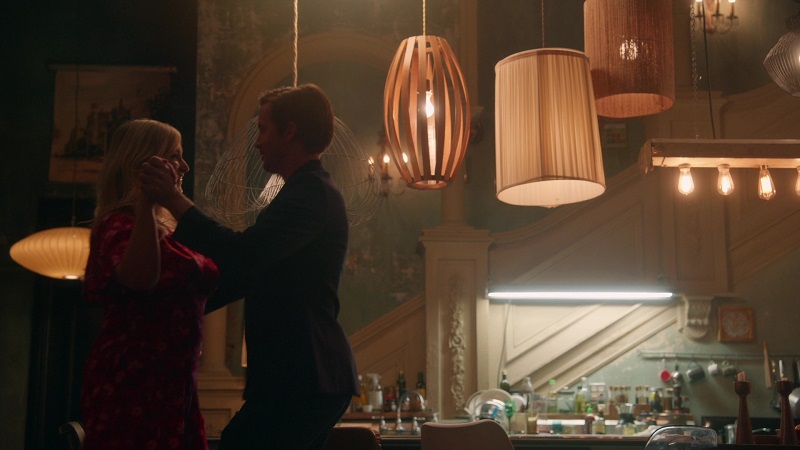 Turns out: It’s date night for everyone at the Coterie! Davia finally agrees to go out with her adorkable colleague that’s been shooting her heart eyes all season. But everytime Davia moves closer to Matt, Dennis re-emerges — with messages and pictures — that make Davia second-guess getting involved with anyone else. She finally puts her phone in “do not disturb” mode and settles in for her first date with Matt. Things go great. He remembers how she likes her calamari (“no tentacles ’cause the texture freaks [Davia] out”) and he regails her with stories about growing up in the South and going to cotillion.

They head back to the Coterie afterwards and Davia offers Matt a drink. He responds with an offer to teach Davia “the proper way to drink tea,” which, speaking as a fellow Southerner, is 100% something I would say. She asks about the usefulness of his cotillion skills, like ballroom dancing, and Matt admits it came in handy at his brother’s wedding. He volunteers to teach her how to waltz and extends his hand to Davia. They dance around the Coterie dining table and it’s just so cute. After he dips Davia, they draw close…. and just when it looks like they’re about to kiss… Davia remembers her night with Dennis. She shirks away from the kiss and Matt rushes out, smarting from the rejection.

Later, Davia facetimes Dennis and he’s practicing on his guitar. Davia pushes him to play the song he’s learning… and then he starts strumming and sings Sara Bareilles’ “Gravity.” It’s the perfect song that stands in for the conversation that Davia and Dennis need to have but can’t. Dennis sings, “Something always brings me back to you, it never takes too long/ No matter what I say or do, I’ll still feel you here ’til the moment I’m gone.”

And Davia asks — no begs — for him to let her go, singing, “Set me free, leave me be, I don’t want to fall another moment into your gravity/ Here I am and I stand so tall, just the way I’m supposed to be/ But you’re on to me and all over me.” They go on and sing together — a nice throwback to their duet from season two which I also loved — and try to work up the strength to move forward…. whatever that means.

"You loved me, cause I'm fragile." Every second of @JoshPence and @EmmaHunton singing together feels like pure magic. ✨
____________
Listen to their cover of "Gravity" from last night's episode now: https://t.co/ji83tpwt5G pic.twitter.com/P2m2oVwJd2

The next night, after the Equity Committee meeting, Davia apologizes to Matt for how their date ended. Matt offers his own apology: He knows that Davia’s just getting out of a relationship and it was too soon to try and kiss her. But Davia insists it wasn’t too soon and that if she could, she’d go back and change what happened. Matt acknowledges her regret and then, as she’s walking away, Matt pulls her back into a kiss.

The real thing driving Davia’s change of heart? Her belief that Dennis is preparing to make his retreat permanent, since he talked to Alice about giving up his loft.

+ The pacing of these last three episodes have really been Good Trouble at its best.

+ While Gael and Callie seem to be moving closer to a reunion — he invited her to attend his boss’ art show with him — he seems a bit gun-shy to me. Davia encourages him to make a move on Callie before her co-worker, Tony, does but the prospect of battling another “Ken doll” lawyer (to borrow Katherine’s expression) for Callie’s heart seems to leave Gael a little weary.

Next week on Good Trouble: A Margaret Cho guest appearance!