This week on Glee, nothing happened, which is unfortunate, considering all the things that could have happened. The episode was titled “Night of Neglect” because it neglected to do the following things:

We open in Glee Club, a motley crew of children who like to make out with each other and all look about 25 but are supposed to be 17. 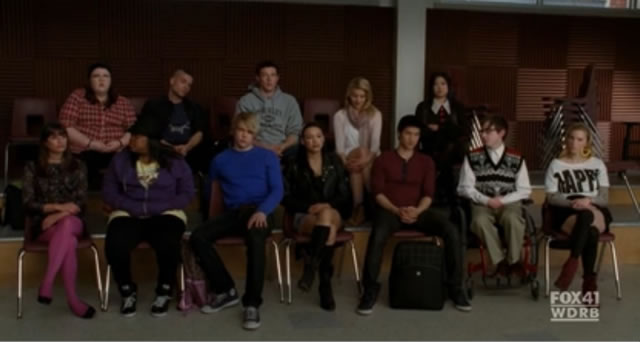 Mr. Shu has done an unofficial poll of the over-40s and under-12s in the Mackinaw Island, Cape Cod and Niagara Falls area and has concluded that the best way to save Glee Club is to sell saltwater taffy to students, who typically have no access to saltwater taffy at all whatsoever (like crack!). Though honestly if they live in Lima, as I’ve mentioned, there’s a Cracker Barrel there, which sells saltwater taffy.

If you eat too much Saltwater Taffy it removes your teeth from your skull and if you eat it while pregnant then your baby might turn out like Brittany, who is hot and can dance and didn’t tell Santana she wanted to be her girlfriend but also says things like “I love saltwater.” True story. Don’t drink & drive! 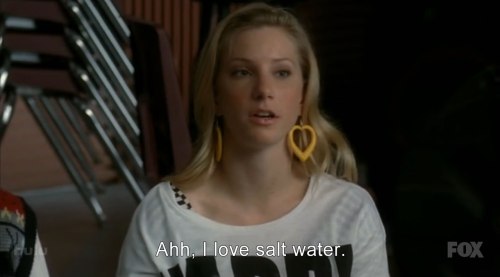 Santana says nobody’s gonna buy tooth-extracting-taffy from Gleeks ’cause nobody likes Gleeks, and despite Santana being a very pretty/witty/gay lesbian with perky breasts, even she, SANTANA, gets slushies tossed in her face when she’s just trying to fantasize about Shane and go to class.

We flashback to the incident, wherein Katstiasgayguy steps into the frame and says “I’m So Sorry” in a weird voice that makes him sound like Patrick Swayze in To Wong Foo. 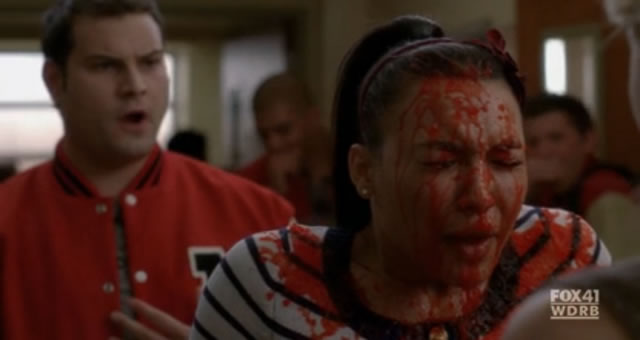 This Reminds me Of Carrie in the Worst Way Possible

You know, one time working at The Olive Garden I spilled a Strawberry Daquiri on this woman’s leather jacket and we had to pay her dry cleaning bill, which means The Olive Garden is better to its patrons than McKinley High is to its students.

Anyhow, the Asian Guy gets super upset ’cause he’s neglected — he’s not selling taffy until somebody sends him a some-e-card about how the Just-Now-Invented-for-Unclear-Reason “Brainiac” Club won the Big Champion Prize last week on the teevee. 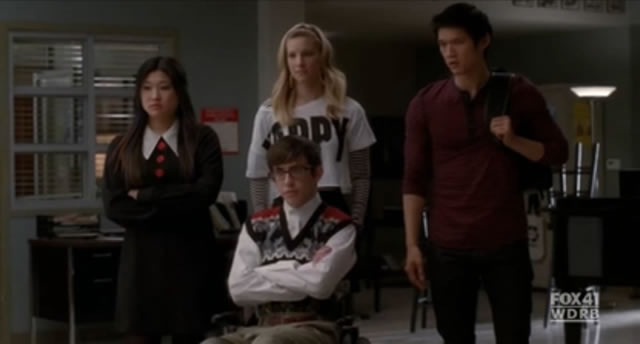 We flash back to the games, where Brittany eats Dots, probably culled from the Halloween candy baskets of every kid in the universe because who the fuck wants Dots, it’s worse than Good ‘n Plentys or Mounds or whatever, and answers a series of questions about cat diseases which she aces. Cats = Lesbian. 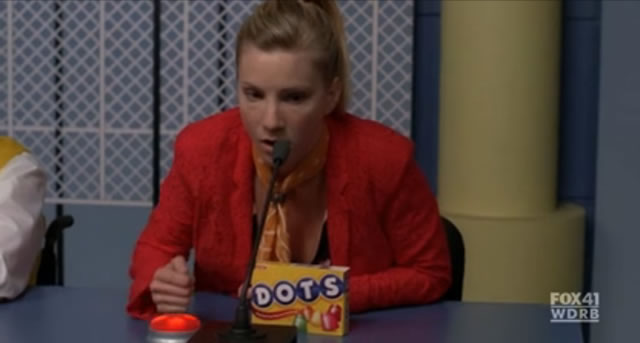 The final round of the Trivia Olympics is about white rappers, and Artie reacts like I would if I was in this show and the category was white r[ec]appers. Also, Sunshine Corazon – that character they dropped like it was hot after the first episode of Season Two – has reappeared on the opposite team.

So the point of this is that Glee Club might need $5,000 to go to The Regionals/Finals/Bicentennial but the Cranium Club needs money to go to their Big Game or whatever. I’d suggest the advisor of the Brainiac Squad handle that one his or herself, but this is Glee, and nothing is real, and it only costs $250 to ship all four of them to Detroit for finals and let’s be real here: Detroit is a bargain. I grew up in the area and am obsessed with the history of Detroit, we can discuss this at another time. Mercedes could just sell her yellow shoes on ebay. 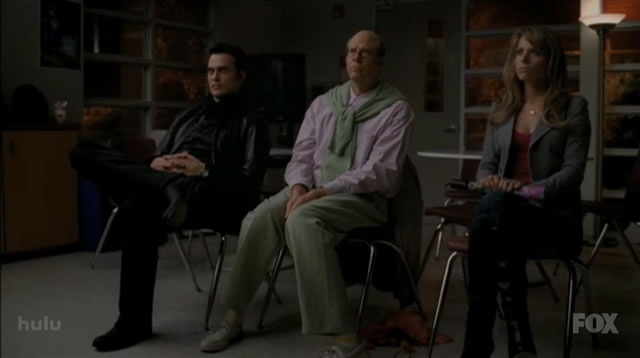 Sue Sylvester has assembled a legion of evil to destroy the Glee Club by, I believe, heckling? It’s like Pinky & the Brain-meets-one-of-those-movies-with-superhero-teams-like-The-Incredibles (or that neglected movie I saw 15 times, Meteor Man). 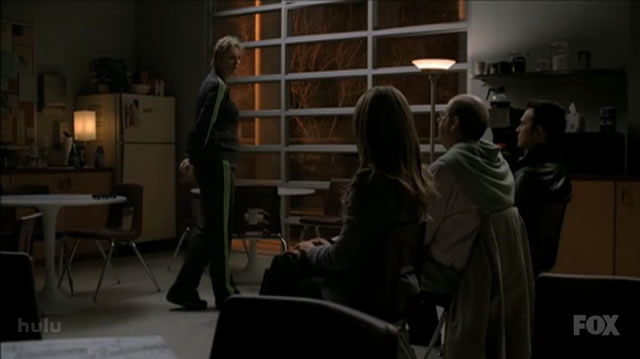 In honor of 420, we learn that Sandy now sells medicinal marijuana. Furthermore, Cheyenne Jackson’s character is straight but Sandy’s gonna hit on him anyhow, because he’s “predatory gay.” Did the writers forget that there are straight people watching this show and you can’t tell the jokes you can only tell around your gay friends.

Holly Holiday talks Mr. Shu into ditching the taffy idea in favor of a benefit concert entitled “A Night of Neglect” in which the children will perform songs by neglected artists. It’s a totally illogical ridiculous idea that will never work, but provides a weak structure upon which lines can be written and songs can be sung. 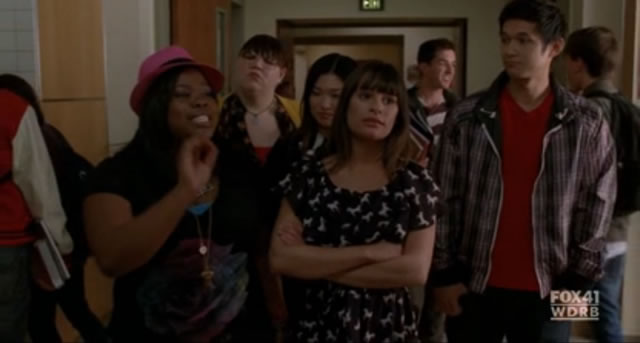 Mama Who Bored Me

So then Sunshine Corazon, sporting a lesbian beanie from The Real L Word and a Wheres Waldoey tube-top/dress thing pops up, just like the sunshine itself does every morning in Whoville.

Sunshine wants to be in the show too because she has been neglected by Glee in general for never serving a useful purpose, including now. She has 629 Twitter followers which guarantees a trending topic/packed house. Listen, I’ve got like 2,000 Twitter followers and you don’t see me busting my ass into the March of Dimes. 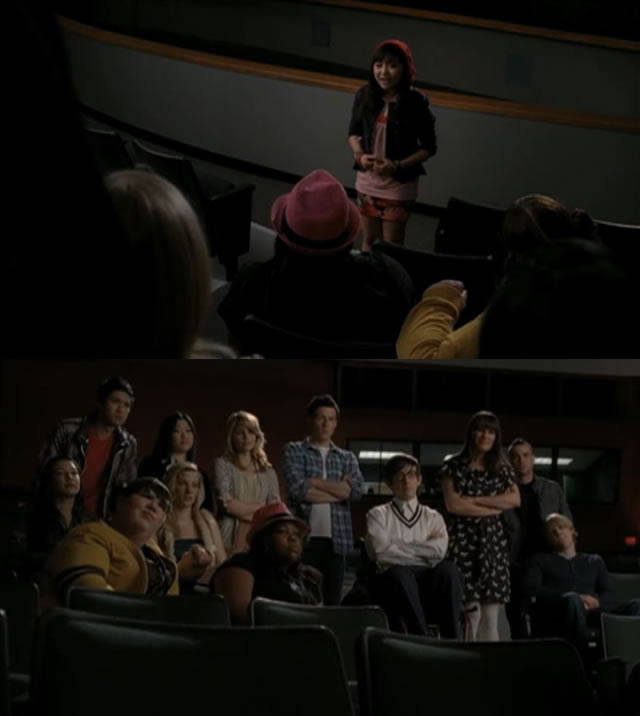 Unfortunately — because she kills the song, I mean this girl is super good, and I’m 75% sure Brittany Spears herself woke up from her prisoner-coma to design that microphone — Sunshine is very wrong to claim that All By Myself is a neglected song.

Need I remind you of this: 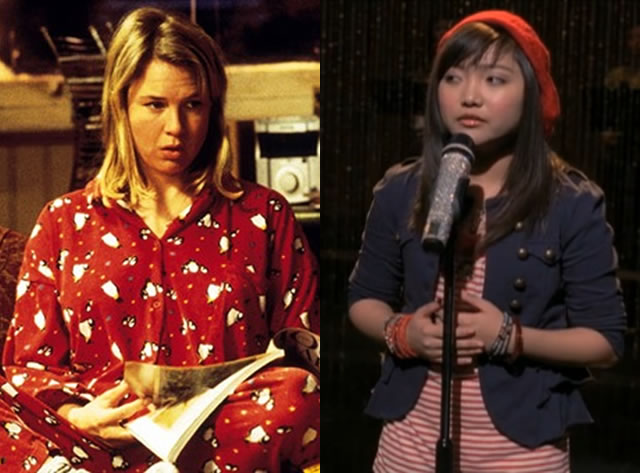 You Once Said You Liked Me Just as I Am

Rachel says Mercedes will get “bumped” if Sushine joins in so that Rachel can maintain her headlining position, which I’m 75% sure is racist.

Also can I mention that Rachel has been to Hilton Head with Ian Thomas, stole the velvet fabric lining off the walls of the Ritz Carlton Cigar Room and turned it into this horse-covered frock situation that almost — ALMOST — distracts entirely from her being like Beyonce and Mercedes being like those neglected girls in the movie Dreamgirls, which is the only film I saw in all of 2006. 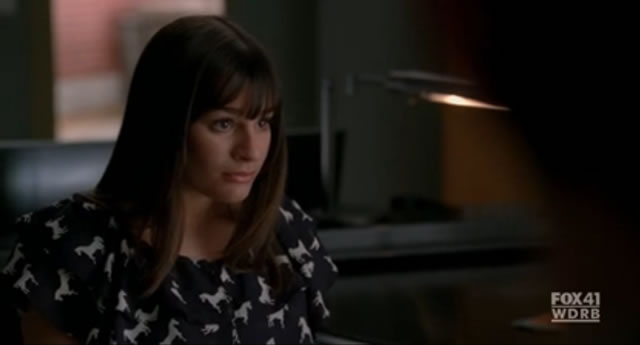 Lauren is concerned that Mercedes isn’t asking/demanding enough respect ’cause she so willingly took back seat to Rachel. Also, look at Mercedes’ shoes: 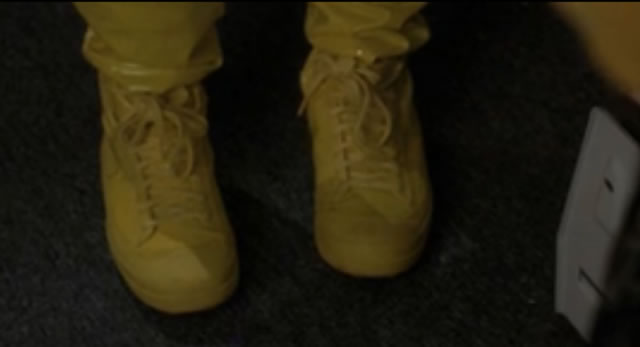 Lauren: “Respect isn’t something you can ask for, you have to demand it, and you deserve it.”
Mercedes: “You don’t seem to have trouble in that department.”
Lauren: “Right, but you know what, neither does Aretha or J-Lo or Maria, you know why? Because they get proof every day. I heard Mariah makes appointments at 9, shows up at 4 in the afternoon, because she knows people will wait.” 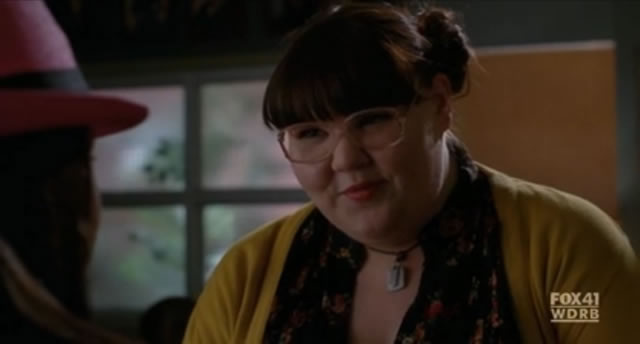 Lauren will fix this by becoming Mercedes’s manager. I know, it doesn’t make any sense. Just wait for the gospel choir.

So Uncle Jesse is annulling his marriage with Emma ’cause they never fornicated. Then Emma directly addresses her OCD for maybe the first time ever, idk because usually during scenes featuring solely Mr. Shu and another Rydell High Staff Member, I head out to make toast or fix another drink. I don’t even know why I’m sitting here.

Anyhow, for the first (or maybe tenth time), Emma GETS REAL. 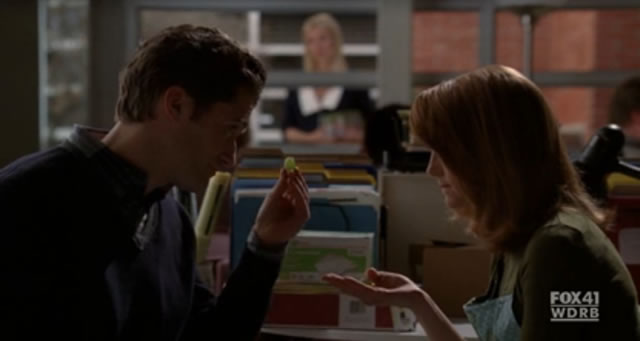 Emma: “I actually believed that I’d have a handle on my OCD by now, it’s just been so long, and I’m so tired.”

God, and isn’t that the fucking truth? As much as we’re in love with our sadness/ destructive tendencies sometimes, when push comes to depressive/obsessive/manic shove, it’s just — it’s just “I’m so tired.”

Mercedes is making demands about M&Ms, as M&M selection is a thing journalists are obsessed with when talking about celebrity’s dressing room demands.

I’m excited that all signs are pointing towards the Mercedes number we want at least twice as much as Mercedes herself does, but must we get there via this weirdo plot?

Finn & Quinn approach Rachel in concern, Rachel says that stars obviously make demands b/c they need what they need and everyone knows Blue M&Ms are GM foods manufactured by someone who probably exploits something, somewhere. Rachel says she’ll take care of it. 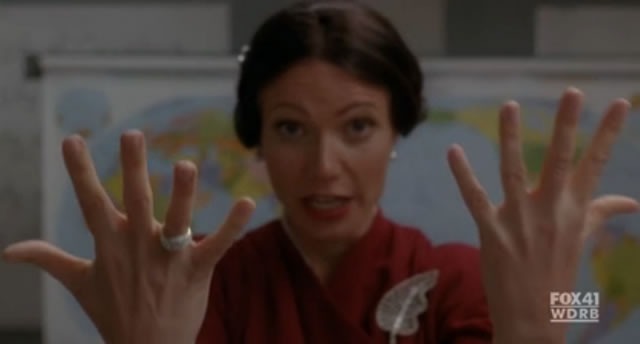 Also she’s dressed like Star Trek Generation meets Memoirs of a Geisha meets the late 80s. I love it. 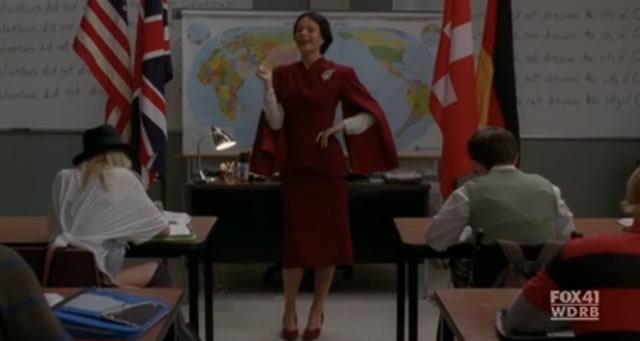 Cheyenne Jackson arrives to hit on her. Ryan Murphy is doing his part to prove that gay actors can play straight, one gay Broadway dude at a time. Cheyenne has a thing in his ear, probs so he can communicate with the other Old Navy Team Members. 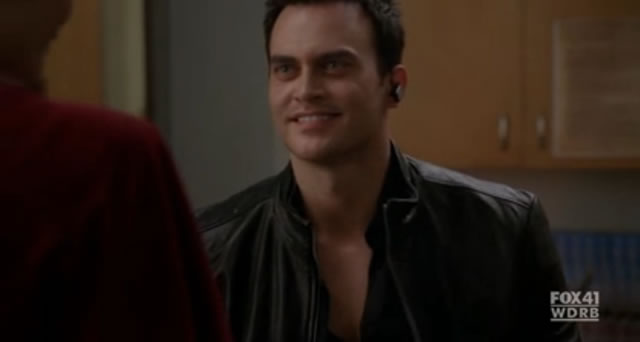 Cheyenne tells Holly that Will has small hands. This is the most lesbiany part of this episode so far, unfortunately. WHERE THE FUCK IS SANTANA’S LEZBOVADGE.

Mercedes/Rachel demands things like if she doesn’t get to headline everyone has to carry her around like Lady Gaga in the egg / somebody at their wedding / babies before they can walk. 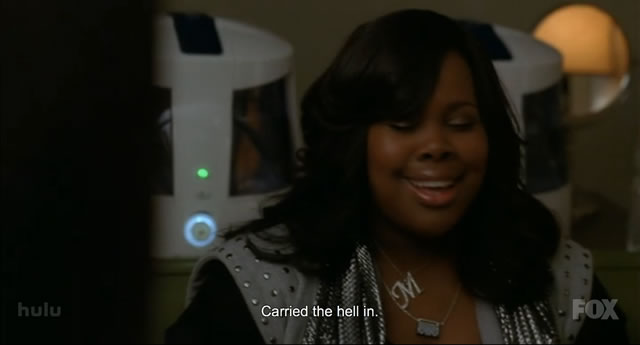