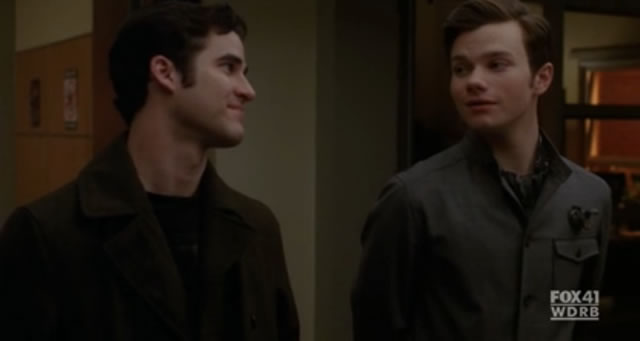 Kurt & Blaine in complementary pea coats have brought their adorable selves down to school for world’s most bizarrely conceived “fundraiser,” probably because they follow Sunshine on Twitter. Kurt misses his friends, Blaine observes in the cutest voice possible. But before Kurt can get too wistful, it’s Kissathophasky, emerging like the beast he is from the bowels of the building. Kartoshpshaky has taken a break from “pumping iron” (really who says that? the Terminator?) to regulate the “fairy dust” he hears Kurt & Blaine are spreading all over the hallway. Okay, if you want to blame contagious fairy dust for your case of the gays, Kartopskgay, then go for it.

Blaine: “You can live whatever lie you want, but don’t pretend that the three of us don’t really know what’s going on here.”

(Kartosskyphy is jealous of Blaine because he also wants to roll in the hay with Kurt Hummel, knew about Lance Bass before you did, etc.) 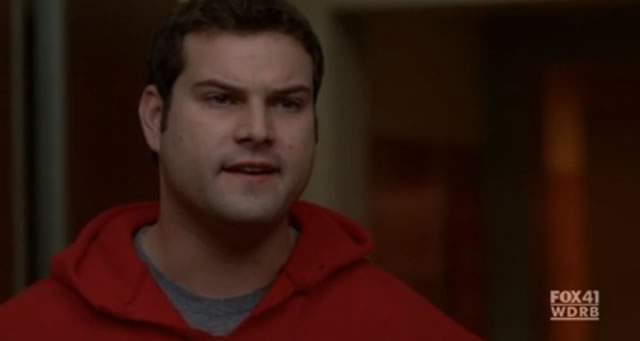 Then a pushing fight begins which is interrupted by Santana — who, by the way, has a dead muskrat on her shoulders but I cannot get mad at her blood-red dress — who gets all super Santanaish up in his face saying whatever he does is her bizness ’cause he got that slushie all up in her grill and she does not mean the kind you make hamburgers on, she means the other kind. 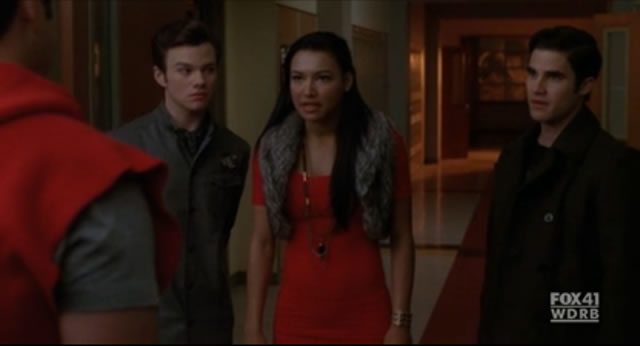 I have not fingerblasted anyone in this entire episode. IN THIS ENTIRE EPISODE. WHAT ABOUT MY IDENTITY?!

“I think I can take a couple of queers and a girl,” says Karstarterosky. Little does he know it’s actually three queers. Also sexual orientation and gender identity are not the same thing. Santana will have none of this: 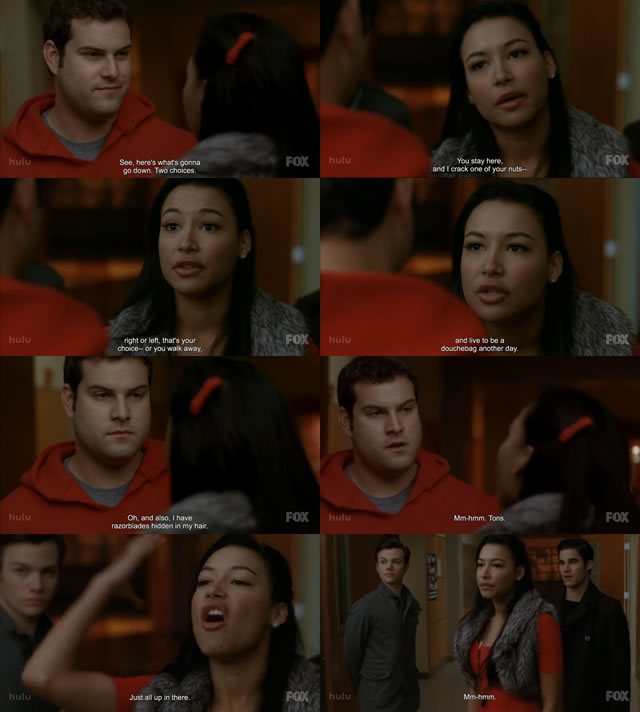 BEST SCENE OF THE EPISODE.

Sunshine, however, in the tradition of being a total peripheral unnecessary character who wasn’t even in Spring Awakening but is super-cute and a great singer, has announced on Twitter that she’s not going to the concert. Therefore her 637 followers, who I’m certain all resided in the Lima Metro Area, are untying their shoes and taking off their hats and settling in for a rerun of Dr. Quinn Medicine Woman. 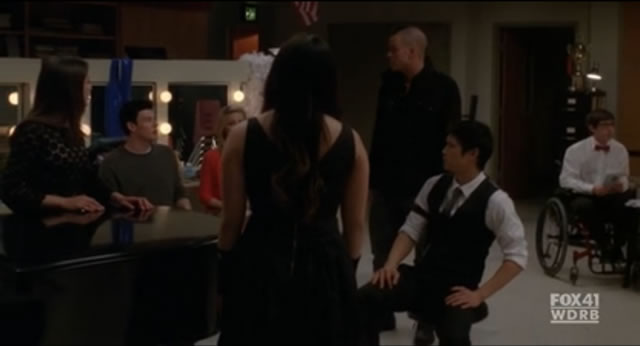 Finn says, “whether there’s 6 or 6,000 people out there, we have to give it our all,” which I’d argue is definitely not true.

Sue’s Evil Hecklers are in the audience yelling at Tina when she heads out there to do her thing which is sort of a mystical lighting situation that seems perfect for like, people having sex on opium. It sucks that she’s booed off because I feel bad for Tina and also because I genuinely wanted to see the rest of her performance. 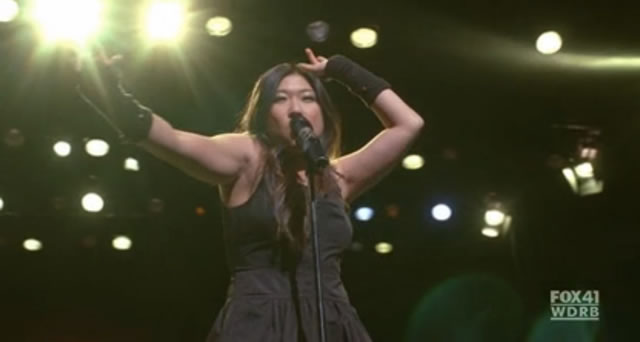 Quinn passes out taffy like Little Red Riding Hood, reminding them to vote Quinn for Prom Queen, which might be the only element of this episode that ties into anything else that’ll ever happen, ever. 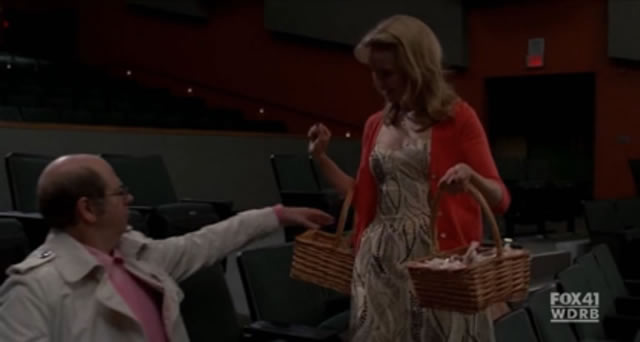 Someone has the munchies

The hecklers, silenced by the sound of their own fillings cracking open, witness MIKE DANCING. YAY! Mike Cheng is gonna do his badass best to get me to like Bubble Toes half as much as I did for about 3 months in 2003, a feeling which has since faded — ay! not faded! — burned out completely. GOD I HATE THIS SONG. I feel like this performance maybe should’ve been about “songs that were totally overplayed and irritating, repackaged.” 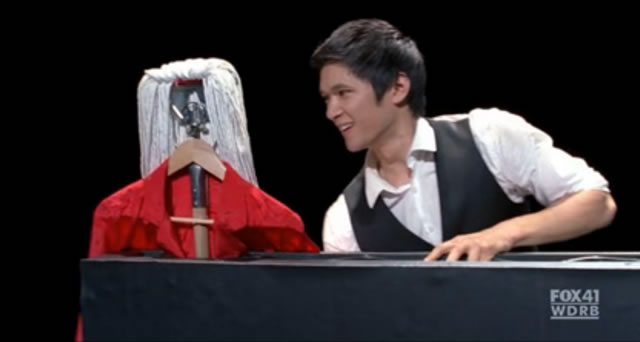 Step it Up 5: Thousands Cheer with Gene Kelly and Mike Cheng

My re-package would’ve included Brittany in this dance number, but maybe she’s playing Scrabulous. There are some clips from Mike’s performance in this video:

Now we have a little PSA from The Creators of Glee about how internet hecklers/trolls are losers. I hope this works in the same way that having all these gay characters turned all the children gay. 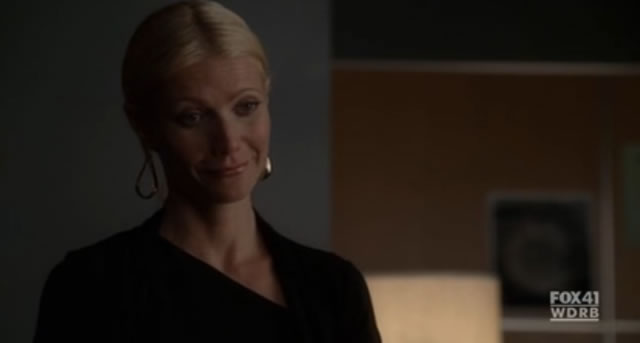 Jacob (yes I had to look up his name on IMDb): “Technology has allowed us to be brutally cruel without suffering any consequences. In the past if i wanted to tell someone they sucked, I’d have to say it to their face, which would generally result in my ass getting kicked.”

This is tricky, and I kinda like it — rolling out the idea that these internet bullies are just the humans getting bullied every day? When you ask yourself “who are these angry, angry mean terrible people saying terrible disgusting vile things on the internet all day for no reason?” Maybe it’s people who are already mad at the world for shitting on them all their lives. It’s people who, as you may have predicted, honestly wouldn’t ever say this shit to your face, because your face is precisely what scares the shit out of them. 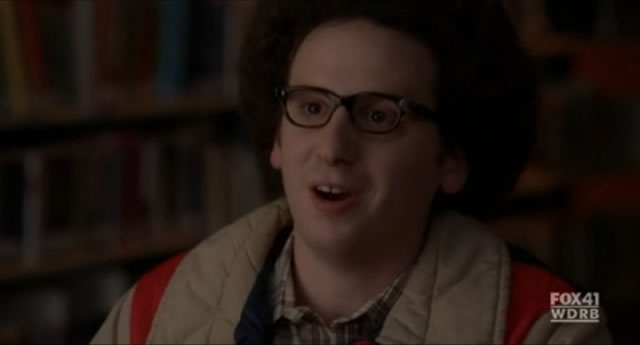 Holly:“We’re constantly bombarded with these images of people who are richer than us and happier than us and have more interesting sex than us and it makes us feel terrible–”
Becky: “Preach!”
Holly: “You know, we tear them down to make us feel better ourselves. And we don’t stop with the people who are on TV or who are in magazines, we do it to everybody. We think that because it’s done anonymously, there are no ramifications. But there are ramifications, guys, because it makes you comfortable with insensitivity. Do you know that one of the girls you heckled tonight has been crying for an hour?”
Azimio: “You’re saying you never ragged on anybody?”
Holly: “Oh of course I did! I spent three years sending hate mail to Debbie Gibson until she wrote me back and said the stress of my letters was giving her alopecia and then I felt terrible because I realized it was just my jealousy that she could fill a mall with her adoring fans. You guys are great kids. Some of those insults were RAD — but just think how about how you could uplift the world if you turn some of those barbs into roses. I mean, intermission is almost over, why don’t you get back in there and turn some of that jeering into cheering?”

OMG this is exactly what I said to Perez Hilton. Rather than cheer or smoke up with Sandy, they all head home to play on 4Chan.

Suddenly it’s raining on the set. “It’s raining!” Rachel tells Mercedes, who is sulking in her Sports Utility Vehicle, where Rachel has gone to retrieve her and bring her back to “save the show.” 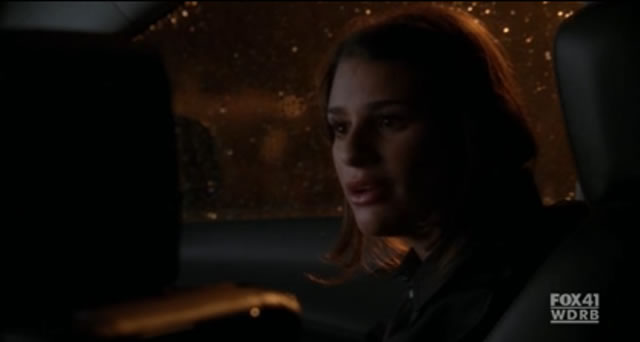 Mercedes: “I just don’t get it. Why are you a bigger star than me? You always get the big solos, the best songs, the moments in the sun. Why is it never me?”
Rachel: “I don’t know, I mean you’re just as good of a singer as I am.”
Mercedes: “Yeah, and everyone actually LIKES me.”
Rachel: “That’s your problem! Because I would rather be a star than be liked. And I’m not saying that it’s healthy and I’m not saying that it’s better than being loved but there’s nothing — nothing — that I wouldn’t do for the chance to be in the spotlight.”
Mercedes: “I just really wanted that closing spot.”
Rachel: “Well if you want that closing spot, then go in there and take it from me.” 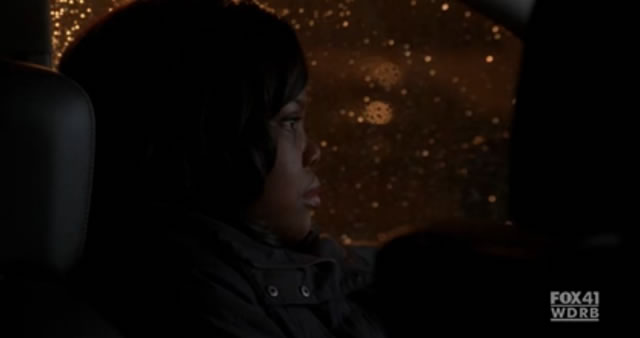 Holly Holiday wastes our time with a solo, Sue yells at the gay guy from Central Casting, and then Mercedes says she’ll sing. 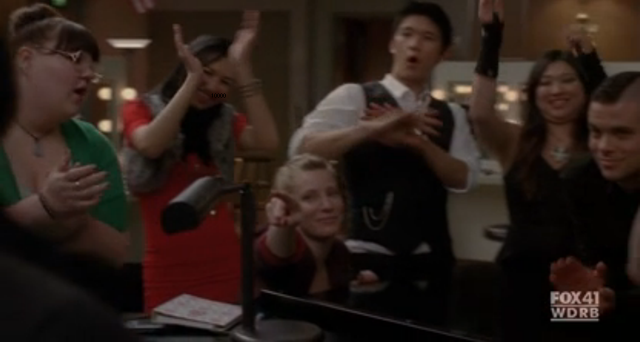 That’s Heather Morris saying YOU GO GIRL in a secret Heather Morris language only spoken by people who manage to make “whip your hair” a legitimately sexy dance move.

Also Mercedes has somehow procured an entire gospel choir from that little clown car/SUV of hers. Expensive benefit. Where’s George Clooney. Rachel is standing backstage with her hand at her breastbone, feeling upset because Mercedes is so good, duh, probably Finn is gonna like her too now. 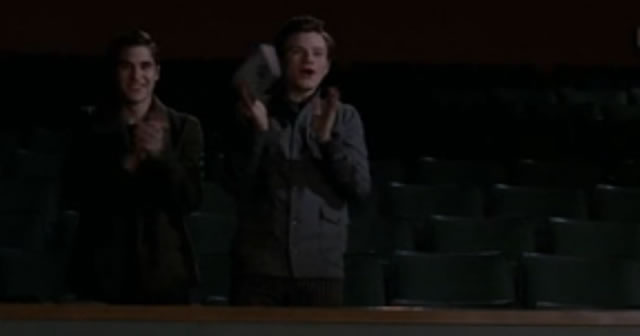 At the end they get the money they need for whatever, which wraps up this little plot device and our evening.

“That song and the weed I smoked prior — it gave me a change of heart,” said Sandy. Me too, me too!

“I miss The Arts, I really do,” says Sandy. Us too, Pink Panther Dagger Sliceshot Caped Banditgay, us too.

Well! That was fun. Please return next week, in which the entire Glee episode will be dedicated to The Macarena. You know what I just thought of? Even though saying that Kelly Clarkson is a lesbian is like a 75% lie because I really have no idea, wouldn’t it be cool if she was a lesbian and she came out on this show and they had a Kelly Clarkson episode and Santana and Brittany sang “Moment Like This” to each other. Think about it.

Look at this gif, isn’t it cute?

Riese has written 2780 articles for us.