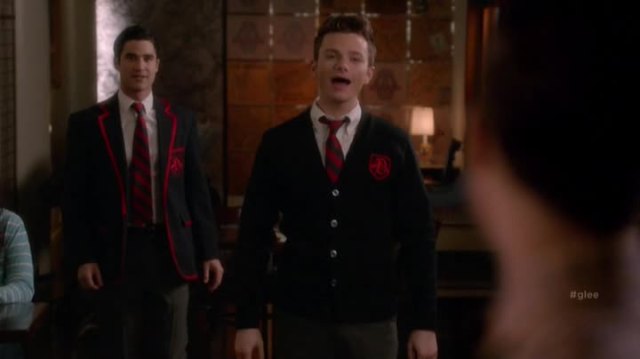 Kurt, no! You can’t give yourself a sports almanac from the future! You’ll rip up the space-time continuum!

At the world’s only sheet music store, Blaine and Kurt bump into each other while looking for the soundtrack to Smash. Karofsky is there too, wrapping his arm around little Boo-Boo Warbler, talking about how he’s trying to help Blaine plan for Sectionals but you can’t get this guy off Broadway or even off Off-Broadway. Kurt manages not to throw up this time, looking at those two guys touching each other, but he does spiral into a maudlin performance of Carole King‘s “It’s Too Late,” which her performs with his former self and Blaine’s former self and also Blaine’s current self, while flipping through photos of the Good Ol’ Days.

(Does anyone over the age of 25 hear Carole King and not think about Gilmore Girls? I kept imagining Lorelai showing up and shaking Blaine like, “If you’re gonna throw your life away, he better have a motorcycle!”) 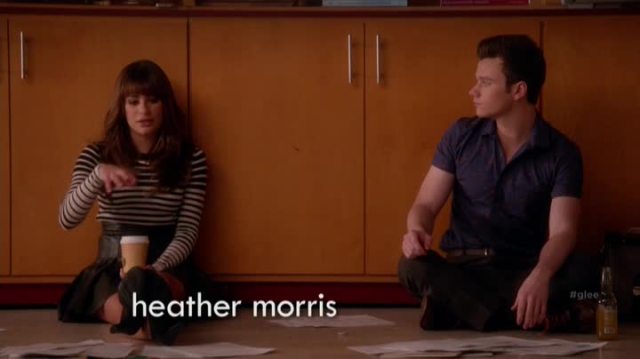 Are you drinking a beer? Did you get that from Mr. Schue’s old office? If so, it explains a lot.

The next morning, Kurt and Rachel plot the weekly glee club lesson, and I must say: looking for music months prior to big events and planning lessons before class even starts is such a kangaroo-sized hop forward from Mr. Schue’s fly-by-the-seat-of-your-khakis brand of preparation that these four new kids whose names I will never remember (except for dear Jane, of course), might actually have a chance at winning … whichever of the choir competitions comes first. Sectionals? Regionals? Provincials? Factionals? Oh, man, you know what would have made this show one hundred times better? If it was called Factionals and it was about these warring factions of teenagers who compete against each other in singing and dancing and hand-to-hand combat. Like High School Musical meets Mortal Kombat. Sue could have taken over New Directions and, finally, Quinn could have had the heroic storyline she deserved!

Kurt wants to do Carole King’s Tapestry album this week, because of breakup feelings but Rachel says if they’re going to do heartbreak albums it should be something more modern, like Alanis Morisette‘s Jagged Little Pill, which, according to my calculations, was probably released the year Rachel was born? So, “modern.” Kurt and Rachel decide to do mash-ups instead of fighting with each other about who is right. For now. 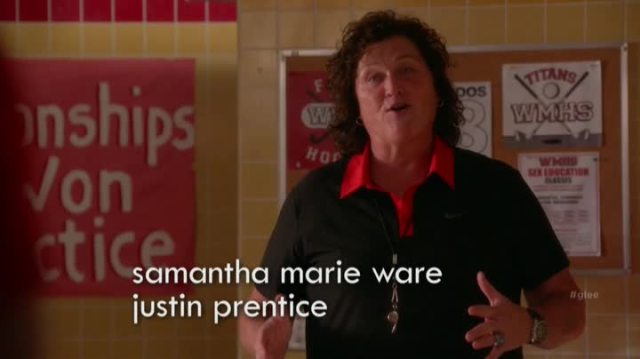 Sorry I’m late, I’ve been runnin’ all over hell’s half acre like a one-legged cat in a sandbox!

In the football field house, Sam is ironing jock straps when Coach Bieste storms in and starts yelling at everyone and throwing out those bizarro colloquialisms we’ve grown to know and love. Like something about how you can bake a pie with rhubarb but you can’t eat the moon? Beiste is cool with Sam but rageful at Postmodern Gay, who thinks he deserves the start as QB1 this week, but Beiste thinks he deserves to get eaten by a pack of wolves. It’s all very erratic and troubling and after Beiste is gone, Sam, who has spent the last ten minutes using the reflective surface of the iron to fix his hair, says it’s a tough break because Postmodern Gay is a majestic knight on a unicorn and deserves a shot. 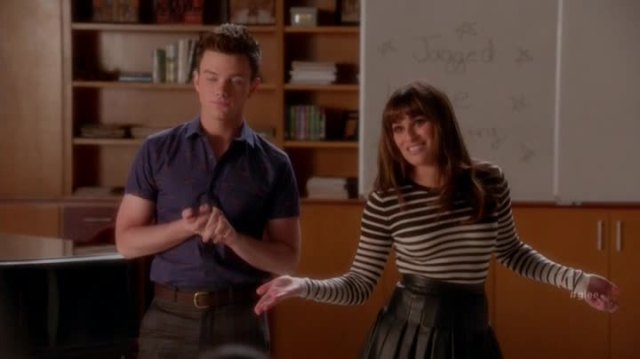 And that’s why, even though she is obviously a musical genius, we should not allow Alanis Morissette to be our role model when it comes to defining the word “ironic.”

The real majestic knights on a unicorns, however, are the Unholy Trinity’s faces on her heads, and they have returned this week in all their effusive glory to judge Kurt and Rachel so hard for their first attempt at teaching glee club together. What Kurt and Rachel try to explain is: Choose Tapestry or Jagged Little Pill and then perform a mash-up with someone who picked the other album. But what happens is: They talk over and around each other about Reese’s Pieces and sandwiches and how the true splendor of New Directions is that you get to play inside the full spectrum of musical history. The children look confused; they thought the true splendor of New Directions was about playing inside the full spectrum of queer sexuality. But okay. They also look confused because all the grown-up people from last week are still lounging around in their old high school choir room. 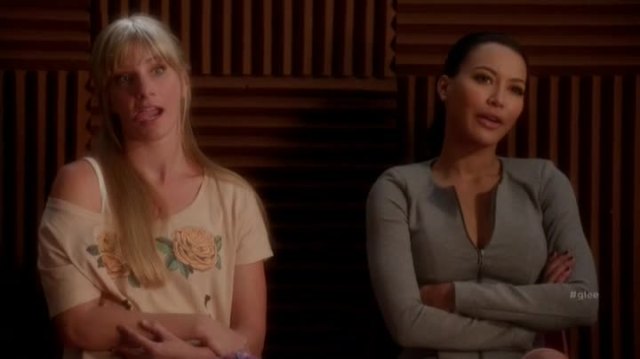 Keep calm and remember we’re still better than you.

Brittany explains it away by saying she can bend time and space with her mind, which: seems as valid as any other plotline on Glee.