In the world of soda, you’ve got your Straight Soft Drinks — your Dr. Peppers, your 7-Ups, your Coca-Colas. Then, you’ve got sodas that are a little more out there, your Kinky Pops. These include Mr. Pibb, Fanta and Cherry Coke. Then there are those of us who reject the sodanormative standards that society would like us to live by and drink Alternative Lifestyle Sodas. 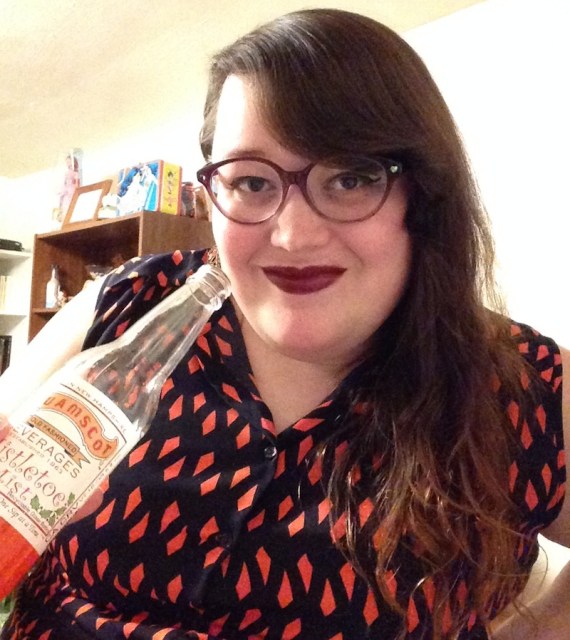 Here’s a ranking of fourteen of these sodas that I’ve had recently, from best to worst

This soda was dang good. I didn’t realize it was an egg cream when I first bought it, so I was delightfully surprised at it’s wonderful chocolate flavor and smooth creaminess. Now, there is milk and cream in this soda, so that might turn some people off, but I loved it. I’m definitely going to buy more of these the next time I see them. They talked about egg creams on that episode of The West Wing where President Bartlet asks that religious right radio host how much money he can sell his daughter into slavery for. 10/10 Toby Zieglers 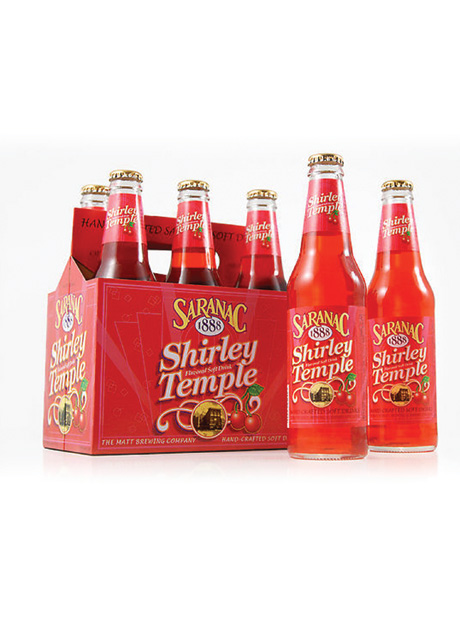 This soda reminded me of when I was a kid and my Grandpa would make Shirley Temples for my siblings and me at the bar he had in the family room of his house. Red flavored sodas are some of my favorites, and this was a really nice new addition to that roster. Lovers of Cherry Coke, Wild Cherry Pepsi, Mountain Dew Code Red and Big Red should definitely drink this instead. 9 and a half Bittersweet Memories/10

This was just plain excellent. It was super smooth, even to the point of being soothing. If a soda has too much carbonation, that can be a real turnoff, but this one had a terrific amount. Like, this pop would match up great with spicy food. Aside from being ridiculously smooth, it’s got a super great berry flavor —not too sweet, not to strong. Who knew that Carmen’s dog was so good at crafting creative and delicious sodas? 9 Carmen’s Dogs/10 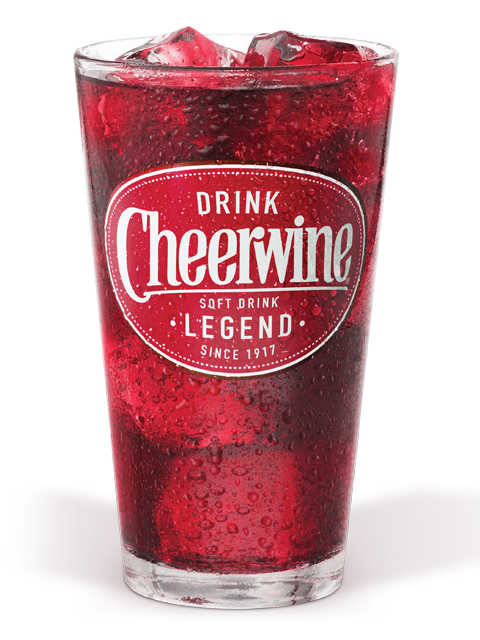 A nice cherry soda that uses real cane sugar. Of all the red sodas I’ve had, this is the darkest. If the soon-to-be-mentioned Squamescot Cherry Cola is regular Femme, Strawberry Fanta is Tomboy Femme and the previously mentioned Shirley Temple soda is Retro Femme, Cheerwine is definitely Hard Femme. 8 and a half Cherry Femmes/10 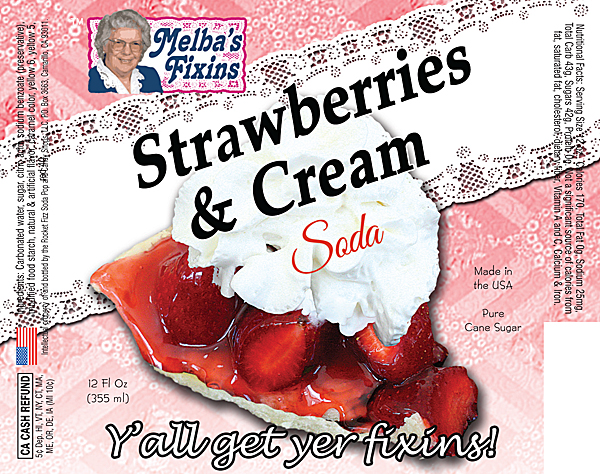 Like I said, red-flavored sodas are my favorite. This one was pretty similar to a lot strawberry sodas I’ve had (and loved) except it was more smooth and creamy (which, I mean, makes sense based on the name). It also was less sweet than most mainstream sodas, so that made for an easier drink. Melba’s Fixins is this brand of like, “Grandma Sodas” I think? They make a lot of pie and dessert flavored drinks. Good job, Melba, you sure know how to make a quality soda pop. 8 Sweet Old Grannies/10 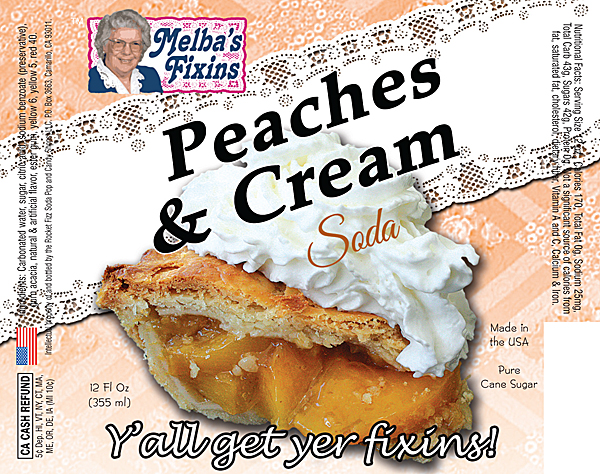 This was also pretty good and thematically similar to the Strawberry & Cream soda. Except with Peach flavor instead of Strawberry, so it was somewhat more mild. It reminded me of this Syfy Original Picture Anonymous Rex where dinosaurs didn’t go extinct, they just wear these “hard light hologram” suits, or sometimes just rubber suits, to look like humans (it makes absolutely no sense). Anyway, all the dinosaurs give off these unique dino pheromones, and the female lead smells like Peaches and Cream (well actually, hers are fake as she’s a human who was adopted by a dinosaur so she has to pretend to be one or the other dinos will kill her. Like I said, it makes no sense). I’m pretty sure this was my first peach soda ever, so that was pretty cool. 7 and a half Dinosaurs Disguised as Humans/10 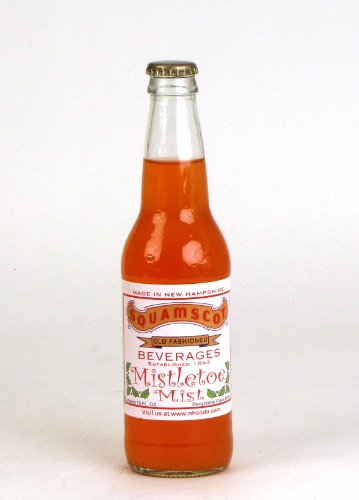 This was some sort of citrus drink, which let me down based on the name because it gave absolutely no clue as to what the flavor would be. It’s supposed to have “taste of spruce beer with a subtle fruity undertone” but it really tastes more like lemon-lime with maybe some tangerine mixed in? I mean, sure, I get an orange in my Christmas stocking just like any other girl, but this was no orange soda. Not Christmasy at all. I maybe would have enjoyed this more if it were marketed differently. This seems like a really good picnic soda. 7 Winter Picnics/10

Now, colas usually aren’t really my favorite, but as far as they go, this was pretty darn good. It definitely has a much more “cherry” flavor than most cherry colas that I’ve had before. Again, this soda, as many Indie Sodas do, uses pure cane sugar. Does that make it more healthy or more flavorful? I really don’t know. 6 and half Pure Cane Sugars/10 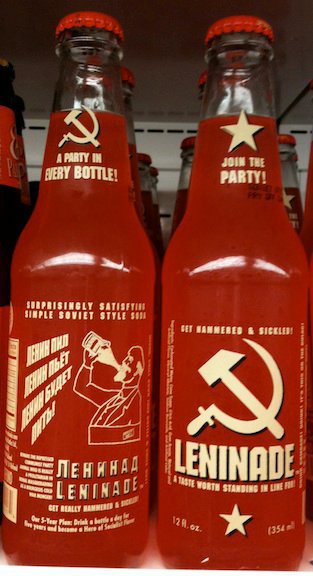 This tasted a lot like the Mistletoe Mist (and even had a very similar color, except redder, obviously) but as you can probably tell, it was marketed a billion miles differently. This bottle of soda is full of little jokes and slogans like “Get Hammered & Sickled!,” “A Taste Worth Standing In Line For!” and “Join the Party!”.  6 and a half Communist Manifestos/10

Don’t be fooled by this soda. I thought it would taste like blue, but apparently, it’s only colored blue. I was excited, I thought it would maybe be blue raspberry, maybe blueberry, maybe even bubblegum, but it was none of those. Just plain cream soda flavor. Like, I’m a pretty big fan of cream sodas, but this was an average cream soda with nothing special about it other than the color, and so it left me disappointed. Inside the cap it says “Stay away from crack, drink Jack Black.” It’s like a Snapple fact, but not a fact and not about Snapple. 6 Wastes of A Good Idea/10 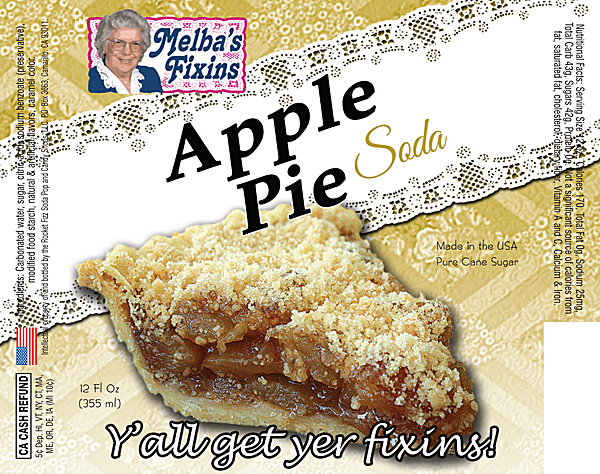 Now we come to section of sodas I didn’t like as much as I thought I would. Also, the third (but last) Melba’s Fixins soda. I do like some other apple sodas (like Apple Beer and Sidral Mundet), but this one had a base flavor in the back of it that made me not enjoy it as much. It was still alright though. 6 Not As Good As I Thought It’d Bes/10 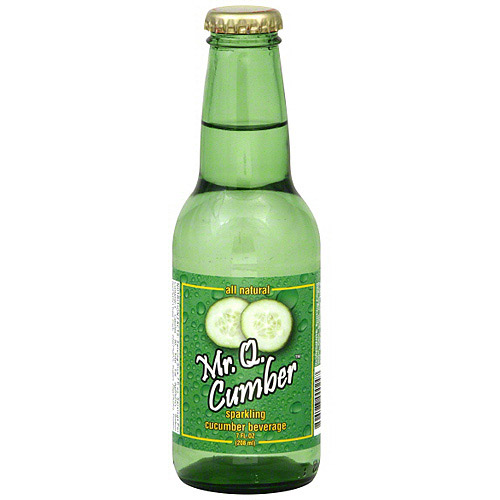 I bought this because I remembered the comedian Chris Gethard recomending it. Now, I’m a big fan of cucumbers (they’re one of my top ten favorite fruits) and I think this seems like a really hip soda, but this pop was not for me. Maybe the cucumber flavor was too strong or the mixture of the cucumber with the carbonation was too weird, but something just rubbed me the wrong way. However, I did have fun with this soda and, being the way I am, I could easily see myself buying this again to try to convince myself I like it. 4 I’d Drink This If I Wanted To Look Cools/10 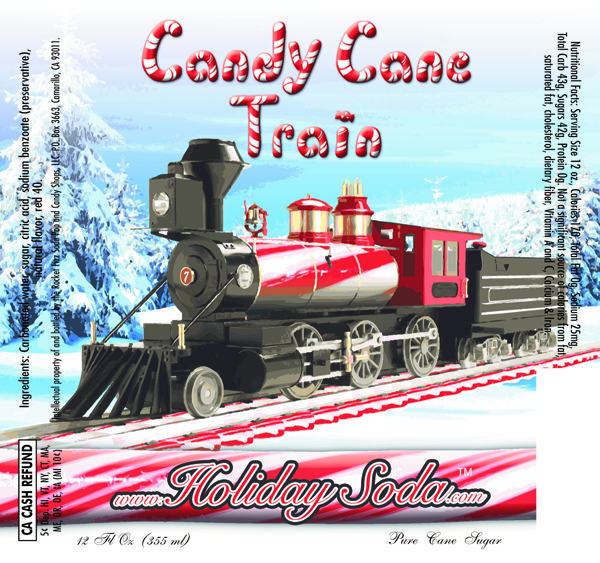 The first soda on the list that I truly did not like. This one kind of tasted like a candy cane, and kind of like Peppermint Schnapps but it was much, much sweeter and the carbonation made it go down much less smooth than even the alcoholic Schnapps. I love candy canes and I love Schnapps but I did not love this. I only drank a little before giving the rest to my brother and father. 3 I Should’ve Just Had Schnappses/10 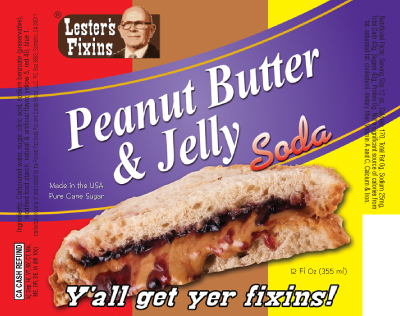 I’m pretty sure Lester’s Fixins is like, the “manly” counterpart to Melba’s Fixins, as they have flavors like Bacon, Coffee, Buffalo Wings and Ranch Dressing (oh no, no, no, no). Anyway, this soda, while it did pretty much have the flavor of Peanut Butter & Jelly, was horrible. Honestly, though, I don’t really know what I was expecting. I guess sandwiches just shouldn’t be made into sodas. I could barely drink two sips before I had to stop. I never want to drink this soda again. 0 Gross Disgusting Nasty Huge Mistakes/10