This category means a great deal to us here; we were nominated in 2013 and 2014, and finally won in 2015. When I saw the category was missing on the list of nominees, I figured they’d made a mistake and it’d be posted later in the day, joking in our post about the nominees that clearly following our win, the category had reached its pinnacle and could not continue. I was wrong! It wasn’t a mistake, it was entirely intentional.

In response to the elimination of the category, a group of independent bloggers banded together and wrote an Open Letter to GLAAD expressing their fury and disappointment. These bloggers represented publications including The Bilerico Project, Mombian, Pam’s House Blend, Back2Stonewall, The Seattle Lesbian and Unicorn Booty. (Autostraddle was not part of this group, although we would have participated if we’d known about it or been asked!) The letter also mentions something I wasn’t aware of, which is that the award’s existence was a direct response to “numerous complaints that the media watchdog favored large commercial enterprises over independent activist media.” I don’t think GLAAD would be financially viable or have the power it requires if it didn’t, to some degree, work with large commercial enterprises, mass media and big stars, and everybody we’ve worked with from GLAAD has been wonderful. But, that being said, there’s no reason why independent activist media can’t be celebrated along with the heavy-hitters. In fact, GLAAD could use a few more categories — like a Magazine Article category strictly pulled from LGBTQ media outlets, a Reporting award given to independent journalists, or a category for indie Web Series. Maybe “blog” isn’t the right word anymore — maybe “independent” is the real differentiator. The Back2Stonewall post refers to it as “Outstanding Blog/Independent Media,” which feels more accurate.

We talk about the importance of celebrating and funding independent media pretty much every day around here, and we’re lucky that so many of our readers listen, and respond by joining A+, buying merch, donating to the site and attending A-Camp. We make between zero and $50 a day from advertising, which isn’t much for a site that requires five full-time people doing six jobs each to survive, along with dozens of writers, illustrators, tech and design folks. We also talk about how much harder our jobs have become now that mainstream media has suddenly jumped on the LGBTQ bandwagon, launching their own thematic verticals complete with studio-produced television shows, daily video livecasts, celebrity interviews, interactive media, travel budgets, full tech teams and very well-compenstated editors and writers.

It’s unsurprising to see these outlets represented in the nominees for digital journalism and outstanding magazine article: Buzzfeed, Vice, The Huffington Post, The New York Times, Seventeen, New York Magazine. What pains indie media like us — and we have it better than most — is that the kinds of stories those outlets do are the kinds of stories we’ve always dreamt of doing ourselves, but can’t afford to. We have the ideas and the talent, but we don’t have the funding.

“Independent bloggers don’t have the resources and cash that large corporations have and we’ve led the charge on LGBT rights reporting in a way those sites can’t,” the open letter declares. “We’ve reported from the streets, from the halls of power, and scooped larger media conglomerates. We’ve raised hell and influenced the scope of national and state policies and politics. And we deserve better.”

I remember the first morning I woke up to a string of text messages telling me we’d been nominated for a GLAAD Award, back in 2013. I remember losing. I remember being nominated again, and losing again, and being nominated again… and finally winning! As the letter says, the award isn’t given out on stage. The winners for most of the writing/journalism awards are announced via a slide projected onto the large video screens on stage prior to the ceremony and during breaks. Nominees aren’t invited to the GLAAD Awards, but we’ve been able to get in on Press Passes most years, where we’ve happily sat in the very back with other independent journalists (we’re usually the only women). Last year, when our win flashed on the screen I yelled WE WON to my girlfriend Abby and then, tipsy and dressed fancy, sprinted across the auditorium to freak out with Alex, who of course hadn’t been paying attention when the slide went up. Everything suddenly felt real, you know? We’ve been working pretty tirelessly for nearly seven years — often for free, and still for very little money. We got our trophy in the mail a month or so after the ceremony, and we nurtured it. Also it kind of looks like a vulva, just saying: 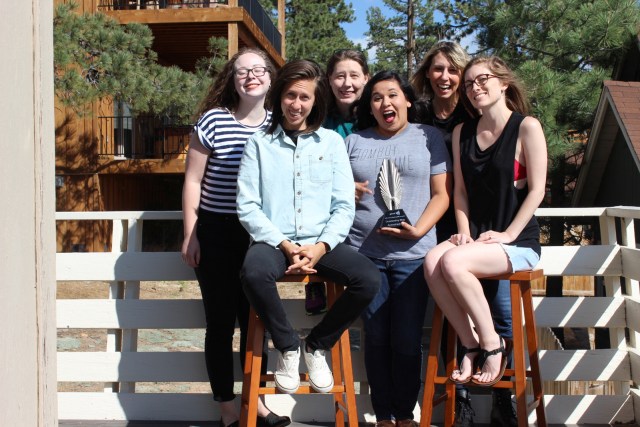 The senior staff hanging out with our GLAAD Award during the one week of the year we all work together in the same location!

Well, luckily we won’t be the last independent media makers to have the opportunity to win a GLAAD Award and take weird pictures with it. GLAAD heard the complaints, and responded to say that they will reinstate the award for the 2017 GLAAD Awards. Here is the letter they released in full, via:

It’s become abundantly clear that we were wrong to remove the Outstanding Blog category, and we apologize. Although we cannot make changes to this year’s slate of categories and nominees, the Outstanding Blog category will be reinstated in 2017 with improved selection criteria that ensures grassroots LGBT voices are given the recognition they’re due. And like in years past, there will be no submission fee required in the category.

The contributions of LGBT bloggers and independent media have been critical to the advancement of this movement and, indeed, GLAAD’s mission. Eliminating the Outstanding Blog category was an affront to the tireless efforts of those whose work has been essential to putting a spotlight on the issues LGBT people face, and which too often goes overlooked. Removing the category was wrong, and we are committed to doing better.

See! Look at that! Independent media just proved its own point.