L’shanah tovah, queermos! Happy new year! We’ve officially entered year 5774 on the Jewish calendar, and this year is already looking super sweet. How do I know? Well I’m really just guessing, but if this delicious honey cake I made yesterday is any indication, I’m totally right.

FYI for the non-Jewish Straddlers out there, we’re currently in the midst of Rosh Hashanah, which is the Jewish holiday celebrating the new year. It literally means “head of the year,” and it is observed on the first two days of the month of Tishrei, which marks the anniversary of the creation of Adam and Eve. Because the Hebrew calendar is different from the Gregorian calendar, the holiday doesn’t fall on the exact same date every year, but it usually comes around at the beginning of September which I’ve always appreciated because I sort of feel as though this time of year is very emblematic of fresh starts and new beginnings, what with summer winding down and the leaves turning beautiful colors and then falling off the trees and students buying new notebooks and all that jazz, you know?

Anyway, along with apples and honey and round challahs, which are some major traditional foods eaten on this particular holiday, it is also customary to eat honey cake. We traditionally eat sweet things on Rosh Hashanah to symbolize a sweet year ahead, and round foods are also encouraged to symbolize the continuity of life and creation. Honestly I am not the best practicing Jew – I avoid going to synagogue and I forget some of the biblical stories I learned during my many years at Jewish Day School – but I embrace the cultural traditions of Judaism wholeheartedly and I love being Jewish, and as we all know I’ll support anything that allows me to flex my baking muscles in the kitchen.

So here is a delicious honey cake that is totally delicious and sort of tastes like a solid version of the best chai tea you’ve ever had. It is really well-received on Rosh Hashanah, but I’m confident that it is also appropriate for people of all religions to make any day of the year. So whoever you are and whatever god(s) you do (or don’t!) believe in… enjoy. 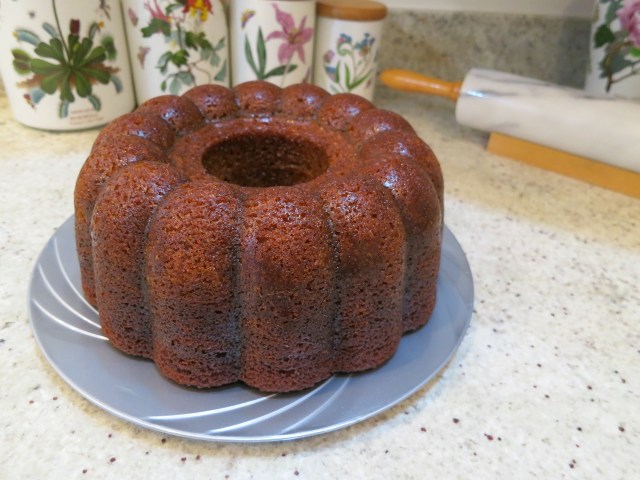 recipe from Kinnereth Cookbook, Second Edition via my mom 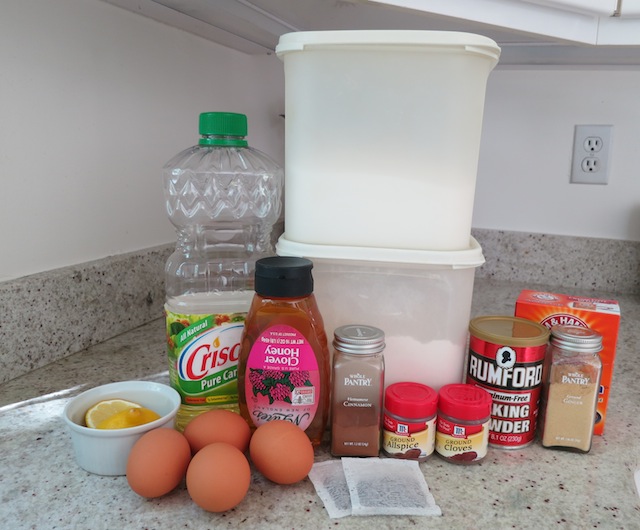 one of the cool thing about living at home is that flour and sugar live in these crazy containers, not in gross old ziplock bags

1. You’re going to want to brew your tea at the very beginning of this process. Honestly, do it before you even turn on the oven. The original recipe puts the “baking soda dissolved in strong cold tea” situation at the very end of the ingredient list and doesn’t mention it until the end of the directions when you’re supposed to mix it into the batter, but like, how are you supposed to have a cup of strong, cold tea just randomly on hand in a matter of seconds? You need to boil the kettle, pour the hot water over a teabag, let it steep for a long time so the tea can be strong, and then let it cool for a long time so the tea can be cold. Let me repeat: HOW ARE YOU SUPPOSED TO MAGICALLY BE ABLE TO DO THAT IN A MATTER OF SECONDS?! I dunno, maybe my ancestors knew something about brewing cold strong tea that I do not know, but all I can tell you is that I got to the end of this recipe and then had to wait approximately 20 minutes for my tea to reach a strength and temperature of my liking, and sure, I got some important work done in that time (read: stared at photos of Raven and AzMarie and coveted those amazing floral print overalls) but maybe you’d like to be more efficient than I am. So just trust me. Brew some tea. I used English Breakfast – I’d recommend a traditional black tea without any additional flavor (save your Almond Cookie Tea for a tea party). Then forget about it. We’ll get back to it at the end. Moving on!

2. Now you can turn on your oven! The recipe says preheat the oven to 325 degrees but my mom told me to up the temperature to 350 degrees so I did. Mom knows best.

3. Grease your pan. So, okay. Let’s talk about this. The recipe suggests a tube pan, but my mom uses a bundt pan and I think the scalloped detail is part of what makes this cake so gorgeous. Anyway, my mom warned me that if I didn’t grease the pan very well, the cake would get stuck in it and I would be responsible for ruining Rosh Hashanah for everyone. So I used a lot of butter and I probably over greased the pan, but it’s fine. The cake didn’t get stuck and I didn’t ruin the new year so all is well. I think the major take away from this is that in this instance, more is more. Maybe more is always more. Let’s ponder that in the new year. 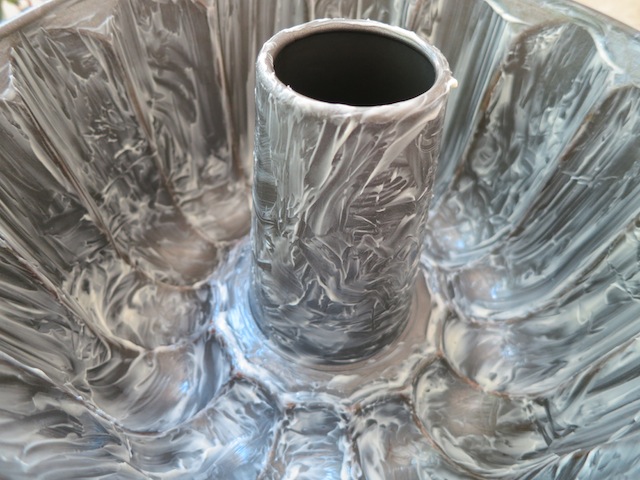 4. Put the eggs, sugar, oil, and honey in a large bowl and mix them together. The neat thing about living at home with my parents is that unlike many times before when I’ve said “you should use a whisk but I don’t have a whisk so I used a fork and it was fine,” this time I wanted to use a whisk and I totally could! Because my parents own not one, but two whisks. I may be a 24 year old living with my parents in the suburbs, but in that moment, I swear I was infinite. Or at least really weirdly ecstatic to be using a whisk. Anyway.

5. In another large bowl, mix the flour, baking powder, cinnamon, allspice, cloves, and ginger. If you have another whisk, now is the time to use it. 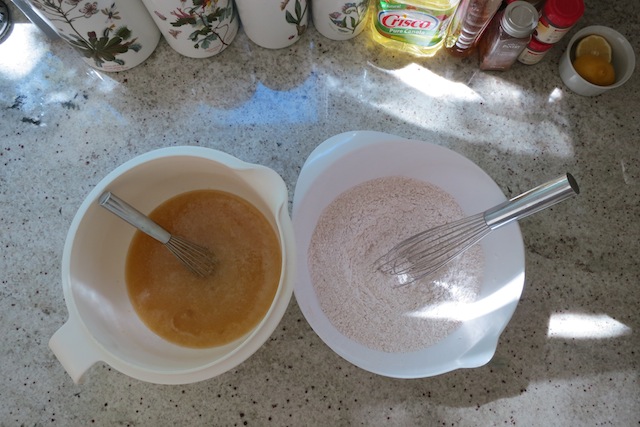 6. Now is the time we go back to our cup of tea! Is it cold? Mazel tov, your life is easier than mine on the day I made this cake. Take your cold, strong tea and pour it into a measuring cup to make sure you’ve got the right amount of tea. Then take your teaspoon of baking soda and put it into the measuring cup filled with tea, stirring it around so it dissolves. Apparently you’re supposed to hear some bubbling, but I didn’t. It’s fine. This is the weirdest step of any recipe I’ve ever followed. I dunno. 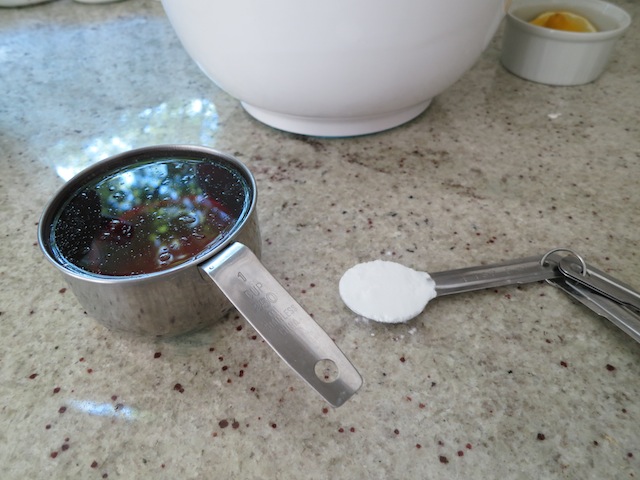 notice how i captured the reflection of the trees outside my kitchen window in this cup of tea? that’s right, suburbia can be poetic.

7. Add the dry ingredients and the baking-soda-filled-strong-cold-tea and the juice of half a lemon to the egg mixture. The recipe suggests adding them alternatively and beginning and ending with the dry, but I just dumped it all in and mixed really well and it was great. I would suggest juicing the lemon into a bowl first as opposed to just juicing it directly into the batter, because you don’t want to be fishing lemon seeds out of a huge bowl of batter. Also, this is a pretty wet batter, so don’t be alarmed if it’s really runny. It’s supposed to be. 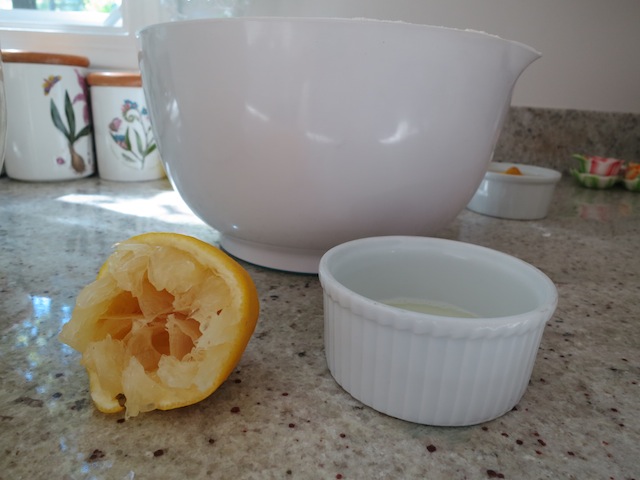 don’t forget the lemon juice, i almost did and according to my mom that would have been a major problem

8. Pour the cake batter into your well greased pan. 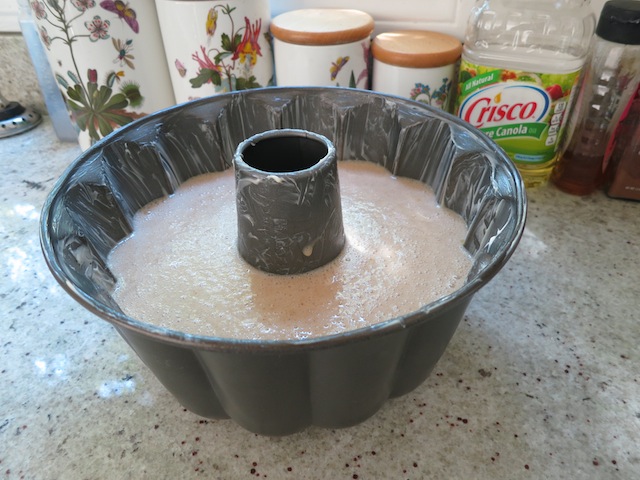 the batter is not going to fill the entire pan but that’s okay because it’s going to rise and be beautiful, fear not

9. So. Okay. The recipe suggests baking for 1 hour and 15 minutes (at 325 degrees, remember?). My parents’ oven is super hot, so I baked our cake for only 40 minutes at 350 degrees, per my mom’s instructions. I don’t really know what this means for you because I don’t know your oven and I don’t know your life. I think my suggestion is to say follow the baking times and temperatures the recipe suggests the first time you make this cake, and then adjust it from there. It’s a really moist cake, so if it tastes dry, you’ve probably baked it for too long. You can also plan to bake it for the full hour and 15 minutes and check in on it frequently. There are a lot of options, as with most things in life. Let’s embrace spontaneity in the new year.

10. Serve this cake and have a sweet new year! Or if you’re me, immediately make two more because your family is hosting 40 people for Yom Kippur Break Fast next week and you’re doing a lot of cooking in advance and living with your parents in suburbia is turning you into a queer grrrl Martha Stewart 50’s housewife domestic goddess and you’re not even mad about it. 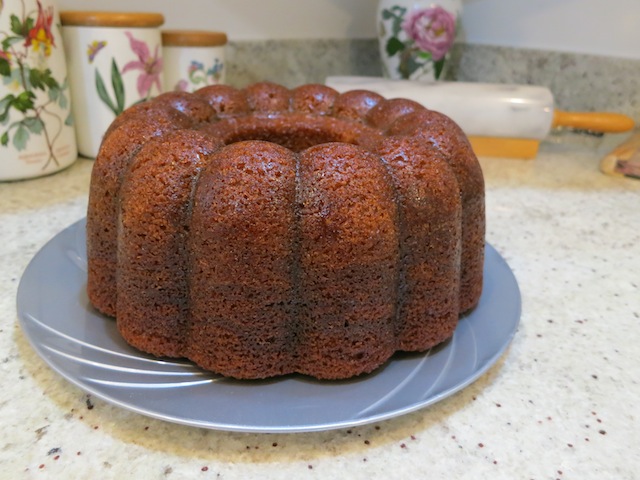