Welcome to easily the weirdest premise for a Get Baked I have ever written.

The time has come to discuss one of the most confusing and ridiculous storylines of everybody’s favourite show that used to be on the television, The L Word.  Remember way back in Season 2, when Ilene Chaiken was ostensibly still trying to make Kit Porter’s character make any sort of sense and thus bequeathed to her the West Hollywood cafe known as The Planet?  Kit wasn’t sure how to run a business so she went to a program called TOE – the Theory Of Everything – to see a motivational speaker named Benjamin Bradshaw.  Bradshaw asked Kit what kind of animal she saw herself as, she told him she identified as an alley cat, and just like that, one of the most unnecessary/uncomfortable TV romances probably ever was born.  Like, what the hell are you doing, Kit?  You’re Pam goddamn Grier. 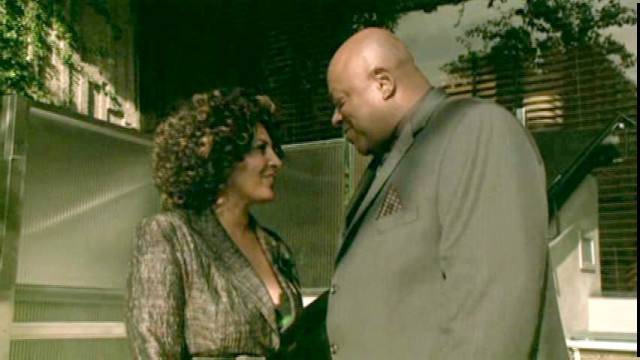 seriously why is this happening?

Benjamin was married and had a family, but that hardly mattered.  Their relationship progressed quickly, and Benjamin helped teach Kit how to turn the coffeeshop she’d inherited into her dream business: a cosy cafe by day, and a popular club by night.  He somehow achieved this by teaching Kit basic economics, like lowering costs and raising prices on in-demand items.  For example, when Kit explained that the Planet’s most popular item was the pear polenta tart, Benjamin instructed her to drastically raise the price.  When Kit argued that her customers would be upset, Benjamin told her to just inform them over and over again: “it’s worth it.”  This advice seems like it would be terrible, but what the hell do I know?  I’m not a motivational speaker, nor do I run a successful restaurant.  I’m just a girl in the world who saw this scene and thought a pear polenta tart sounded pretty delicious, actually.

So here we are, celebrating the most sought-after dish at a fictional cafe that none of us have ever visited.  You’re perfectly welcome to eat it alone in your living room while imagining that you’re out in West Hollywood with Alice, Dana and the girls, laughing it up about Shane’s latest conquest,  wondering what the hell is up with Jenny.

LADY WITH THE FLASHING EYES, HERE ARE THE INGREDIENTS YOU WILL NEED:

1. Preheat your oven to 350 degrees.  In a large mixing bowl, mix your margarine and sugar and blend thoroughly.  Add your egg (or egg replacer), polenta and salt and mix until smooth.  Gradually mix in the flour.

2. On a lightly floured work surface, knead your dough until it’s… doughy.  With the polenta it’ll actually be a little grainy, but once it seems like a cohesive dough situation, wrap that sucker in foil and throw it in the fridge for 20 minutes.

3. Take out your dough and press it into a greased 9″ pie or tart pan (I actually HAVE a tart pan that I wanted to use for pictures but I USED IT FOR A PIE).  Because this is a tart and not really a pie, you don’t have to push the crust up over the edges like I did, but here we are.  Toss your crust into the oven for about 7 minutes, then remove it from the heat and let it cool while you deal with the fruit topping.

4. Cut up a bunch of pears!  The recipe says 2 or 3 but I used like 4.  Melt the 3 tbsp of margarine in a skillet and then sautee the pear slices, removing them from the heat just when they begin to brown slightly.  Place them in concentric circles across the top of your polenta crust, or in some other pretty arrangement that suits your fancy.

5.  Bake at 325 degrees Fahrenheit for about 35 minutes, or until the pears are just starting to get tender and the crust is slightly darkened.  Let it cool, garnish, slice into wedges, bring it to Tina’s house and leave it on her front steps with a note that says “YOU HOLD ALL THE CARDS.” 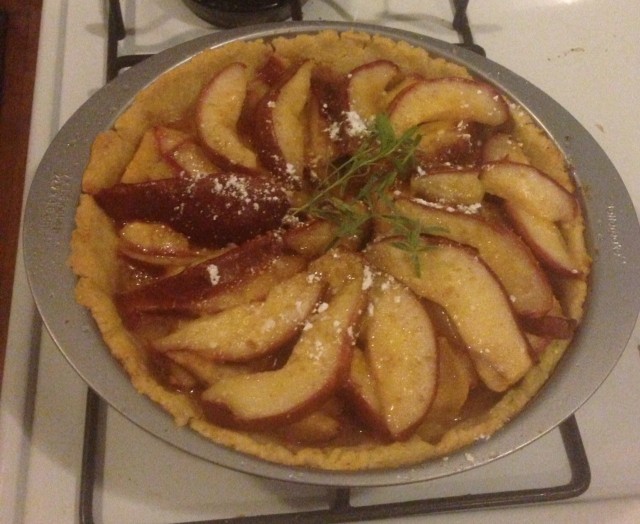 Stef has written 448 articles for us.