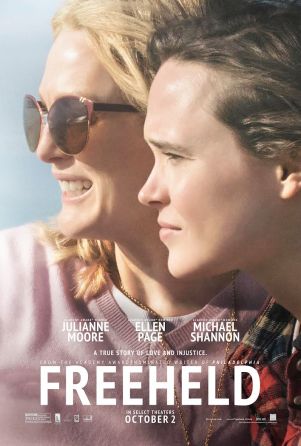 Honestly, I almost cried after Stacie and Laurel’s first conversation — in the parking lot, after volleyball, when Stacie’s friend teases her into summoning the guts to ask a pretty woman for her number — just thinking about how eventually Laurel was going to die. Laurel was going to DIE and Stacie wasn’t gonna get her pension! Look at them, innocently folling in love, unaware that DEATH LURKS around the corner! In between the moment they first met and the end of the movie, there were infinite opportunities to cry. The last half-hour is definitely peak crying time, only a superhuman could make it through the last half-hour without getting a little teary-eyed. If you’re interested in weeping for about two hours, I cannot recommend a better dark room in which to do so than a movie theater screening Freeheld.

Also, if you’re interested in watching a really solid film with a lesbian couple smack dab at the center of a small story with national implications, I cannot recommend a better place to do so than in a movie theater screening Freeheld. It’s not without lightness, either, or humor in fists, humor at the moments when you most need it (because you were just crying). It’s a real rollercoaster, y’all.

Freeheld tells the bittersweet true tale of accomplished New Jersey detective Laurel Hester (Julienne Moore) and her eventual domestic partner, auto mechanic Stacie Andree (Ellen Page). Despite their nearly 20-year age gap, they fall in love, buy a house, get a dog, and plan to spend their lives together. Laurel is driven, professional and very closeted at work, even to her police partner, Dane Wells (Michael Shannon), and Stacie tries to lovingly nudge her out of the closet. Then everything falls apart: Laurel is diagnosed with lung cancer and a handed a very slim chance of survival. Her petition to give her pension to Stacie is denied by the conservative Ocean City Board of Freehelders, and that’s when the fight at the center of the movie begins. Steve Carrell plays Garden State Equality activist Steven Goldstein, a character who may seem over-the-top to the uninitiated but honestly, everything about him rang true to me. I’ve known many Steven Goldsteins! When he first shows up in the movie it’s a bit jarring — he’s a comedic actor in a drama, after all — but eventually you come to rely on him for the very same reason he felt jarring: he’s a comedic actor in a drama.

There are neatly defined villains and relatively predictable arcs for the bad-guys-turned good guys, sure, yes, absolutely. But as a member of a population so egregiously underrepresented in popular film — lesbians — none of that really matters to me. Sure, the film deals in tropes from time to time, but usually those tropes aren’t employed in stories about us, because so few stories about us are ever told. Prior to this movie we’ve had very limited exposure to “true stories” about our history in major motion pictures, unless you count the story of Aileen Wournos. Yes, there are lots of lesbian movies out there and we recently found over 100 worth watching, but if you want to talk about big-studio personal stories (fictional or real) with political implications and historical relevance in mainstream cinema, we have Milk, Philadelphia, Angels in America, Pride, Boys Don’t Cry, and the recent exercise in audaciously white-washed and horrible filmmaking, Stonewall. But it’s hard to find a story with lesbians at the center. Here, now: this.

At a personal level, a lot about the couple’s dynamic, personalities and background were jarringly familiar in how it resembled my own relationship. The age gap, first of all. The fact that my fiancé looks like a composite combination of Stacie and fictional Stacie. The working-class short tomboy with a truck who fixes things and knows how to garden and dates the middle-class tall blonde unflinchingly committed to her all-consuming career? Familiar. Even how Ellen Page talked sometimes was so familiar it gave me goosebumps. Not just the broad strokes, either, but little details here and there, ones I won’t get into because I’m not gonna tell you the whole movie and you probably don’t care. But it was … bizarre. It was so, so bizarre. Something I never thought I’d witness, not in a movie theater. Did I mention that everybody in the movie theater was weeping? We wept. We WEPT.

This is a good movie and we don’t get a whole lot of those about our lives, with actors as committed and fantastic as Page and Moore are in this film. (Moore actually frequently plays queer women characters, including roles in The Kids Are All Right, The Hours and Chloe.) The film has been criticized for dwelling too long on the story of Dane Wells, making the queer story “about straight people,” but no, not really, only insofar as progress was impossible to make back then without the support of straight allies. Nobody handed out cookies, there was no inspirational orchestral music when Dane summoned the spirit to stand up for his beloved co-worker — and we didn’t see Dane’s family, his home, any part of his life that wasn’t also part of Laurel’s. This was Laurel and Stacie’s film, from beginning to tearful end.

Roland Emmerich has made a bunch of noise regarding his conviction that Stonewall, which was trashed by reviewers and bombed at the box office, needed a “straight-acting” fictional gay man at its center in order to connect with straight viewers. This is a ridiculous concept to begin with, considering how adept humans are at connecting with, say, movies about talking horses or aliens. But sure, any ultra-niche story could deter audience members from outside that niche, particularly if it’s not very good to begin with. I don’t think it’s fair to extend the criticism leveled at Stonewall and The Danish Girl to Freeheld, though. It told an entire story, and straight people were involved in the story — and not that involved, honestly, I don’t think Laurel’s sister had more than two lines. But we don’t live in a queer vacuum. I mean, personally, I live in a queer vacuum, I’m practically a separatist, but Stacie and Laurel didn’t, and the balance was handled with relative delicacy, in a manner that honored the experience in all its complexities. (Or maybe it’s just that those few police department scenes were a welcome reprieve from all the weeping at the hospital.)

We’ve got a long ways to go when it comes to lesbian representation in mainstream film — Freeheld is white as snow, behind and in front of the camera, of course, and was written and directed by men, like 93% of films are these days. There are so many more diverse stories to tell that I hope women get the opportunity to tell. But go see this. Go see Grandma, too, and go see this. Bring Kleenex or wear a dark hoodie and maybe don’t go with somebody you’re trying to impress (maybe take someone you’re trying to impress to Grandma, because that only made me cry three times and my makeup pretty much stayed put), but go. Ellen Page looks really cute in a denim vest, and her volleyball team is called the Spike Dykes, and it was being in this movie that made her realize it was time to come out, thus forever changing “Valentine’s Day” into “Ellen Page Day.” It’s beautiful and it will break your heart right open.