With the number of queer female TV characters increasing at an astronomical rate these days, it’s easy to forget how terrible things are on the big screen. Yesterday GLAAD released its third annual Studio Responsibility Index, which tracks LGBT representation in films made by Hollywood’s major studios, and whooo boy, it is bleak. Let’s discuss what GLAAD’s report reveals, look at some pretty charts I made, and talk about why movies still matter.

If you’re into it, you should really read GLAAD’s full report. These things are always comprehensive, statistical masterworks. I read the whole thing three times, though, and I’m going to shake it down to the bottom line so you can see how grim it is. Here we go:

+ Of the 20 films that included queer characters, only seven included women. 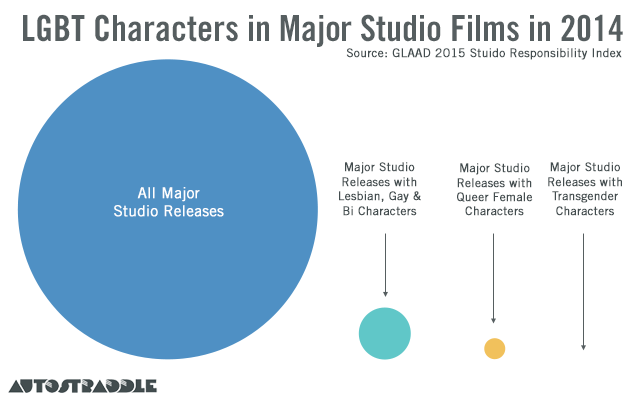 + The film contains a character that is identifiably lesbian, gay, bisexual, and/or transgender.

+ That character must not be solely or predominantly defined by their sexual orientation or gender identity. I.E. they are made up of the same sort of unique character traits commonly used to differentiate straight characters from one another.

+ The LGBT character must be tied into the plot in such a way that their removal would have a significant effect. Meaning they are not there to simply provide colorful commentary, paint urban authenticity, or (perhaps most commonly) set up a punchline. The character should “matter.” 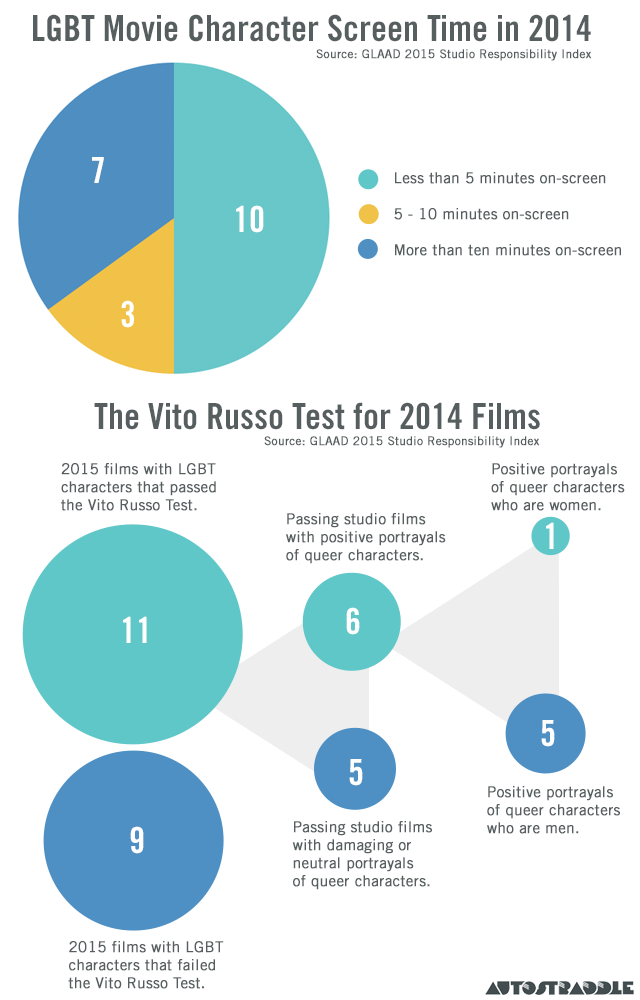 How Tumblr Does It

The 2015 Studio Responsibility Index numbers are depressing, for sure, but so is the depth GLAAD had to dig to even find some of the gay characters in the report.

+ In Mas Negro Que La Noche, the character called Pilar is probably a lesbian “based on several longing looks” she gives another woman and because someone remarks on her “very ‘lesbian’ tattoo.”

+ In The Lego Movie, the one-second appearance of Dumbledore counts as gay, right? Because Dumbledore is gay. Right?

+ A minor character in How to Train Your Dragon 2 says, “This is why I never married. That, and one other reason.” So we should infer that “the other reason” is that he’s gay.

+ In Wes Anderson’s Grand Budapest Hotel, some of Gustave’s prison friends call him a “real straight fellow,” to which he responds: “Well I’ve never been accused of that before, but I appreciate the sentiment.”

+ In Night at the Museum: Secret of the Tomb, “Twice, Octavius is also shown to be quite taken with the appearance of the knight Sir Lancelot, remarking about how handsome he is and his ‘huge sword and hypnotic blue eyes.'”

I’m not clowning on GLAAD. This report is important stuff. It’s just that there were so few legitimately queer characters on the big screen for any length of time in 2014, GLAAD was forced to sift right to the bottom of the barrel to squeeze any sign of gayness out of some the characters they evaluated. It’s like if you tilt your head just right and stare long enough at a Tumblr GIF set, you can come away thinking nearly anyone is gay.

GLAAD opens its Studio Responsibility Index by reminding everyone that what happens on the Hollywood big screen still matters quite a lot. Sure, queer women can save a buck and watch hundreds of queer characters on their TVs from the comfort of their homes. And honestly, that’s what many of us do. Our representation on TV is incomparably better than what’s at the theater. No contest. However, Americans still spend billions of dollars every year consuming major blockbusters, and what they see on the big screen effects their perception of gay people. GLAAD has proven that fact over and over. Plus, Hollywood blockbusters are one of the United States’ main exports, and the way that most other cultures are exposed to our own. Damaging tropes and stereotypes reverberate around the globe when they are unleashed in movies produced by major studios.

Sadly, Hollywood continues to drag its feet and trail decades behind the pace of the rest of American entertainment. In February, Variety reported that even though female-fronted films like The Hunger Games, Maleficent, Divergent and Tammy had huge box office success last year, women “comprised a paltry 12% of protagonists in the top-grossing films of 2014. Over the past decade, the situation has gotten worse, not better. The latest figures represent a drop of three percentage points from 2013 and a fall of four percentage points from 2002.”

NPR’s Linda Holmes did some fascinating number crunching two summers ago about the movie theaters within ten miles of her home and concluded that on any given Friday:

Of those 617 showings, 561 of them — 90 percent — are stories about men or groups of men, where women play supporting roles or fill out ensembles primarily focused on men … Of the seven movies about women or balanced groups, only one — the Israeli film Fill The Void — is directed by a woman, Rama Burshtein. That’s also the only one that isn’t about a well-off white American … If I were limited to multiplexes, as people are in many parts of the country, the numbers would be worse. In many places, the number [of movies with female leads] would be zero.

If Hollywood still isn’t willing to put up the money to produce movies with female protagonists — despite the repeated, billion dollar successes of those films, and the fact that women comprise 50 percent of the population — how much less willing are they going to be to champion films with significant queer characters?

For now, Hollywood blockbusters are a straight white man’s game, and there’s no end to that paradigm in sight.