I’ve found myself anesthetizing myself with computer games lately. When I read the news, I often find panic rising in my throat. Gay people persecuted in Chechnya, hiding in Russia, and being denied visas by the United States — a country that is, I think, barely a democracy anymore. I look at coverage of the conflict in Syria as it rages on. Hell, even the small personal things, like me moving out of a neighborhood and building that I LOVE — it all serves to make the alarm bells ring. This world, our reality, is currently a big ole dumpster fire. And while it’s sometimes technology’s job to make the world a better place, it’s also sometimes technology’s job to provide us with some good, old-fashioned escapism.

These games were low or no-cost investments for me that have yielded hours of forgetting exactly how bad things are right now. These are, by no means, relaxing games (if you want those, we got those too). Rather, these are games a) in which the world is quirky enough to distract you for a hot sec and b) that don’t cost a ton to start playing. Other than that? Well… they are very, very different from each other.

Creativerse officially launched on May 8th and I’ve been having a gosh darn BLAST pretending that my biggest struggle right now is building a reinterpretation of The Burrow from Harry Potter in my own, personal world. I’ve been describing this to people as Minecraft but prettier and more accessible, given that it’s free to play. When you first drop into the world, you’re given only the instructions to build shelter before nightfall (which I highly recommend that you do, yes, do that). Using your mining cell and a wooden stick, you can build and craft your way into safety, and then build and craft your way into much more sophisticated way of life that includes things like walls made of purple goo and machines and swords made of obsidian. Given that this is a game that features combat? I die A LOT. Like a lot a lot. I’m in the middle of building a shrine in a frozen desert to my own deaths. But! If that doesn’t sound at all appealing to you, the good news is that every player can play in a world by their own self if you don’t care to engage in multiplayer environments—and in that world, you can make your monsters peaceful, gravity low and fire non-spreadable, among other things. Or, if you’d like to interact with others, join adventures or other worlds.

There’s really only one thing about Creativerse that frustrates me (aside from how bad I am at combat), and that’s the gender stuff in the character creation screen. There’s only two genders and skirts are compulsory for the lady-option. BUT! I emailed the Playful, and they assured me that it’s on their radar — it just might take a while, with a team of only nine running a live game. I’m willing to give smaller companies a bit of slack on this one, as long as it’s on the list (and they haven’t done it on purpose, which they haven’t!), so give your be-skirted women bright green mohawks and play as cute cyberpunks while they sort it, and other bugs, out.

Creativerse is free to play, and if you want to join up with other Straddlers to play it, let’s talk it out in the comments below. Creativerse also has a pro option, which is a one-time fee of $20, and which I paid almost IMMEDIATELY because I was like YES, DEVELOPERS, TAKE MY MONEY. But 99% of features are available without paying, making this relatively financially accessible. Grab it up on Steam for Mac and Windows.

A House of Many Doors

Full disclosure, I have not gotten very far in A House of Many Doors because, as bad as I am at combat in Creativerse, I am AS BAD at piloting the centipede-esque underground transportation machines in this world. I get boarded by combative parties and I die a lot. BUT. There are a few reasons I am featuring it here even though I am so so so so terrible at it. First, this game features a weird, quirky world all right: the House, a parasitic dimension that steals from other worlds. The game opens with your head bandaged, bandits having just stolen a memory from you. MEMORY? STOLEN? Gosh, what an idea. What an imaginative idea. Second, this project was incubated by Failbetter Games, who I love and who I’ve covered a bunch. They reached out to me about A House of Many Doors to say that gender, just like in Fallen London or Sunless Sea, is fluid here and doesn’t matter. You can choose any portrait, many of which eschew traditional thinking about gender, and because the game is written in second person, I haven’t yet encountered any gendered language. So you’re free to play whoever without any weird, limiting language. No small feat, given that the game relies heavily on language. That’s the third reason I’m featuring it here—I can’t find the walls of the writing. The story is massive and I’ve barely scratched the surface of it. Want to immerse yourself in a world unlike ours and uncover a story that feels like solving a mystery that keeps twisting out of your hands? Yes, this is that game.

A House of Many Doors feels a lot like Sunless Sea, which isn’t bad, just something to know. If you enjoy Sunless Sea, you’re probably going to love this. And if you can Captain a ship on the Unterzee, then probably you can Captain a kinetopede better than I can. At $13, this is the most expensive escapism on this list. You can pick it up on Steam for Mac and Windows. I will leave you with this warning on their Steam page: 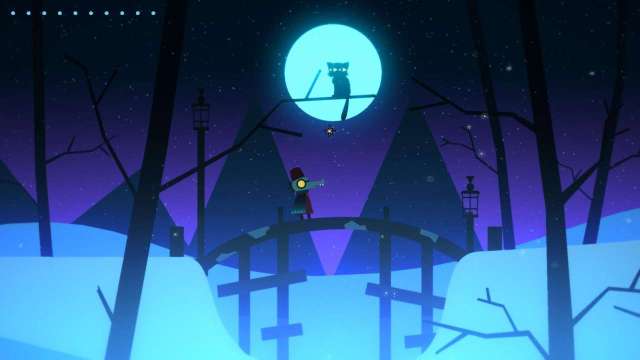 Our very own Dufrau has reviewed Night in the Woods right here, but did you know that the developers put out a couple of auxiliary games to allay impatience while waiting for the game? One of them is Lost Constellation, and it fits the bill for a quirky, idiosyncratic world that will DEFO make you forget about this one for a hot sec. This is a playable fable with a winter theme for those of you missing weather that isn’t 92 degrees — you play as Adina, a crocodile, heading into the woods and… well, I actually don’t want to spoil this for you. The game relies pretty heavily on story, as it is a playable fable, and I don’t want to fuck up the discovery experience for you. Like Night in the Woods, the art is gorgeous. Even though this is an auxiliary game, it really stands on its own AND the magic of it is refreshing. Lost Constellation is pay-what-you-will on itch.io.

I said weird worlds, right? Welp. The tagline for Eggggg is “The Platform Puker.” Our wee little protagonist, Gilbert, has a severe egg allergy. Too bad the world is literally made of eggs and cyborg chickens. The game requires only two touches on your iOS or Android device — right and left. The puke, spewing forth from Gilbert’s mouth as if from a garden hose, helps you jump up walls and parkour your way through this weird, Adventure-time esque world. This sure is… something. This is probably the weirdest escape-world I’ve got in here. Do yourself and play with the sound on — some shit makes weird noises that had me laughing.  Egg is free for iOS this week, costs $2.99 on Android and is coming soon to Steam. The vomming is especially cathartic since every time I read the news that’s what my body wants to do.

Which weird worlds are y’all escaping to? Let’s chat in the comments below.