During Artist Attack! month I wrote about the amazing South African photographer Zanele Muholi who uses her work as “visual activism.” On April 26th, Muholi arrived home to her apartment in Cape Town to learn that more than 20 hard drives with backup of her work from the years 2008-2012 had been stolen by a thief out her bathroom window on April 20th.  According to her partner, Liesl Theron, the rest of her possessions were left untouched furthering the likelihood that this was a targeted attack.

The robbery has seen little press coverage, which has lead to further outrage as many believe the media blackout is due to the nature of Muholi’s work documenting queer South Africans and homosexuals in other African countries. Some of the only coverage I’ve seen of the story is by Melanie Nathan, a blogger and activist pictured at right with Muholi.

Muholi has created an IndieGoGo campaign in response:

I feel like a breathing zombie right now.
I don’t even know where to start. I’m wasted.
I’ve sent out a note to friends to tell them about the incident.

I am hoping that a few of my good friends are willing to go to pawn shops or to other places where this type of equipment is sold. I do not even want to know who the thief is.

I need the hard drives: ranging from toshiba, Western, Samsung at 320GB – 1TB each–these are the brands and sizes of hard drive I am looking for.
They would have gone into the pawn shop since 20 April. I am willing to pay a reward for the return of those ext. hard drives.
I certainly would pay more than the pawn shop can sell them for.

Thanking you in advance.

Nathan is asking anyone interested in establishing a reward fund for the returned goods to contact her (nathan@privatecourts.com) directly. 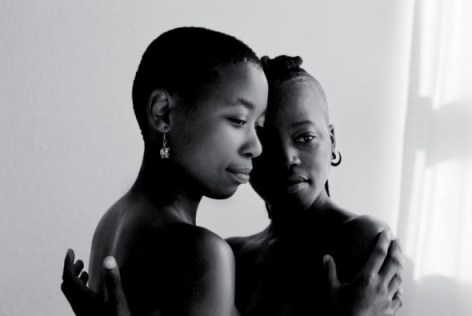 The IndieGoGo campaign has raised about $3,000 so far to replace Muholi’s stolen equipment, but obviously the years worth of original photography and video footage documenting queer black history in places such as South Africa, Zimbabwe, and Uganda is irreplaceable. The stolen work included photos taken at the funerals of lesbians killed in hate crimes, as well as works in progress and work that Muholi had planned to exhibit in July. The show will now have to be canceled. The loss of these often unrepresented voices whom Muholi has worked so hard to document and share with the world is disturbing enough, but the fact that few mainstream media outlets have deemed the story unworthy of covering means that even the loss of these women’s stories is going without notice.

Will any of the larger arts, human rights or media organizations step forward to provide coverage of this story? If there is any chance of recovering her work, time is of the essence. Considering the plethora of media sound bites promoting gay rights as the new human rights frontier in America following Obama’s pronouncement last week in support of gay marriage, it would be heartening if Muholi’s story was considered worth telling.