If you’ve been reading about Sarah McBride elsewhere on the Internet, you may already have realized that when she came out, the world cracked open. Or at least it shook. After she wrote about being transgender in American University’s campus newspaper the day after her term as student body president ended and Jezebel covered her coming out, millions of people came to know and be inspired by McBride’s bravery.

McBride, who is busy doing interviews and preparing for her upcoming internship at The Victory Fund following her coming out, is studying Political Science at American University, and will return to school next spring following her transition. She’s from Wilmington, Delaware – and proud of it – and has two brothers, one brother-in-law, and an adorable dog named Kobe.

I took the opportunity to talk to Sarah more about her experiences and put her beautiful face on Autostraddle because I know her personally; it is my expert opinion that her story not only exemplifies the personal triumph of coming out, but also illustrates the bravery and sense of responsibility often linked to non-normative identities. Before we begin, I will be clear: I am immensely proud of her. It is my honor and privilege to be her friend.

Sarah McBride and I met in May of last year, when we began our terms in the Student Government. She was my boss – I was Director of Women’s Initiative and she was the President – but in the beginning of her term I called her “Tim.”  When she came out to me, I was sitting in the backseat of her beige Toyota Highlander and had just gotten back from New Jersey. She had just come out to her parents. She wore a dress to the metro and told me as soon as I sat down in the cold leather seat. It was December 29.

On May 1, one day after our terms in the Student Government had been completed, she told the world. McBride came out both through her old Facebook account and an Op-Ed in our student newspaper, The Eagle. She took it upon herself to not only declare her gender identity, but also use her position of former power at our university to lend knowledge and personal experience to what that identity meant. In her piece for The Eagle, she wrote:

For far too many trans individuals, the reality is far bleaker; coming out oftentimes means getting kicked out of your home. I say this not to diminish my own experience, but to acknowledge the privilege and opportunities which have been afforded to me.

Today is the next day of the life I’ve already had, but at the same time, the first day of the life I always knew I wanted to lead. Starting on Saturday, I will present as my true self. Going forward, I ask that you use female pronouns (she/her) and my chosen name, Sarah.

With every birthday candle extinguished, with every penny thrown, my wish was always the same. I am now blessed with the opportunity to live my dream and fulfill a truth I have known since childhood. My gratitude is great to my family, friends and this university for accepting me as the person who they now know me to be, and for letting me show them the possibilities of a life well lived.

I now know that my dreams and my identity are only mutually exclusive if I don’t try.

“I would say I’ve known as long as I can remember,” she told me.

“I remember when I was 3, 4, 5 – going over to my friends’ houses and them dressing me up as Cinderella… I knew when I looked around that it meant something more to me than it did to the other boys doing it, and I knew also that the clock would strike 11 and I would have to go back to being Tim.”

Coming out was a long journey for McBride, complicated most by her political ambition. “At six or seven,” she added, “I had developed my dreams. Some kids wanna be astronauts, I wanted to be the President of the United States. That dream gave way to somewhat more realistic and less arrogoant dreams.” McBride was cognizant of the threat her trans identity could pose to her plans.

“I told myself if I could make being Tim worthwhile for other people by changing the world, that it would somehow make being Tim worthwhile for me,” she said. But through her work at AU on issues like gender-neutral housing and the Student Government’s promotional campaign, “Live True to You,” she realized that she could no longer hold back the truth.

“At one point,” she explained, “the Director of Housing and Dining asked me, he said, ‘Why are you pursuing this? Why is your heart in this fight specifically?’ and I gave an answer that was half-true. But the glaring half that was missing was the first time I had come face-to-face with the fact that I was living a half-truth.”

And so, she came out.

“I remember looking in the mirror, saying to myself, I’m transgender. And I remember the shame that ensued right after that. I’d look at myself and say, ‘no you’re not, this is something you can keep inside, you’re not trans.’ I came to terms with that realization sort of, right before Christmas,” she told me. “I remember sitting with [the only girl who knew] and saying, “the process I’m going through right now is me getting used to it. It’s only a matter of time until I accept it. And if I can say that out loud, then I already know the answer.”

Coming out, however, is an understatement of what happened when Sarah told the truth. McBride’s personal journey has become fodder for publications and foundations nationwide, including the much-noted tweet from the Born This Way Foundation about her Op-Ed and a recent Jezebel post. Most people would be overwhelmed or bewildered by the fame that ensued. Not her.

“This is such a process, and I want it to be as self-reflective as possible,” she said. “I [want to] understand as much in my life as possible, the roots of everything in my life as much as possible. And so in that respect it’s been very helpful to sort of constantly revisit the journey. Each time I tell [my story] I learn something new.”

She added, “I came to terms with this six months ago. It had been, prior to that, my biggest secret. And now, the entire campus knows.” Also, the whole world. 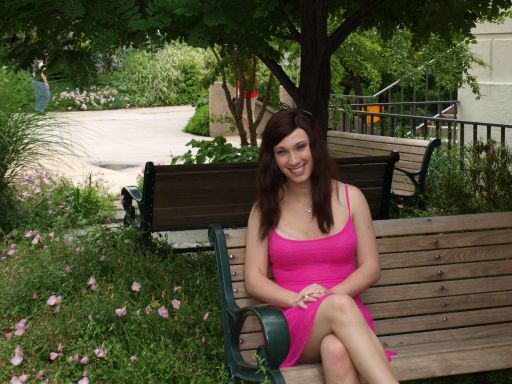 I asked McBride a few “give me your top five ___” questions, including Top 5 Role Models (“God and Carmen Rios”) and Top 5 Favorite Women (“this is my inner nerd,” she says, before listing Hillary Clinton, Eleanor Roosevelt, and Katie Couric). I found out her favorite Spice Girl is Ginger (formerly Baby, but who didn’t outgrow Baby?). But I didn’t even have to ask her for Top 5 Words About Coming Out because as soon as we dug in to what it was like for her, she spurted them out.

“Surreal. But surreal in a good way. Comforting. Liberating and more than anything – empowering,” she said, leaning back after thinking hard about each one. My biggest fear was disappointing my friends and my family. … I had always felt that people believed in me, people saw this potential in me, and I was worried that coming out would destroy that. The support I’ve received and outpouring of love has rebuilt any self-esteem that I lost.”

McBride cites the specific support of not only her friends, but her parents, Mara Keisling of the National Center for Transgender Equality, and Governor Jack Markell and his wife Carla of Delaware. She describes them all as “supportive” and “loving.”

“That has been very moving, to see them embrace me in the way that they have,” she said, adding that her friends “have shown me what true acceptance and true embrace and true love really mean.”

So if all is well, and reactions are warm, is she still going to run for President? I’ve always hoped she would stick with it so I could run the White House Committee on Women and Girls, but she’s taking space from rigid goals for now. “What I’ve learned and what I’ve realized … is that being an elected official is not a goal in and of itself. Your goal should be to positively impact the world and improve people’s lives. The means through which you change the world should be entirely secondary.”

Right now, most things for McBride are completely and totally in waiting. No one doubts that she’ll make big changes in the world, and it’s up to McBride to decide how she’ll pursue her goals. Whether or not the news outlets are ready for that doesn’t matter; we can all can rest easy knowing her story will unfold in a matter of her lifetime. McBride’s going places. And she’s gonna feel great kicking ass at every destination.

McBride hesitated at the end of the interview, adding, “the biggest takeaways are how important it is for the privileges I’ve had [like support and love] not to be privileges, but rights for all.”

I can’t wait to see where life takes her.