Hello chitlins! This is a thing that Laneia got in her formspring inbox:

“Get Baked: So you have to be a grown up and take lunch to work/school?” Please?

Why yes! Yes, that is a thing we can do. I will probably never be a grownup for as long as I live, but I have packed many a lunch and lived to tell the tale. Let’s make moves.

We’ve actually already done a post about lunch. It does a fairly solid job of preparing you to eat food in or around the middle of your day, with some suggestions as far as lunch content and technique. When you ask about packing a lunch to go, though, there are some considerations to be made. Portability! Utensils/auxiliary tools required! Minimal fussiness (i.e. anything with a garnish or that requires assembly, you can get the fuck out)! Given these limitations, I submit that soups and salads, the two most common lunch items (obviously there’s also sandwiches, but I think we can agree those deserve their own article/paean) are popular for a reason: they have been vetted by the Darwinian survival laws of commuter lunchtime. Let us investigate.

I have a loosely structured theory of lunches that has no nutritional or scientific basis whatsoever, but which has kept me alive and from scurvy for this long. The rule is that ideally, a good lunch (or meal, I guess) should include the following things:

+ Vegetable (you  have heard of these I believe)

+ Protein (nuts, legumes, soy, I don’t know, what else has protein in it?)

Obviously, if you are someone who eats meat or something, you have that as an option. Mazel tov.

Personal preferences dictate that it’s best to choose things that are good at room temperature, since depending on your work/life situation you may not have access to a fridge, and also the waiting for the microwave/reheating/possibly ingesting carcinogens thing is not sexy to me. Just my thoughts.

This leaves you, clearly, with a lot of choices still to make. I believe firmly in letting you follow the dictates of your own conscience. These are the choices I made: lentil salad, hummus, bell peppers, and salted almonds. See Exhibit A. 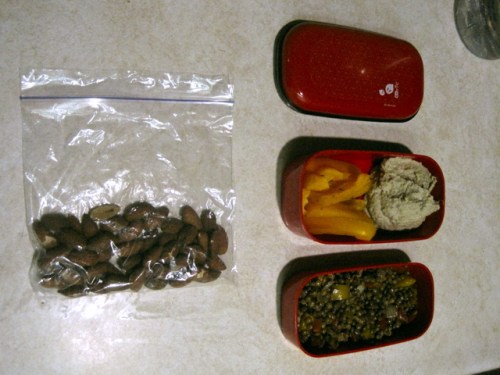 I personally like compartmentalized lunches like this because it allows you to snack on them throughout the day, like a giraffe or koala or something, which I personally find is a better recipe for feeling energized than one big meal at noon. So, for me, a hearty salad which contains some grains and legumes (as well as veggies) is a really good place to start, and some protein-y/fatty things like nuts or peanut butter, and maybe an extra vegetable if I’m feeling really virtuous that day. Bam, you have a lunch. Want to start with this lentil salad? You should! It was delicious.

Lentil Salad with walnuts and Herbs

Originally from the Kitchn

1. Finely chop the sundried tomatoes and soak in an equal amount of boiling water. In the meantime, bring the lentils to a boil in the broth or water. Turn the heat down low and let them simmer for 20-30 minutes, until they’re cooked through but not mushy.

3. You have the option to toast your walnuts, if using. I would recommend taking this route. You can put them in a dry pan on medium heat for a few minutes until they’re brown-er and smell walnut-tier, or you can put them on a baking sheet in like a 350 degree oven for maybe 10 minutes.

4. We’re moving towards a point at which all the aforementioned elements of this recipe — drained cooked lentils, pepper and onion mixture, walnuts — are going in the same bowl. Once there, you can mix together your dressing — surprise, it’s made up of the ingredients we haven’t used yet, the olive oil, parsley, mint, lemon juice and zest, pomegranate molasses, salt and pepper — and toss it in there. Cheese too if you’re into that.

5. And you’re done! Put it in a container, the cuter the better, and leave it in your fridge. The flavors will get better overnight, and this should be okay eaten at room temperature the next day (or refrigerate it til lunchtime, that’s fine too).

See? Wasn’t that easy and fun and didn’t it promote spiritual growth? Also, I can’t count, but I feel like there was more than one food group. Some more ideas for hearty salad-ish things:

Another tried and true lunch option, if it’s *cough* about to be the dead of winter and salads are less appealing than hot liquidy things, is soup! You can pack a lot of vegetables into soups, and frequently grains too, if you’re smart about it. You may remember we’ve discussed this before. It was bitchin’. Soup is perfect for lunch because you can pack a lot into it, it’s very portable in the right container (with the proper equipment, you don’t even need to reheat it!) and it’s easy to make WAY in advance. Save single-serving size containers — I like the ones you get Indian takeout in — and when you make soup, make twice as much as you think you should, and freeze the rest in single lunch amounts. Then, just take one out the night before you’re going to eat it, leave it on the counter, and BAM. LUNCH. If the abovementioned post didn’t give you enough ideas (WHAT IS WRONG WITH YOU) then here are some more:

Now that we’ve gotten that out of the way, we can get to the real important question: what can you put this lunch in that will make it cuter than everyone else’s lunch, cementing your superiority? Luckily Laneia has already addressed this for you.

Now you are ready! Pack up the night before like a champ, get a good night’s sleep, and go forth and be nourished. 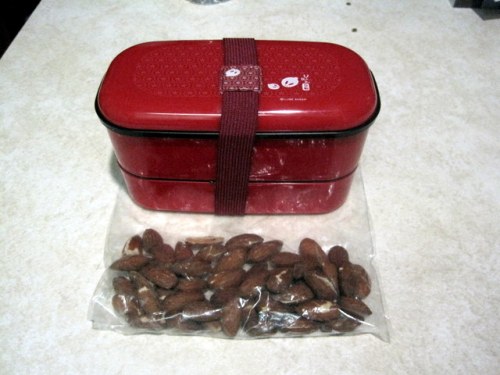