Every single day new apps are being rolled out. Google Reader replacement? There’s an app for that. Girl Guide cookie seeker? There’s an app for that. Queer dating? Well here’s the exception. Even though there’s a constant stream of new apps for queer men and women, the male market thrives while the female market stays relatively stagnant. With any app release you have to give it time to get off the ground before you can call it a success, but when you look at the numbers for Grindr and its ilk, you have to wonder what’s holding back the lady market.

There are plenty of location-based dating apps that try to follow Grindr’s model and I’ve had experience with a lot of them. Most of the offerings are simple: here’s a grid of users and here’s the way to message them. But while Grindr’s six million, Scruff’s four million and Adam4Adam’s three million users offer an overflowing buffet of suitors to anyone anywhere in the world, the female market is limited in both app and profile selection. And more to the point, does knowing your proximity to another gaymo give you enough incentive to meet up? And what if the closest user is two borders away?

Where is she? via Wing Ma’am

I’ve often wondered if w4w dating up apps falter because our needs are at odds with the needs of our apps. One could argue that women simply don’t want hookups, but I don’t believe that’s the case, nor is it the only problem. If we buy into the idea that men want casual partners and women want long term relationships, the refractory period before another success could be a few hours for a dude and a few weeks, months or years for a lady. So a happy Grindr user will keep logging on, while his female counterpart will turn away from her app and probably cause her new partner to do the same. Maybe the majority of us want different things, but how do you balance successful experiences and user loyalty?

Well you could start by running a queer website with an incredibly hilarious staff (I know we’re the reason some of you are dating), but a Straddlr app isn’t in the cards right now. But if A-Camp was any indication of how queer women meet, date and hookup in the real world, we should put community at the forefront and leave fucking on swings as a happy bonus. That’s why Wing Ma’am could be different. Not only because it knows exactly where you are or because it has a shiny, bright UI, but because it has an alternative view of queer dating beyond “just a hookup app.”

I spoke to Ariella Furman, the founder and creator of the Pittsburgh-based Wing Ma’am as they await the results of their IndieGoGo campaign. Following a breakup in 2012, she teamed up with some Carnegie Mellon grads and decided to put all of her extra energy into starting something for the LGBT community. Instead of drawing up an app to meet her needs, the development process started by interviewing hundreds of queerios to figure out what potential users truly want. Unsurprisingly it isn’t just a pink version of Grindr.

Furman told me their concerns extended far beyond dating.

When surveyed by Wing Ma’am, LGBT women often noted that in their city, it was hard to meet people or know what was going on. They also said that there was a lack of unity and access to information was difficult. When they did attend queer lady events, they didn’t think there was enough attendance or participation. Some people felt like it was hard to feel a part of the community. Even if this is not the case for all cities, I believe that most LGBT women can agree that the scene is a bit “clique-y.”

The idea behind Wing Ma’am is to provide a centralized place for women to safely meet other women as well as stay informed about events. For the first time, we’ll have access to each other as well as to information. Wing Ma’am serves as a guidebook for the LGBTQ women, no matter how she identifies, or even if she doesn’t identify. Everyone will feel welcome and the mobile space will be inclusive for all, LGBTQIA and otherwise. A success story of a standard user would be that she finds friends through the app, starts attending events within her interest group, and eventually creates her own event related to her interest group. We want Wing Ma’am to be about everything: the social networking, the profile-making, the friendships and the matchmaking, the event making, and sure, the inevitable hook-ups that will probably happen.

Wing Ma’am wants to break down social barriers, inspire unity and start a social movement by focusing on community interactions and the ways people connect in the real world. In addition to one-on-one chats, it’ll give users the opportunity to advertise to all of the queers in their area, from giant raging parties to craft shows to Pride parade meetups to low-key poetry readings to Autostraddle brunches. Their polls showed 40% of those surveyed are willing to host their own events, but right now only 5% of them are actively doing so. Large scale promoters, individuals and anyone in between can advertise their events and get noticed with minimal legwork. Even in small cities without a major gay strip, curious queers can still find one another by tagging their profile with all of their interests. That way even if you aren’t part of The Clique, you can still log on, realize your barista’s queer, discover she needs an alternate for dodgeball and play a round the same week. 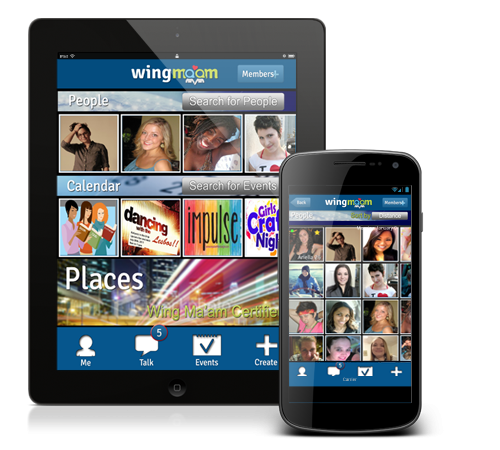 Not just a shiny grid via Wing Ma’am

But part of building community involves creating a safe space. Echoing Crazy Blind Date, events are limited to public venues to keep everyone in line. In their next wave of development, they’ll introduce a user-generated and verified directory of safe, queer-friendly spaces with the best places earning a Wing Ma’am Certified designation. It’ll give a nod to LGBT-owned establishments so your soon-to-be book club can throw its rainbow dollars at a friend! On the user side of things, their support team seeks to prevent harassment by scanning conversations for blacklisted words and stepping in when needed. And if you prefer that users don’t know your exact location, you can turn off the locator and still show up on their profile feed.

Even though it’s easy to call Wing Ma’am a lesbian app, as many of us know, L is just the tip of the iceberg. Identities, orientations and expressions are often misunderstood and forcing someone to choose between M or F creates a huge barrier to entry that many aren’t willing to straddle. Wing Ma’am will allow users to identify as Lesbian, Bi, Trans*, Queer, Androgynous, Pansexual, Intersex, Questioning, Asexual and/or nothing at all. You can finally enter a queer space as labelled or label-free as you want. If you’re interested in a particular subset of human beings, you can search for them specifically. And even more importantly, Wing Ma’am will listen to its users, adding more options as they’re educated about all of the different nuances. You can even give Furman a call directly!

We have had very humble beginnings, but we always plan to stay open and attentive to the queer lady audience no matter what. Listening to our community is what has guided up from the beginning with our surveys and what will guide us going into the future. We will keep evaluating our app not only on technical fluidity, but also on safety and inclusiveness. We will constantly be improving. This is a grassroots effort and we want to stay as close to our users as possible!

If a queer lady app that focuses on community sounds like a thing you want to download, maybe it’s time to get on board. Following the assumed success of their fundraiser (they’re more than halfway there!), they’ll test the app in July in three cities polled from IndieGoGo. It’ll be offered as a free app, but with added perks for paid subscribers. Then they’ll tackle the rest of America in August and move onto Canada and the UK. If you want to help bring Wing Ma’am to your city while giving yourself an excuse to talk to cute passerbys, sign up to be an ambassador and get some free swag while you’re at it. Because when it comes to getting a foothold in the gay app market, even a Wing Ma’am needs a wingman.