Welcome to the millionth billionth installment of Make A Thing,  where the crafts are made up and the sewing doesn’t matter.

Father’s Day is this Sunday, June 16th. Did you know about this? Thank goodness someone told me or I’d have spaced it and been the world’s worst daughter because I have not one, but two dads (one just has a silly “step” in front of his title).

Sometimes it is difficult to craft for men or even masculine of center girlboifriends. I’m pretty against all stereotypes of the masculinity/femininity divide, but for example, my step-dad would probably not enjoy a burlap-wrapped mason jar full of lilacs the way my mother would. Also, neither of my dads wear ties, what is up with that?

Here are nine of the best DIYs for Father’s Day I’ve found. Only one of them is a tie. 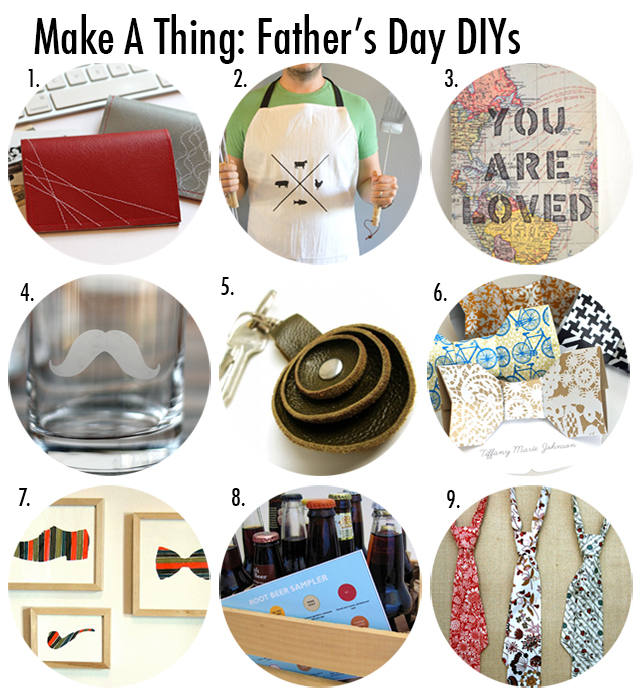 1. My step-dad keeps all of his gift cards in the pocket of his shirt, and months after receiving them and still having not spent them, he’ll take them out and stare at them for awhile and ponder what he’d like to buy. Maybe your dad is also just like this. This small, vinyl wallet could be the alternative to his shirt pocket. Tutorial via {How About Orange}

3. Maybe you live in a different place than your dad. Go the sentimental route with a map/stencil combination. Tutorial via {Small For Big}

4. My dad has had a handlebar mustache for like twenty years, so he’d definitely appreciate this, but maybe your clean shaven dad will, too. Tutorial via {No. 2 Pencil}

5. Leather keychain for the guy who always loses his keys. Tutorial via {Shelterness}

7. Your father needs some new art. Tutorial via {Design*Sponge}

8. This is a root beer sampler, but it would work with regular beer, too, I’m positive. Tutorial via {Homemade by Jill}

9. Your dad has gotten so many bad ties for Father’s Day. Why don’t you sew him the most dapper tie of all time to make it up to him? Tutorial via {The Purl Bee}

What else have you got up your sleeves for Father’s Day, thing-makers?