feature image via The Fly

Sunday night was the closing ceremony for the 2012 Olympic Games, which meant a lot of things for a lot of people. For me personally, as someone who hasn’t followed any of the sporting excitement of the past two weeks, it meant that my ten year old self got to relive her glory days via the Spice Girls performance (which I watched online, not live, because I don’t have a teevee). Let’s use this opportunity to discuss the Spice Girls and What They Meant To The World, shall we? Crystal once referred to them as a “personal musical milestone,” and I believe she is correct. Here are five important memories I have about the Spice Girls, in no particular order. 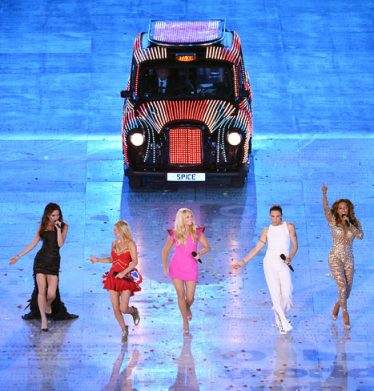 The Spice Girls at the 2012 Closing Ceremony via US Magazine

1. In 1998 my parents decided to move from Canada to the United States and I was pretty sure my whole life was going to be ruined. In an attempt to make me feel less despairing, my mother somehow obtained tickets for me and a few friends to go see the Spice Girls. It was a Huge Deal because I’d never been to a concert before, and also we would be going alone, with no parental supervision. On the day of the concert I spray painted my hair pink and piled into a minivan with my friends and our parents. (We — the four girls — would watch the show while our moms hung out at a cafe nearby the venue.) However when we got to the venue, my friend’s mother decided there was no way she could let the four of us enter the stadium alone and make our way to our seats. Instead she grabbed the four tickets, ushered us toward one of the many entrance, and explained why she would be joining us inside “just to settle them in.” With charm, chutzpah, and pure determination, this woman got herself into a concert for which she had no ticket, just to be sure she could safely settle us into our seats before leaving, as promised, to hang with the other moms. I was in total awe. The concert was incredible, obviously, but what I really took away from that day was the knowledge that it is possible to politely assert oneself, and that you should always try to get what you want, even if it seems impossible. I try to remind myself of this when I am dealing with pushy sales people and apartment brokers.

This Vanessa is not me, actually, it’s a different Vanessa! But I asked if I could use this tweet — it’s just so true! Was anyone talking about anything else afterwards? No.

2. In 2008 the Spice Girls came together for a reunion tour, and it was the Biggest Deal. I went with my college roommate and it was exactly as amazing as you’d expect it to be, but nothing really crazy happened to us, we just wore gold sparkly clothing and a lot of glitter makeup. Riese, on the other hand, has an excellent Spice Girls Reunion Tour story. Once upon a time, Stef called Caitlin after the concert to see where everyone was, because Caitlin was driving everyone back to the city — which leads me to wonder if Riese and I went to the same show, seeing as I also had to drive back to the city — and when Stef called, Caitlin said, “Shit is crazy! Haviland is hooking up with Ginger in the back!” And then Stef thought she was serious for approximately 16 hours, until she asked again the next day. “And she was so mad when she found out it wasn’t true and is maybe even still mad,” said Riese. For a visual to go along with this anecdote, see below. 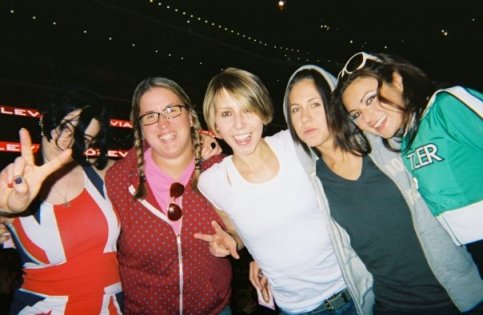 3. My favorite song off the first album was Last Time Lover. It was number five on the CD, and five happens to be my favorite number, but that was just a coincidence. The song was so catchy and had a great beat and felt really sexy and as a ten year old just starting to develop boobs I felt like that song was Really Important. But the Carpool Moms had other plans for my favorite song! Amongst themselves they had deemed it inappropriate, and every single one of them skipped it when the song came home while we were driving home from Jewish Day School. I complained to my mom, and she told me to listen to the song on my Discman. So I did. Incessantly. I honestly believe it made me more sex positive. I am the girl I am today because of song #5 on the first Spice Girls album. 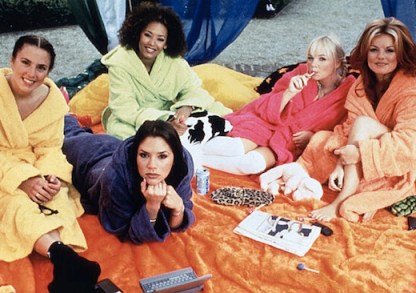 Can we talk about Geri’s hair? via Coco’s Tea Party

4. About six months ago I discovered Sady Doyle’s Defense of the Spice Girls (she wrote it in November 2011 but I was late to the game) and it both asked and answered many questions about the Spice Girls that I hadn’t been able to articulate on my own and yet very desperately wanted to address. The Spice Girls, manufactured to look like best friends who just happened to become famous for singing and dancing and having fun, were actually carefully orchestrated by a group of men to exploit a DIY feminist message that was already being broadcast loud and clear. Everything down to their nicknames was a careful marketing choice, and to be honest their nicknames are one of the things that bother me most when I allow myself to become critical, because I hate the idea that all girls can be boiled down to one thing. But I still allow myself to wholeheartedly play along (wait for the end of this post when I reveal if I’m Scary or Baby). Why?

Because I was the exact demographic the media men were marketing to, and not yet well-versed in the terms and thought that one learns from majoring in women’s studies at a school like NYU and existing as a women in this world, I missed the part where the Spice Girls were a problem. To put it simply, I bought the kool-aid without even knowing it was being sold. But as Doyle argues in her brilliant essay, I don’t actually think the end result was a problem. Here I am today, writing and speaking my mind, a confident queer feminist raised on Spice Girl brand “Girl Power.” And I’m not sure I want to unpack the Spice Girls in the way I might if they hit the scene today. I like their message, but more than that, I like liking their message. Doyle writes:

There was lots of giggling, with the Spice Girls; there was lots of hugging; there were a lot of bright, colorful outfits; there was a lot of hyper, bubbly silliness, and sometimes it would just wear a cynical person right out. But the Spice Girls weren’t for cynical people. They were for very young girls— sometimes girls who were still in grade school. (Those Spice Girl dolls weren’t selling to 22-year-old gender-studies majors. At least not unironically.) And in the moment that those girls were starting to figure out what “girlhood” meant, to them, they were relying on an image of ladies having fun together and supporting one another.

The Spice Girls weren’t for cynical people. And maybe that’s what feels really good to hang on to: the recognition that at one point in time, I was less cynical — we all were — and the Spice Girls were for me. 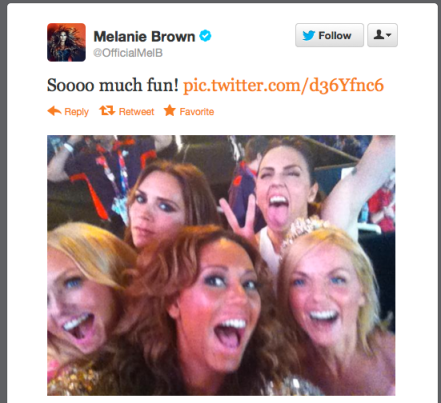 My friend posted this on Facebook and wrote, “Best photo of the night.” He is right.

5. Last night the Spice Girls killed it during the 2012 Olympic Games Closing Ceremony, and it felt like they’d never left center stage. It has been almost 15 years since I first saw the Spice Girls in concert — I have known about them for more than half my life! — and I felt as giddy watching them perform yesterday as I did the first time it happened. Facebook blew up once the performance was over, and I have hardly seen any negative commentary. Twitter was much of the same. It seems that as a generation we have indeed decided that the Spice Girls deserve the pure pop happiness they exude returned to them, and somehow a generation raised on snark and critique is going to let these women off the hook. However they were formed, they got together and they had fun. They’re still having fun. And you know, that’s a good reminder for all of us. 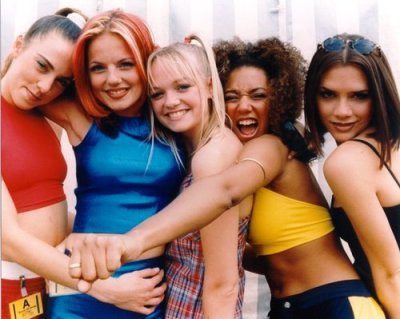 I always said I was Baby with a side of Posh. I think I still am. Zig-a-zig-ahhhh.