A couple of weeks ago, we — Brittani, Cara, Grace and I — received a terrifying demand from the Powers That Be (otherwise known as a polite email from Laneia) requesting single members of the team who might be interested in a unique challenge. We, the few, the proud, the unspoken-for, would boldly sign up for Tinder, the hot new dating app that all the kids were using, and learn about what such an app was like through a queer lens. I’d known a few straight women who swore by it, but from their stories it had always seemed sort of shallow — like a heterosexual version of Grindr, but without the oomph. I can’t say any of us were thrilled to sign up, but we knew what we had to do: we had to sign up for a dating app and prepare to meet a lot of ladies… for science.

The others agreed to be a part of this Tinder project out of the goodness of their hearts, but for me it actually seemed to be a logical thing to do. I’d just moved to Los Angeles from New York City a few days prior, and I was brand new in a huge city filled with potential babes. I’ve been single for a couple of years, but I’m no stranger to online dating. I’ve met some really great people on OkCupid and was curious about what Tinder might look and feel like.

I learned the answer very quickly: Tinder feels shallow and ephemeral. Once you sign in, you’re swept into a veritable ocean of total strangers. The app attaches itself to your Facebook account and gathers profiles of people who presumably fall within your desired search parameters (mostly age and location). Although I had my app set to search for only women, a large percentage of my results were male, and I wasn’t sure if many of the women Tinder presented me with were actually interested in dating girls. When a profile comes up, you see only the picture, name and age of your potential match. You can swipe right to “like,” swipe left to reject, or if you’d like more information, you can click on the photo to view a brief profile. Each profile contains a short bio, any shared friends or interests you might have (based off your Facebook information), and usually a couple of extra photos. If you both “like” each other, you have the option to send a message, and what happens next is up to you.

There’s not much information to work with, so most of your reaction is based upon that one initial photo – and once you reject someone, there’s no way to reverse it. At times, I felt like I got trigger-happy clicking “nope” on so many faces, and I’d start to feel bad about myself. I found myself “liking” profiles of people who just seemed nice, purely out of solidarity. Instead of helping me meet interesting people and figure out my new west coast life, Tinder placed me in a downward spiral of Jewish guilt.

Although I date guys from time to time, I wasn’t super interested in meeting any off this app – but Tinder had other ideas, and continued to suggest them. After a couple of days, the only people I’d matched with were men I felt lukewarm about, and I was starting to doubt my ability to function in queer circles in Los Angeles. I tried changing my pictures around to photos where I was playing instruments or doing something that might spark a conversation with a cute new girl. Often after I’d clicked through just a few profiles, the app would inform me that there was nobody around, that I was all alone in this world, that I was going to die alone and I’d better get used to it.  Sometimes this would happen while I was sitting right next to Grace or Brittani, which was really confusing. I expanded my search parameters to include Brittani and Grace’s age range, but never found them (probably because we’re all Facebook friends). Grace even tried deleting me off Facebook, which didn’t help us find each other on Tinder, but did hurt my feelings. 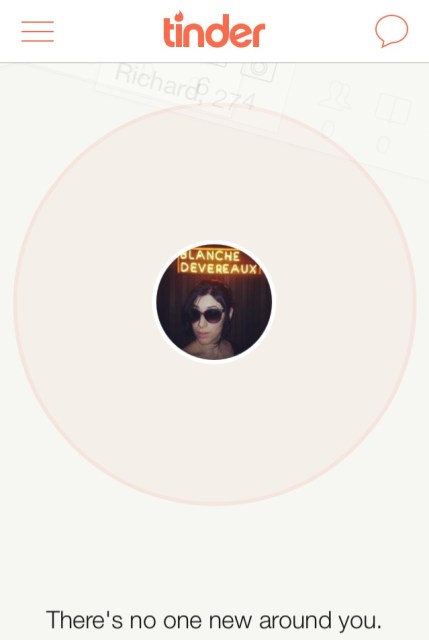 And there never will be, sorry.

Learning the culture of a new city is always challenging, and I wondered how different Tinder might be if I could search for people with similar interests. When you walk into a room full of new people, it’s rare that you’ll meet even one person you share tons of common interests with, and Tinder was like an infinite room of totally random strangers. It could be days before I’d find a girl with an elaborate sleeve tattoo, or one who listened to Depeche Mode, or one who read the same kinds of morbid Russian novels I liked. The only way I could find these people was by rejecting dozens of others, and even though none of those people would ever know I’d placed an orange “NOPE” stamp across their foreheads, the action still took a toll on my heart every time. The one common interest I did seem to have with a lot of girls on Tinder was JWoww from Jersey Shore, and (while I unapologetically adore JWoww) that didn’t seem particularly encouraging as the basis for any kind of relationship.

At various times, all four of us encountered the insidious Tinder bot disguising itself as Zosia Mamet from HBO’S Girls, enthusiastically endorsing her own interview on Glamour Magazine’s website. I’d pay good money to have been a fly on the wall at whatever board meeting decided that Tinder was an appropriate social media marketing tool, and lament that Zosia and I will never meet and fall in love and feed each other rugelach by candlelight. The Zosia bot seemed like a rite of passage among the four of us, and none of us felt truly a part of the Tinder Project until each of us had been subjected to her wrath.

At long last, nearly a week into this experiment, I finally matched with an icy-looking blonde girl whose profile offered absolutely zero personal information. By this point, I was happy to match with a real live human being who wasn’t a robot or a bearded dude. She sent me a poorly spelled message, and when I didn’t respond immediately, she sent another, asking how my day was. This was my first actual correspondence with a girl on Tinder, and as I weighed my options, I received a notification that she’d sent a third message. By the time I’d opened the app to read it, she’d apparently swiped left and deleted herself from my matches. I’m not sure what the third message said, but it was very clear I’d been dumped by someone I had never communicated with in my whole life. 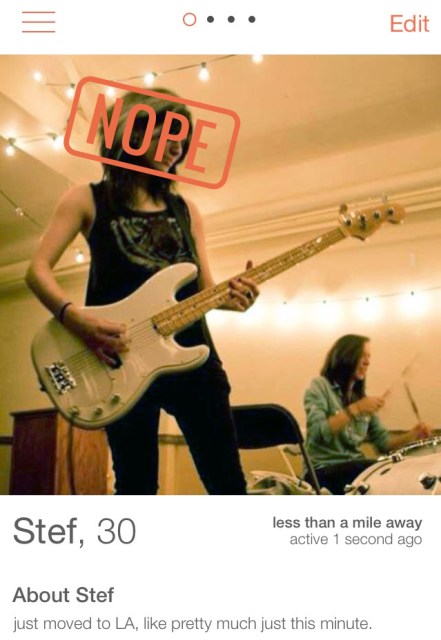 The next day, I struck veritable Tinder gold – I matched up with a guy who actually worked for Tinder. The engineer declined to let me use his name for this interview, but did answer some of my questions. Namely, I was concerned with why so many men and straight women were showing up in my search for only women interested in women – in fact, why had he showed up in the first place?  My new Tinder boyfriend’s answers did little to comfort me. He insisted that the legions of straight girls must have listed themselves as also seeking women, and that perhaps they just couldn’t read the profile settings properly.

As for the men, he explained that personally he’d been messing with his settings to test out a technical change, but theorized that the men showing up in my search had listed themselves as women seeking women in order to meet some crrraaaazy open-minded bisexual chicks such as myself. I can’t say I was convinced (that seemed awfully discouraging), but that (gross) explanation might have some merit. To test his hypothesis,  I changed my settings to male seeking male. I found one woman in maybe sixty men. My Tinder employee seemed to be right, and this realization made me feel especially icky about any of the other guys I’d matched with. For the first time in a long time, I found myself aching for that brilliant OKCupid setting that blocks straight people from viewing your profile.

Stef has written 451 articles for us.