In addition to being the month we celebrate Autostraddle’s fifth birthday, March is also Bisexual Health Awareness Month, brought to you by the Bisexual Resource Center.  Inspired by the White House’s roundtable focusing on bisexual issues this past September, the BRC hopes to use this month to educate the public about issues that specifically affect the bisexual community, specifically the alarmingly large percentage of bisexuals who suffer from depression, struggle with alcohol and substance abuse, are in abusive relationships or suffer from poor physical health, among other concerns.  Although some studies have estimated the bisexual population as constituting roughly 50% of the LGBTQ community, bisexual-identified individuals often describe feelings of alienation or erasure, often rendering them less likely to seek help for physical or emotional ailments — studies show that bisexual women have the lowest levels of social support of any group, which may shed some light on why bisexual men and women have the lowest emotional well-being of any sexual orientation group. Bisexual poor health can be compounded by intersection with other identities that also experience poor health and poor healthcare because of marginalization, like bisexual trans people, bisexual people of color, and especially trans bisexuals of color. The theme of this year’s Bisexual Health Awareness Month is “Bi the Way, Our Health Matters Too!” and the goal is to encourage bisexuals to be conscientious about maintaining their own wellbeing, while highlighting the amazing work that’s already being done by LGBTQ organizations around the world. 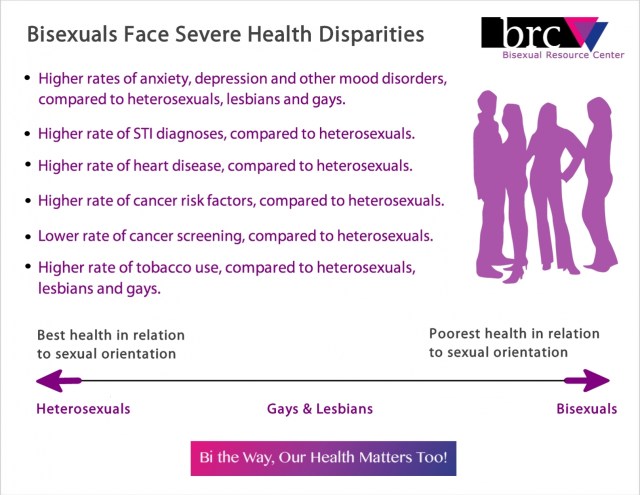 Image via the Bisexual Resource Center

Throughout the month, the BRC will roll out relevant information through their Facebook and Twitter accounts highlighting issues affecting bisexuals and ways the community can help.  This week’s theme is “Mental Health & Biphobia,” and the BRC have accumulated a wealth of resources including the National Gay and Lesbian Task Force Bisexual Health Report, One Equal World’s “Biphobia: The Attitude that Plagues the LGBTQ Community,” and this great “31 Days Of Bi Wellness” calendar put together by the Los Angeles Bi Task Force.

According to a statement from the BRC’s president, Ellyn Ruthstrom,

“The Bisexual Health Awareness social media campaign will be focusing attention on important health issues that are affecting the bisexual community. With more research indicating that bi people are experiencing severe physical and mental health disparities, we think it is imperative to bring this information out of the shadows so that we can build more effective ways to address them. Our community is suffering and we can no longer afford to be the invisible majority of the LGBT community.”

Other topics the BRC plans to cover during Bisexual Health Awareness Month include “Safer Sex & Sexual Health,” “Nutrition & Physical Activity,” and “Intimate Partner Violence & Sexual Violence.”  The program officially launched Monday following a 12-hour “Tweet-a-thon,” but participants are encouraged to get involved in the conversation all month long by using the hashtag #bihealthmonth.