I gotta be honest with you guys — it’s pretty hard out there for a single weirdo on the Internet.  When it comes to online dating, a queer lady’s options are limited in terms of what works and what doesn’t.  Autostraddle has written extensively about OKCupid’s triumphs and failures, and some of my fellow writers and I spent the last two weeks putting together an all-star post (coming soon!) about our collectively miserable experience using Tinder, the hot new mobile app all the kids are using. What we found using Tinder was that it was difficult to meet like-minded women no matter what, and while some people invariably do meet and form significant relationships from dating websites and apps, the system itself is still quite male-focused and alienating. There is infinite room for improvement.

With the advent of new dating app Dattch, it seems that our prayers may have been answered. Developed in the UK by actual human women, Dattch (pronounced like “catch,” presumably unrelated to funny straight person Rachel Dratch) exists specifically for queer women — which means less creepy messages from straight cis dudes, and more opportunities for gay ladies to build their own communities for themselves.

I spoke to CEO and co-creator Robyn Exton, who was in San Francisco preparing to unleash Dattch upon the American public. (Dattch had just won “Best Design” at the Launch Awards, and Exton was gearing up to demo the app at this weekend’s Lesbians Who Tech Conference.) Dattch was founded in 2012 by Exton, Emily Moulder and front-end developer Vesna Planko, and was intended to be the antithesis of every Internet dating program currently out there, in that it caters exclusively to women interested in women (While the app may expand to include trans men, genderqueer individuals and other non-binary folks, the current focus is on bisexual and lesbian women).

Exton explained that she initially worked for a branding agency who had an Internet dating service as a client, which piqued her interest in building a better service.  When a good friend broke up with her girlfriend, she and her other friends began the process of helping the newly single girl sign up for the most popular dating app in the UK at the time. Suddenly, it dawned on Exton: “I thought, this is terrible!  Why are we doing this?!  I use apps frequently, I use websites frequently, and this design was just horrific… so I decided to quit my job and start making it!” In September 2013, the app launched in the UK, and it’s about to make its stateside debut. 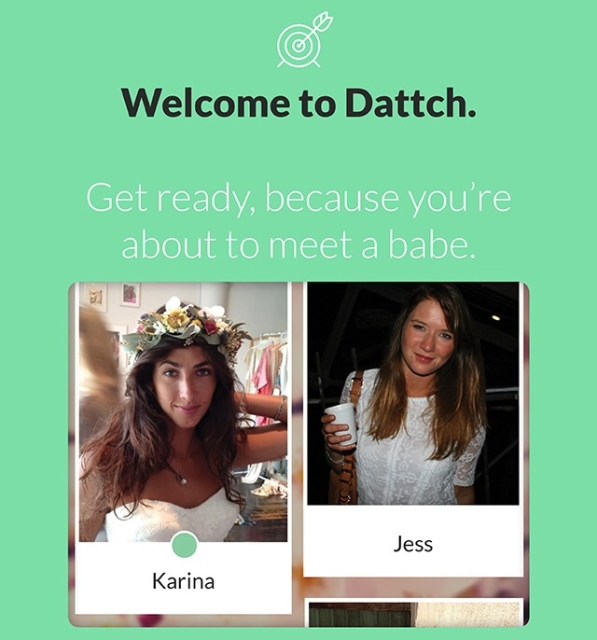 What a coincidence, I just happen to be in the market for some babes.

Upon downloading Dattch, the first thing that stood out to me was how different the profile pages were from any service I’d used before. While you’re still required to fill in typical information like your age, height and sexual orientation, Dattch also allows users to upload photos to explain the sorts of things they’re into, or fill out little text blurbs (some prompts are provided to get you started, but most are completely up to you). Exton explains:

“We were running this private test and we were looking at how girls used it.  We found that some things just weren’t working, and in all previous dating apps previously. Tech is a very male-led industry, and all the apps were being designed about how men behave, the triggers that men need, how men communicate, and what they need to see to send a message. We used to have really simple profile pages with just a picture, and every message would start with ‘Hey, you look nice…’ The reply rate was shit, because you’ve got nothing else to ask! I think generally girls are really bad at describing themselves; they always undersell. They want to manage expectations and don’t want to over-promise. So if they were describing themselves, they weren’t doing a great job of it. What we found was that everyone’s got an amazing library of photographs that really showcase who they are. If you ask someone to describe themselves, they’re like, ‘uh… I’m tall…? I like.. technology?’ If you share the images, you can show how you live your life and you can easily get a sense of who someone is, and it’s like, ‘yeah, we could go on a date!’  Like, ‘oh, you’re into pop-up restaurants, me too!’  ‘Oh, you like playing sport at the weekend and squash, yeah, I love squash.’ It’s a much easier way to explain who you are, but it’s also an easier way to start a conversation, because you have all these little hooks that make it easier to get talking.”

If you’re having trouble saying hi to girls or aren’t really sure where to start, Dattch offers a game called “Would You Rather?,” which pits random girls against activities, cute animals or food (a daring twist on “Hot or Not”). Gotta tell you, it didn’t matter how appealing the girl seemed, I always chose her over things like “squid” or “going to the gym,” but it’s a rare bird who would triumph over this: 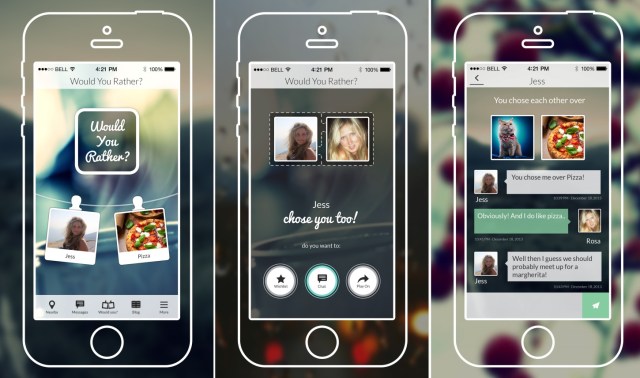 Please don’t make me choose between girls and pizza.

If you both choose each other over the competition, the app will notify both of you, which ought to prompt a mutually flattering conversation. Frankly, if a cute girl chose me over pizza, I’d be gobsmacked (and honored).

After having spent the last two weeks flipping through cute girls on Tinder only to be met with an endless and confusing barrage of cis men and straight women’s profiles, I was relieved to learn about Dattch’s dedication to keeping their app free of such infiltrators. As of press time, users must apply for a membership, and they are screened largely by their Facebook account — not just the gender listed on the applicant’s Facebook profile, but through a set of other characteristics that help Dattch establish that said applicant is a real live human being and not a troll. In cases where Facebook is not available or the applicant’s gender remains unclear, Dattch will go as far as to call the applicant to discuss; while they have met an alarming multitude of men this way, they are dedicated to creating a safe space for the women who use their service.

“[It’s] possibly our most controversial thing, but we’re gonna stick with it for the moment,” Exton said. “It was always one of my biggest problems on other sites — just every couple of weeks, getting a message from someone who was a guy, or someone where it’s like, I JUST DON’T THINK YOU’RE REAL. We’ve just done the verification from the outset, so we don’t have a history of people to go through — everyone has been verified, which means you don’t have to ask the question, you just know that it’s real people there.”

I asked if Exton felt that such a screening process would be possible as the app grows in popularity. “If someone is determined enough, they’re going to get through it — we can’t 100% guarantee that there will never be a fake account, but we’ll do everything in our power to make sure that there isn’t.”

The greatest thing about having an app solely for queer women is that it doesn’t need to just be for dating; girls who are just beginning to figure out their sexuality can explore through the app, and others have met and become friends. Exton explained that it will hopefully soon be possible to set one’s profile on “girlfriend mode,” which will allow users to meet each other and access the app’s blogs while explicitly communicating that they’re only there for friends. Dattch is designed to get women talking to each other in any context, and it feels much friendlier than its rivals. Anything that helps bring women together without pressure or expectations is certainly welcome, and the app’s flexibility allows it to do exactly that.

Dattch is now available in the iTunes app store in the U.S., and it officially launches in San Francisco today.  Currently, Dattch is only available in San Francisco, but will be rolling out in other US cities quite soon.  Its release in other cities will largely be contingent upon how many people download the app in specific cities; the goal is to hit a critical mass of 2,000 interested applicants before Dattch can be fully available in that area.  If you would like to see Dattch in your city, shoot them an email.  The idea is that as Dattch’s creators become more familiar with the different kinds of queer women in different American cities, they can tailor the app to meet those women’s interests.  It’s a pleasure to see technology being created with women’s needs being considered so carefully, and I look forwards to meeting the girl of my dreams, one who (maybe) likes me more than pizza.