A new analysis by the Williams Institute indicates that in the U.S., LGBT people experience disproportionately high levels of food insecurity and participation in the Supplemental Nutrition Assistance Program (aka SNAP or food stamps). This data complements other recent studies showing that the queer community experiences disproportionate amounts of poverty, homelessness and discrimination, and rarely do those combine without it also being difficult for people to access adequate nutrition.

The fact that LGBT people face higher levels of food insecurity is far from surprising, but this information comes at a critical moment. In early February, President Obama signed into law a new farm bill that will cut $8.7 billion from the SNAP program over the next ten years. These cuts will likely drive up food insecurity across the population, and since food insecurity especially affects queer people, impact queer people at a higher rate. This cut, combined with the cuts to unemployment insurance in January, mean that poor queer Americans risk  losing benefits that are critical for survival across the board. 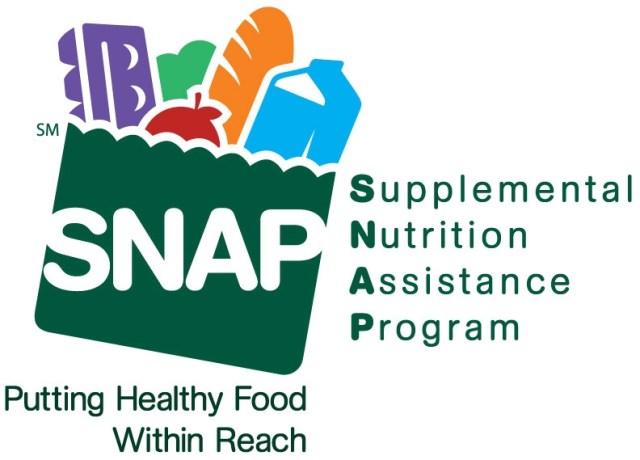 U.S. Department of Agriculture (USDA) classifies food insecurity by whether it satisfies several conditions, including households worrying whether their food would run out before they got money to buy more, not being able to afford to eat balanced meals, and people eating less than they feel they should. According to the analysis,

“An estimated 29% of LGBT individuals indicated that there was a time in the last year when they did not have enough money to feed themselves or their family, compared to 18% of non-LGBT individuals. This implies that more than 2.4 million LGBT adults in the US have experienced at least some aspect of food insecurity.”

Drawing from several studies, the Williams Institute traced distinctions along demographic lines within the LGBT population. 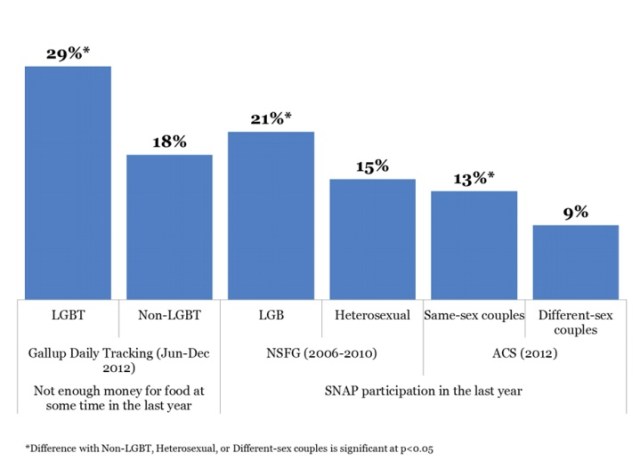 Food insecurity and SNAP participation, by survey and sexual orientation/couple type. via The Williams Insitute

Overall, LGBT adults and couples are 1.7 times as likely as non-LGBT identifying adults to experience food insecurity and receive food stamps. Along gender lines, 34% of LGBT-identified women reported not having enough money for food in the last year, compared to 24% of LGBT-identified men. Along racial lines, 37% of African-American LGBT adults, 55% of Native American LGBT adults, and 78% of Native Hawaiian LGBT adults reported experiencing food insecurity, compared to only 23% of white LGBT adults. This is consistent with other recent studies that have shown people living at the intersections of marginalized identities experience compounded barriers to survival.

The Williams Institute did not make a distinction between the prevalence of food insecurity in trans* population and the LGB population. It did, however, separate out people who self-identified as bisexual from the rest of the gay and lesbian community when looking at SNAP participation. The institute found that 25% of bisexual people reported receiving SNAP benefits, in contrast to 14% of the gay and lesbian population. It’s unclear why bi people consistently experience higher levels of food insecurity and poverty, but it may indicate the fact that a high percentage of the trans* population identifies as bi, so higher levels of poverty and discrimination faced by trans* people may be reflected in statistics about bi people. It’s also possible that increased reliance upon SNAP benefits has to do with the bisexual population’s greater incidence of mental illness and unhealth, which is correlated with and can perpetuate poverty. 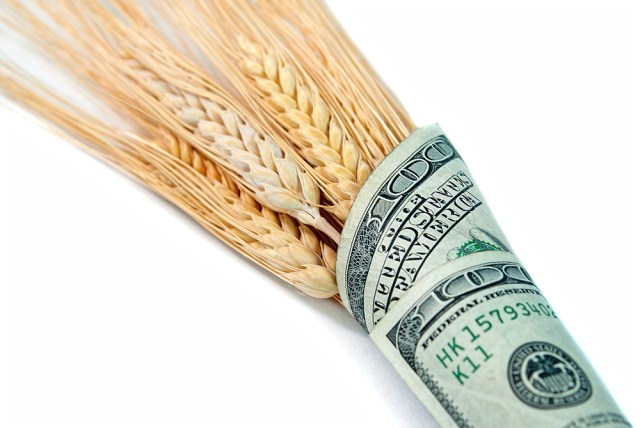 When we hear about legislation like the farm bill, we don’t and we won’t hear the mainstream media talking about queer people. But studies like this one show the implications of these bills and benefit cuts on specific communities, and illustrate why we need to be constantly working to make sure the magnified impact of poverty on queer people isn’t erased or silenced.