Last week I handed Drawn to Comics, the column I’ve been writing weekly, every week, for two and half years, to my best friend Heather. She wrote beautifully about Strangers in Paradise and the power of happy endings for queer characters. It was one of the few things last week that cheered me up. I’m trying to get back to my normal routines after the horrifying and unbearably tragic massacre in Orlando, but it’s hard. I’m struggling to move on and “just” write about comics. I’m struggling to write about anything other than Orlando. So I’m not going to, not really. I’m going to talk about how thankful I am for all the LGBTQ people who are making comics and telling stories and creating heroes and showing the rest of us that anything is possible. If you’re an LGBTQ person, whether you’re out to the whole world or only yourself, I am so thankful for you and the work that you do. 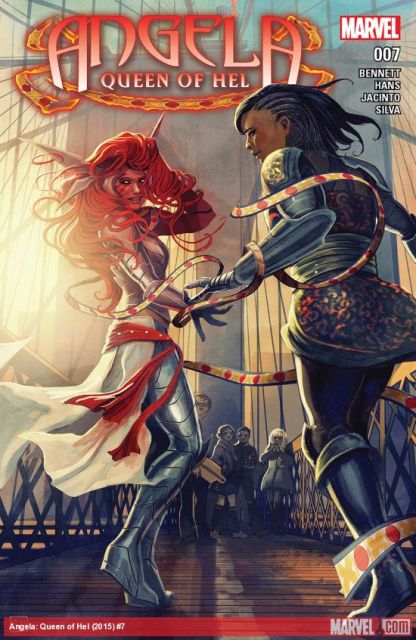 From Angela: Queen of Hel, written by Marguerite Bennett, cover by Stephanie Hans.

I’ve said this over and over again, but comics help us reach for the highest heights and see ourselves for who we really are. They help us dream and make goals and find common ground and love ourselves. A comic like Fun Home might be your first introduction to the concept of being butch. Lumberjanes might be the first place you see a trans girl of color. Patsy Walker AKA Hellcat might be the first time you see a character stand up for themselves and say that they’re bisexual out loud. Midnighter might have been the first time you saw a gay man kick ass. Creators like Kate Leth, Marguerite Bennett, Tamra Bonvillain, Brittney Williams, Steve Orlando, Phil Jimenez, Shannon Watters, Brooke Allen, Grace Ellis, Alison Bechdel, Sophie Campbell, Marc Andreyko, Kris Anka, Kevin Wada and Kieron Gillen are creating worlds and heroes and villains and people and they’re giving us hope when they do. They give us hope that our stories deserve to be told, that we deserve to be represented and that we can accomplish our dreams. And those are just some of the comics comics creators from some of the traditional publishers.

The internet, small presses, self-publishing and online fundraising have all helped queer creators thrive in the area of comics. Every year I make a list of queer women and non-binary people who make comics that you can support. Those lists are full of amazing, inspiring, talented and hardworking people who remind us every day that queer people deserve to have our stories told and that we deserve to have happy and fulfilled lives. People like Ariel Ries, Mags Visaggio, Janelle Asselin, Mildred Louis, Cameron Glavin, Anna Archie Bongiovanni, Yao Xiao, Megan Praz, Kylie Wu, Aatmaja Pandya, Cathy G. Johnson, Annie Mok, Blue Delliquanti, Molly Ostertag, Suzanne Walker, Christina Poag, Taneka Stotts, Ens Current, Joamette Gil, Chathi Chavers, Veronica Agarwal, Mira Ongchua, Hazel Newlevant, Melanie Gilman, Aliza Layne, Tillie Walden and Tyalor Robin all deserve our thanks, as do all of the LGBTQ people who make comics that I didn’t name here. 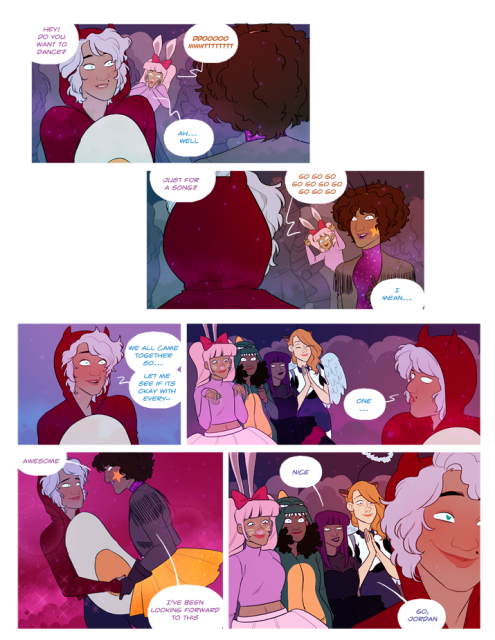 From Agents of the Realm by Mildred Louis.

When we see stories about us by cis, straight people, we usually see stories where we end up beaten, kicked out of our homes, insulted and murdered. But we don’t need to look to fiction for that; we get so much more than enough of that in our real lives and in our communities and in our families. I live for happy stories about queer people by queer people. That is my favorite thing in the world.

Even when the stories they write or illustrate or color or letter or edit or publish aren’t happy, they’re still important. So often as queer people we’re told that our lives are over once we come out. We’re going to be sad and alone and miserable and unsuccessful for the rest of our lives. But these creators are proving that that couldn’t be farther from the truth. They’re out there in the world creating. They’re out in the world accomplishing their goals and living their dreams.

Closeted or partially closeted LGBTQ people and LGBTQ people who feel invisible because they’re bisexual or for any other reason deserve the same amount of thanks. Your identity is just as valid and real as anyone else’s. You’re a part of this family. Thank you for the work you do. 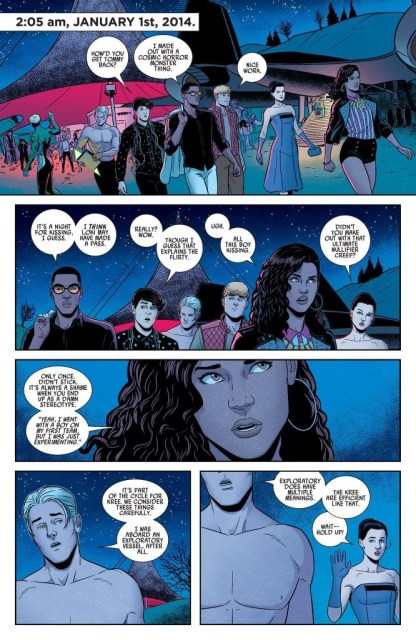 Of course, no one is perfect. I’m not saying we should deify these or any creators; they’re human beings, and that fact is one of the important things in all of this. I want to celebrate their humanity and recognize their humanness. They’re human beings and they’re helping to show those who would dehumanize us that they won’t win. As long as LGBTQ people are creating comics, I’m going to write about them here in Drawn to comics, and don’t worry, this column isn’t going anywhere. LGBTQ people in comics will always be here and we’ll always be vocal. We’ll always be telling stories and making art and publishing books and putting our work out there online even if no one will help us.

Bitch Planet #8 (y’all should really check out this one)

Over the Garden Wall Ongoing #3