I read a lot of monthly comics, you guys. My pull list is 30 books long, plus there are a few that I pick up in trades. Because of the many comics I read, my favorite comics often change from week to week. But for a while now, my top favorite books have been consistently the same. Now, the, in my opinion, Best Comic in the World right now is Bitch Planet, but for the past few months, my number two favorite comic has been Patsy Walker, AKA Hellcat.

Last year I said that Hellcat was the Marvel book I was second most looking forward to (after Squirrel Girl) and had my third favorite overall single issue of the year. This year, the book unbelievably got even better. You guys, this is the best superhero comic of 2016, and it’s one of the best of the past five years. It’s been one of my two favorite comics (along with Bitch Planet) for most of the year, and I don’t see that changing any time soon. The first six issues of the series follow Patsy as she starts a temp agency for superpowered people, gets an apartment with the bisexual telekinetic Ian Soo, hangs out with her BFF She-Hulk, fights a ragtag group of supervillains put together by the Asgardian enchantress Casiolena and tries to retain the rights to the comics her mom wrote based on her teen years from her old frenemy Hedy Wolfe. It’s super wonderful. 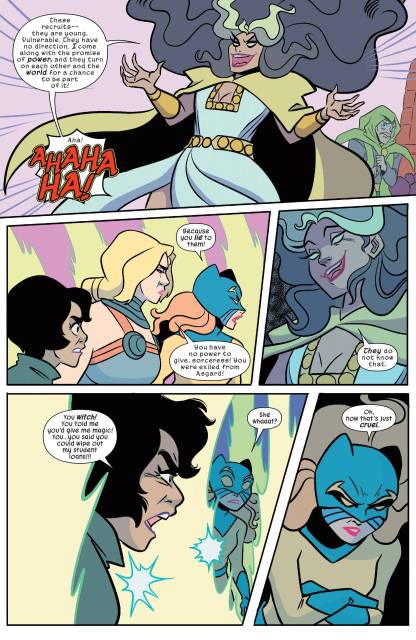 click to enlarge. Art by Brittney Williams and Megan Wilson.

The writing, by Kate Leth, is so freaking terrific. It’s funny and full of emotion and spunky and it really taps into the great adventuring soul of the comics we used to love reading as kids and teenagers. Reading Hellcat feels like being your ideal 14 year old self and going on a super fun adventure with your amazing group of friends during summer vacation. There are twists and turns, there’s excitement and moments where it gets surprisingly deep, there are wondrous sights and there are plenty of terrific jokes and terrible but great puns.

And the art! The art! It’s so freaking good. Brittney Williams is killing it. She draws faces, hair and outfits better than just about anyone in mainstream comics. And Megan Wilson‘s colors just make everything pop so perfectly! Williams and Wilson are my favorite art team in comics right now. Williams is great at drawing fight scenes, crowd scenes, facial expressions while characters are chatting or laying out their evil plans or looking at books full of butts and just about everything else you might want someone to draw. I want to live in the world that she draws. 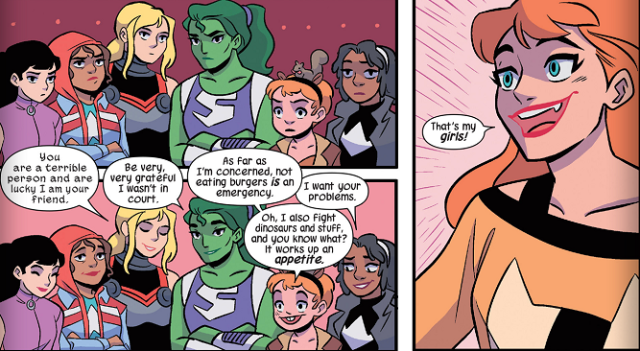 Look, it’s 7 of my 15 favorite Marvel heroes all on one page! Art by Brittney Williams and Megan Wilson.

I feel like Leth and Williams are better at creating a wide cast of characters than anyone I’ve ever seen in comics before. They make every character, every setting and every page of the comic interesting and enthralling. I’m drawn in by Patsy and Ian helping a woman get her lost Broadway tickets back; I’m obsessed with Bailey, a girl who wears a super darling capelet and has purse-based superpowers; I love watching Patsy get a Hellcat tattoo; I could just look at She-Hulk or Valkyrie be all giant and buff (Williams draws them the way they were meant to be drawn) all day long. And it’s not just the little moments, seeing how Patsy takes down her seemingly much more powerful foe is ridiculously fun and exciting and is classic comic book action. 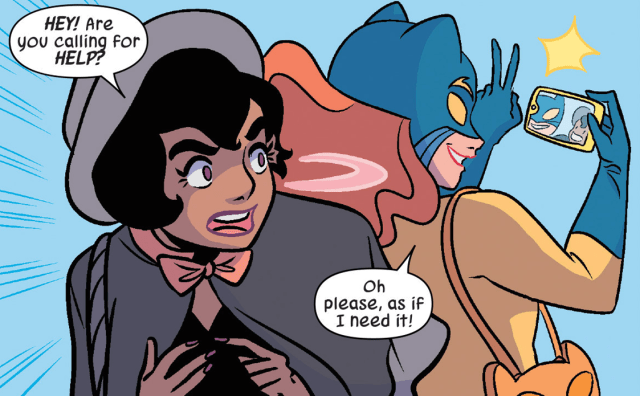 Another great thing is that many of the characters in Hellcat, like Leth and Williams themselves, are queer. And they are very openly and clearly queer. They flirt, they talk about their love lives, they read gay erotica, they’re well rounded, they’re like real queer people. This cast is just full of queer characters. America Chavez showed up for an issue, Valkyrie was there for a few, Sharon King was there in Issue #1 and of course there are the regulars Ian and Tom. If you loved the queernormativity of Gillen and McKelvie’s Young Avengers or Marguerite Bennett’s run on the several Angela titles or DC Comics Bombshells, you’ll float away on a gay cloud nine while reading Hellcat. One of the main settings is a gay bookstore, another is the apartment shared by Patsy and her bisexual roommate, around half of the main characters at any given moment are queer, everyone dresses like all my queer friends, they make Hamilton jokes and references to things that my queer friends and I talk about, it’s terrific. This is the kind of representation I love, the kind that feels comfortable and like home, not the kind that feels sterile and touristy. 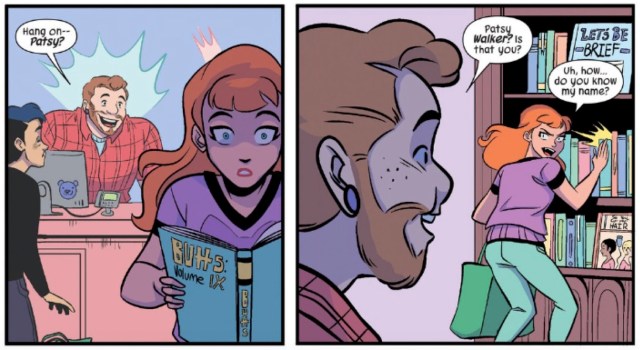 I wish Marvel was putting out a dozen more books like this, I wish that the creative team was being handed the keys to whatever other titles they dreamed about working on, I wish I could buy some Hellcat merch. Like seriously, you have no idea how fast I’d buy a Patsy Funko Pop or really anything else. Until then, I’ll just be over here buying every single issue and telling all my friends to do the same (please, everyone, buy this comic right now). The first trade paperback, Hooked on a Feline, was recently released and collects the first 6 issues, including one with terrifically great guest art by Natasha Allegri.