There are few things that I’m more obsessed with than good representation in media for trans women. I’m desperate for it, I seek it out wherever I can find it, and when I do, I try to spread it as far as I can. As my next installment of that spreading, I’m going to be talking about Kim & Kim, a punk-rock sci-fi bounty hunting adventure starring two awesome women. I know, I know; it already sounds awesome, how could it get even better? One of the Kims (Kim Q) and the writer, Magdalene Visaggio, are trans women, and they’re both really cool.

I’ve read the first issue, which comes out in stores in July, and it is fun, queer and hectic as hell. It throws in pieces of Cowboy Bebop, Tank Girl and grrrl punk and mixes them in a totally new way that draws you in instantly and doesn’t let go. It has the youthfulness of Runaways, but with a little more edge, and the strong queer characters of something written by Marguerite Bennett, and anyone who likes anything that I’ve mentioned will fall instantly in love with this. I interviewed writer Magdalene Visaggio about her new comic from Black Mask and what she, as a trans writer, hopes trans readers will get out of her comic. 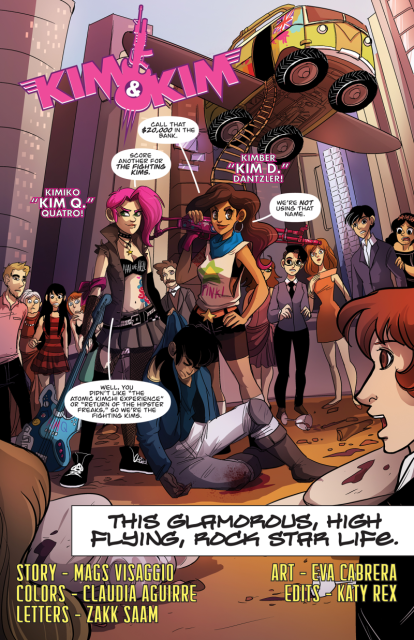 Mey: This is your first work in published comics; what were some of the things that inspired you to write Kim & Kim, whether it’s other comics or something you wanted to contribute to the medium? You just have such a specific world that you’ve created and I’d love to know how you thought it up.

Mags: I wish I could point to a core idea or goal behind Kim & Kim, but really its more an impulse and a decision to do something brazenly fun that doesn’t have a dark sensibility. In a lot of ways, Kim & Kim is a writing exercise for me in getting past the Big Concept. I tend to get really caught up in overarching ideas and big heady themes that intimidate me to the point of paralysis; Kim & Kim’s themes emerged naturally over time instead of being something I set out to accomplish.

The major things that inspired Kim & Kim were books like Squirrel Girl, Mark Waid and Chris Samnees run on Daredevil, which returned the character to his swashbuckling ways after over a decade as the Job of the Marvel universe, and the current run of Silver Surfer by Dan Slott and Mike Allred, alongside shows including Broad City, Cowboy Bebop, and FLCL. It’s kind of got the throwing-a-bunch-of-crap-into-a-pot-until-it-tastes-good approach to writing. And the thing is, I spent so much time writing really relentlessly grim comics. I was super into grimdark when I was in college, so invested in the gritty brutal realism and moral complexity of shows like Battlestar Galactica. I wanted to get away from that; I mean, I have darker books in development, but nothing as frustratingly dour as that. The book also has some serious, serious influences in terms of character and voice from Imogen Binnie’s phenomenal Nevada, although Kim & Kim is about a billion times less intelligent. It also plays with my fascination with subcultures, specifically rock subcultures and the punk aesthetic.

Mey: How did you come up with these two characters? They play so well off of each other and I’d love to find out how you built that relationship.

Mags: I didn’t have a dynamic in mind when I started, although I mean the crazy one/sensible one structure is pretty sound and has endured for a reason. The original character sketches I wrote out for the Kims don’t really resemble the characters who they turned out to be; originally they were going to be much more damaged human beings. Kim Q was originally very prickly, very dejected, very cynical, and kind of mean, where Kim D was originally much more of a rebel for the sake of rebellion. Their personalities really started emerging as I wrote and I developed a clearer idea of what I wanted the book to feel like. There was never a moment where I decided this is the kind of person Kim D is, or this is their dynamic. They just kind of came alive on the page in a way I didn’t really anticipate.

I mentioned Broad City above, and in really broad (natch) strokes, Kim Q is Ilana and Kim D is Abbi – but these aren’t really clear parallels. Broad City inspired their bickering affection and their aimlessness, and helped me get a much clearer sense of how that aimlessness would play out in a stressful setting; originally the first issue ended with a giant fight scene. But it never felt right. So I cut it, and I found my girls here just smoking out on their van and bitching about their friends. The primary motivator for the Kims is stress and desperation, and in really broad strokes, Kim Q is very nonchalant about stressful things and Kim D is the one who has a fire lit under her ass to get shit sorted. So mainly what she does is she points Kim Q in the right direction and Kim Q ends up breaking things in a productive manner, more or less. At least that’s how they hope it goes. More often than not, though, Kim D loses her motivation halfway through a task or Kim Q breaks all the wrong things and they end up worse off than before, which just gives them another hole to climb out of. But that’s who they are. They’re climbers.

Mey:  What specifically do you hope trans readers will get out of reading this comic?

Mags: Hopefully the same thing I got out of it while writing it: that your shit is worth working out. That you get to have a future. That, hard as it can be to remember sometimes and as all-consuming as it can feel, this isn’t the only thing about you. Kim & Kim was part of my own acceptance process, and one of the biggest things I needed to deal with was that sense of well, okay, there’s another side. There’s an end goal beyond being a woman, and that’s having a life and being a functional human being with like, friends and magazine subscriptions and charges of tax evasion or whatever. I wanted to get into the headspace of a trans woman who wasn’t defined by being trans the way I still feel defined by being trans. Because like, the point with Kim Q’s transness is that it’s just a part of her. She’s trans, that’s a thing you need to know to really get her, but its not something that’s always super relevant to conversations she’s having or shit she’s up to. She’s trans. She’s queer. But she’s got all this other stuff going on, and at the end of the day, that’s what I wanted to communicate to my trans brothers and sisters out there. It’s worth figuring out your shit because when all is said and done, you can go right back to being a real person – just so much more of one than you had been before.

Mey: I feel like the writing, art and colors and even the lettering really come together super well to create a great punk rock futuristic world and feeling that permeates the entire comic. What was it like working with Claudia Aguirre, Zakk Saam and Eva Cabrera?

Mags: I’ll start with Zakk because letterers don’t get enough credit. Zakk is a workhorse who really makes sure he understands your book and your goals, and then letters it in a way that reinforces that. It’s not just bare lettering; he supports the comic in this really huge way. He went out of his way to develop a fantastic style guide for the book including some really interesting creative choices that, sadly, most people will totally ignore because good lettering is invisible. Zakk is amazing and I love him and his work. Eva and Claudia have this very, very deep collaboration with me and editor Katy Rex. I have to put this out there right at the outset: we’re all super close friends and that makes working together actually really fun and fulfilling and affirming, because were constantly rooting for one another. Eva and Claudia are supremely talented at capturing the mood I’m after in ways I never anticipated, and they love the Kims as much as I do; it comes out in the work they do to give each Kim a unique aesthetic, a unique visual personality that has done a lot to inform my own ongoing conversation with these characters as a writer.

Mey: Is there anything else you’d like to say to readers or potential readers?

Mags: We live in an extraordinary time in comics, when a weird-ass queer book like Kim & Kim can find a publisher in the mainstream mass market comics market instead of being relegated to the underground press. That’s amazing, and it’s so worth reflecting on. The market right now is in the really intense churn as publishers are reaching after new, different audiences in fits and starts, because its worth doing and it needs to do it to grow. Comics are still dominated by science fiction and fantasy (and there’re a lot of reasons for that) but the growth of the medium, its increasing maturity over the last decade or so, is really fascinating. I have been blown away by the response to this book by the legions of queer women, cis and trans alike, who have really embraced Kim & Kim’s wannabe punk craziness because they’re thrilled to see any books that take them and their experience seriously. I really hope we’re able to keep this momentum moving and see a greater and greater share of comic properties and comic creators who can help communicate to people like us. There are maybe three or four trans women working in mainstream comics, counting myself. That’s a serious poverty of perspective, and if Kim & Kim does well, maybe we can count on publishers giving more opportunities to our community.

Harley Quinn and Her Gang of Harleys #3