Let me take you on a journey way back in time, to an extended-stay hotel in midtown Manhattan, June 2009. Autostraddle had just gotten born, much like many of our interns, who’d be arriving a few days later to “attend” Rodeo Disco, our first-ever Pride Party. Our Business Director, who was living in Miami at the time, had flown out and rented the apartment-style room, and I’d been summoned that afternoon to discuss a rather heated and clearly unreasonable e-mail argument with our Music Editor Stef that I’d been engaging in for the entirety of the day. The topic was the understandably controversial matter of how our 13 interns would be spending their days and nights upon arrival, if we were really gonna make any money from this party, when we’d be delivering their gift bags, and if it made sense to call the gift bags and schedules “Tyra Mail.” Everything was just so much.

Aforementioned Business Director offered me some advice: “Here, take a Xanax.” I’d never taken a Xanax before — after all, I didn’t have a prescription, and I’m nothing if not a law-abiding citizen — but I was feeling pretty wild that day and was up for anything. Who am I but one woman with only one life to live and way too many emails to write and then regret shortly thereafter. So I took a Xanax and within ten minutes found myself not only ignoring my laptop, but absolutely RECLINING in a chair that truly could’ve gone either way. “We should definitely flyer at the Dyke March, everything’s fine,” I trilled moments later before strolling off to the therapy session I suddenly barely even needed. Just like that I’d been transformed from a raving lunatic into a human being who cared about literally not one thing! 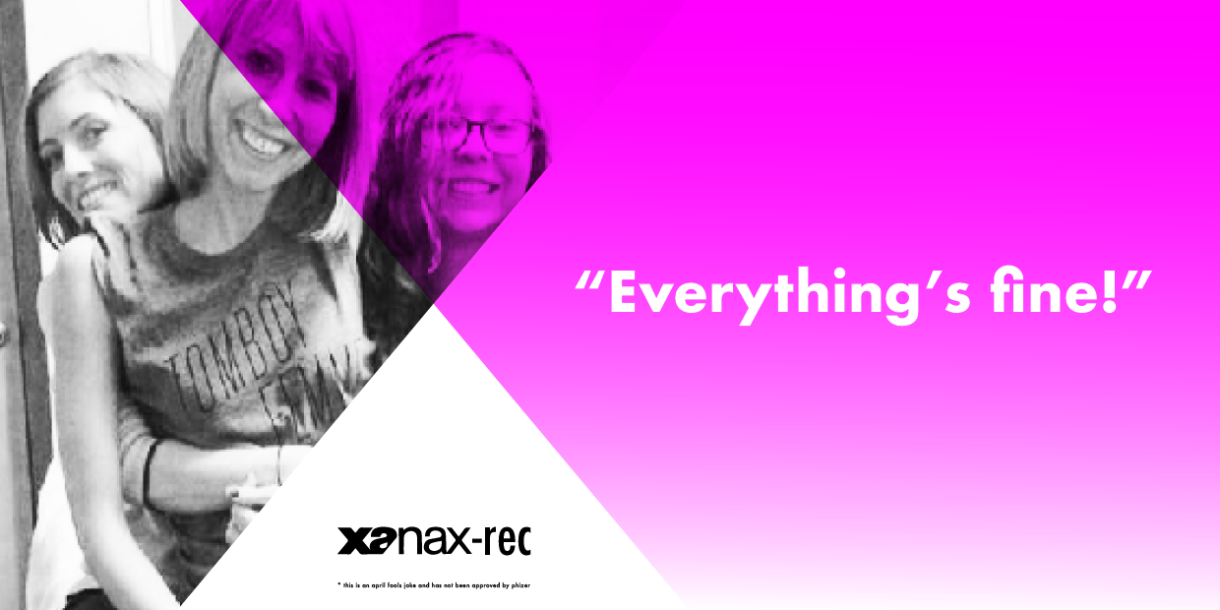 A quick Google search for “Xanax” on autostraddle.com turns up 491 results — that probably represents at least 25 times we’ve mentioned a brand name product for free! Arguably, there is no product we have problematically endorsed with more consistency than Xanax. 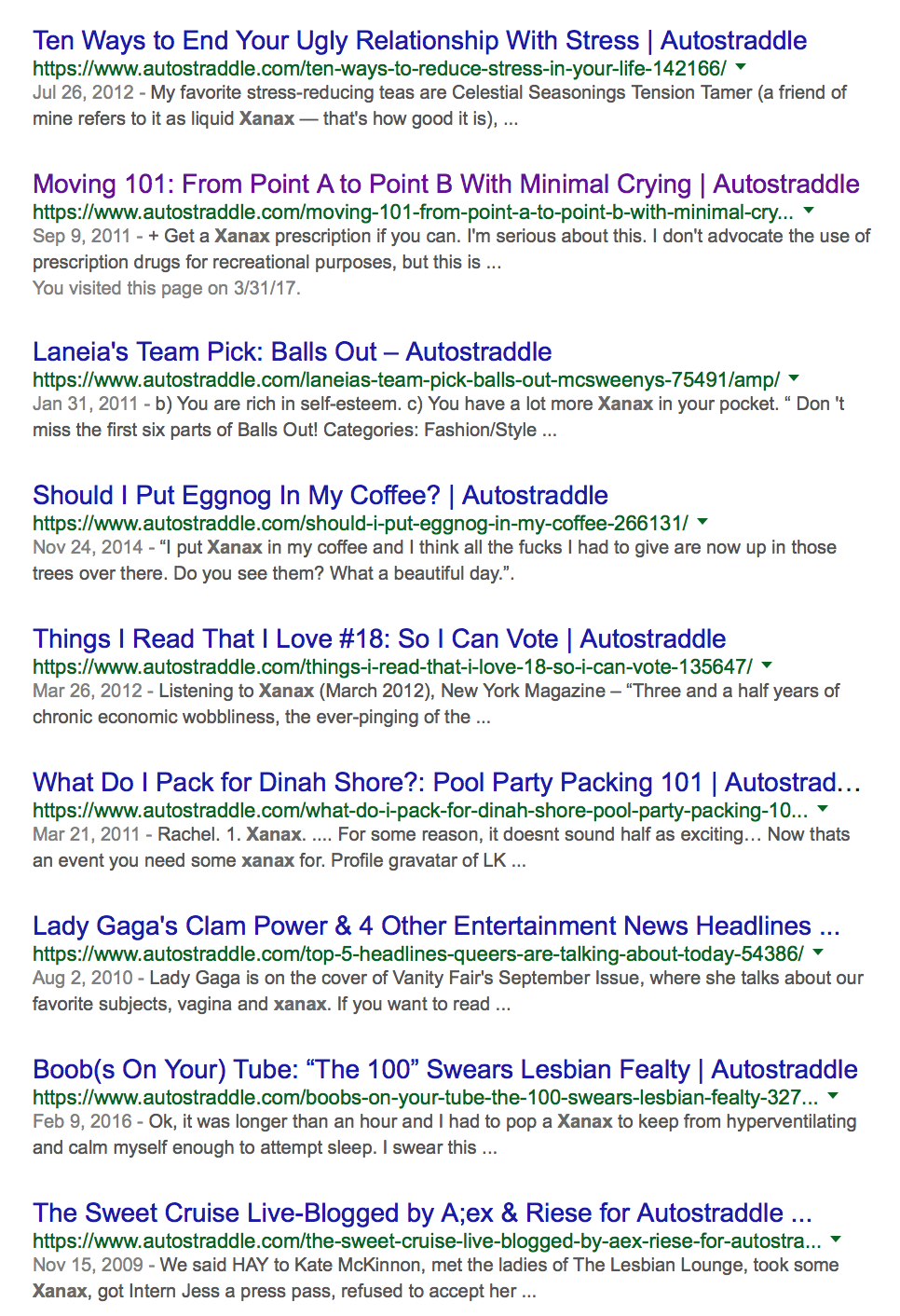 For that reason and so many others, we are so excited to announce that we have entered into a prosperous partnership with Xanax Recreational, a new kind of Xanax that is exactly like the old Xanax, except you don’t need an actual diagnosis or prescription to get it! All you need to do is call 1-800-AUTOXANAX and an intern will deliver a fresh bottle directly to your doorstep, with a wink and a smile. (The interns have mostly just been hanging out in the park since that party, except for the one who’s in law school and the one who vanished off the face of the earth instead of turning in the Comment Awards.) 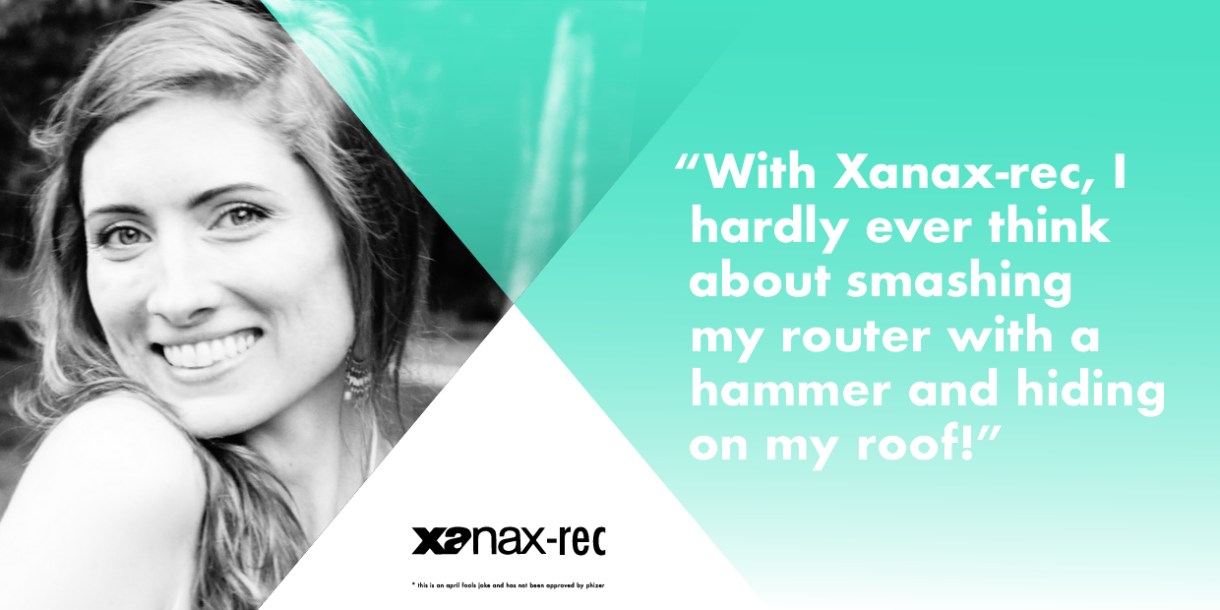 It’s a great way to meet girls, chill out, and support Autostraddle at the same time! Xanax-Rec is giving us a 20% kickback on every sale.

The campaign is called “Don’t Text Your Ex, Take a Xanax!”, reflecting the fact that many queer women struggle with self-defeating communication issues. 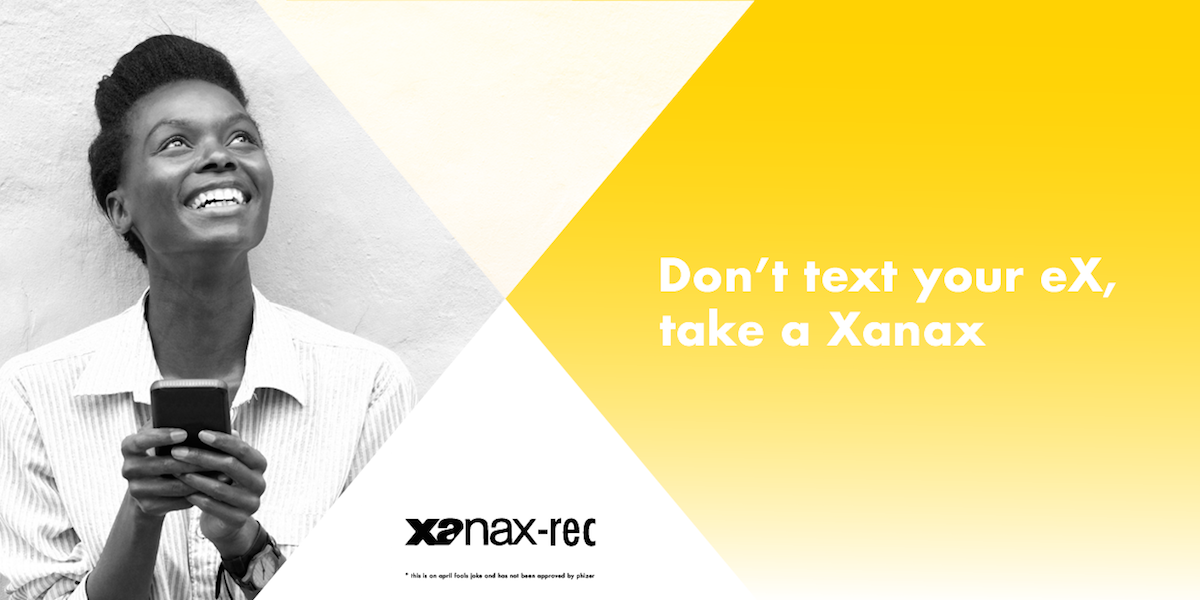 It also speaks to Xanax-rec’s true desire to connect with this underserved and very stressed out market. In the face of so much marginalization and oppression, can’t a girl get a time out?

The next time your parents, who voted for Trump and don’t understand why you’re yelling at them for taking an Uber from the airport instead of a Lyft, tell you to take a chill pill, you can literally take a chill pill.

The next time you’re stressing out about how to impress that femme by playing pool but you don’t actually know how to play pool, take a Xanax-rec and sit in a chair instead, looking hot while keeping cool!

The next time you feel the urge to text that girl to make sure the text you sent earlier wasn’t “too much,” just take a Xanax-rec and watch Sleepless in Seattle instead!

The next time you run out of Kate McKinnon videos on YouTube, just take a Xanax-rec and watch them again! 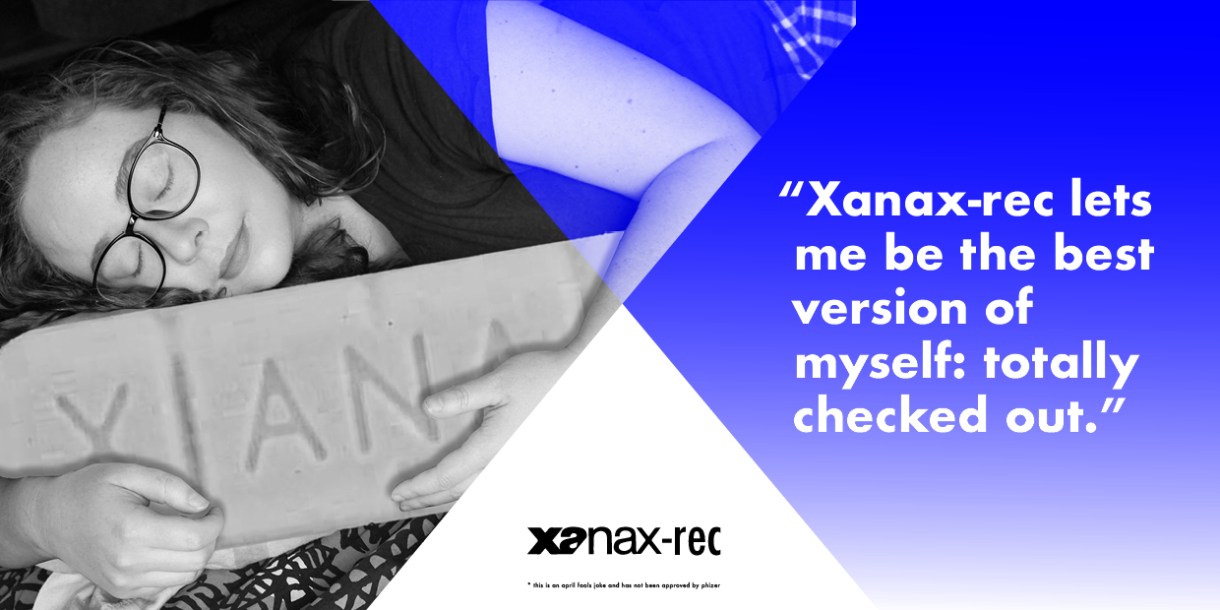 As you know, we’ve struggled for a while to attract advertisers to Autostraddle, due to sexism, homophobia, transphobia, the perception of queer women as “poor” and the fact that we write articles on topics including but certainly not limited to buttsex and getting a clove of garlic stuck in your vagina. But just like how little we care about stuff after taking a Xanax-Rec, they don’t care about that or really anything. We finally found our very own advertising match made in heaven, and summarily we’re on track to make more money from advertising this year than we did in 2014-2016 combined!

“You know,” your Mom told me when I told her about this ad campaign, “this reminds me of when doctors were over-prescribing valium to housewives in the ’50s so they wouldn’t have to think about how unhappy they were or become feminists. It’s kinda fucked up that you’re doing this, especially now.” 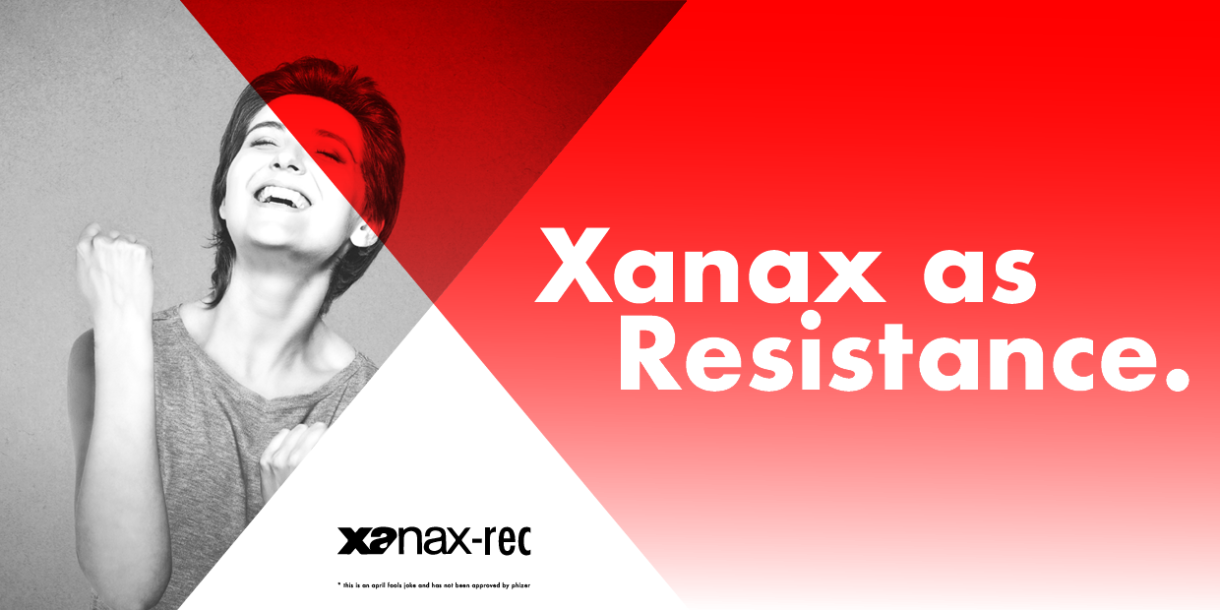 In addition to Phizer supplying all our Senior Editors, most of whom are already on at least one psychiatric medication (I’m on two!), with a lifetime supply of Xanax-rec, we will be running an aggressive display ad campaign, complete with pop-up ads that will leap from the page directly into your soul on every post about climate change or the Trump administration.

You can also look forward to a series of sponsored posts that will exploit surface-level diversity with seemingly effortless in-group cultural references in hopes of manipulating an underserved community into associating corporation with self-affirming and authentic emotions. 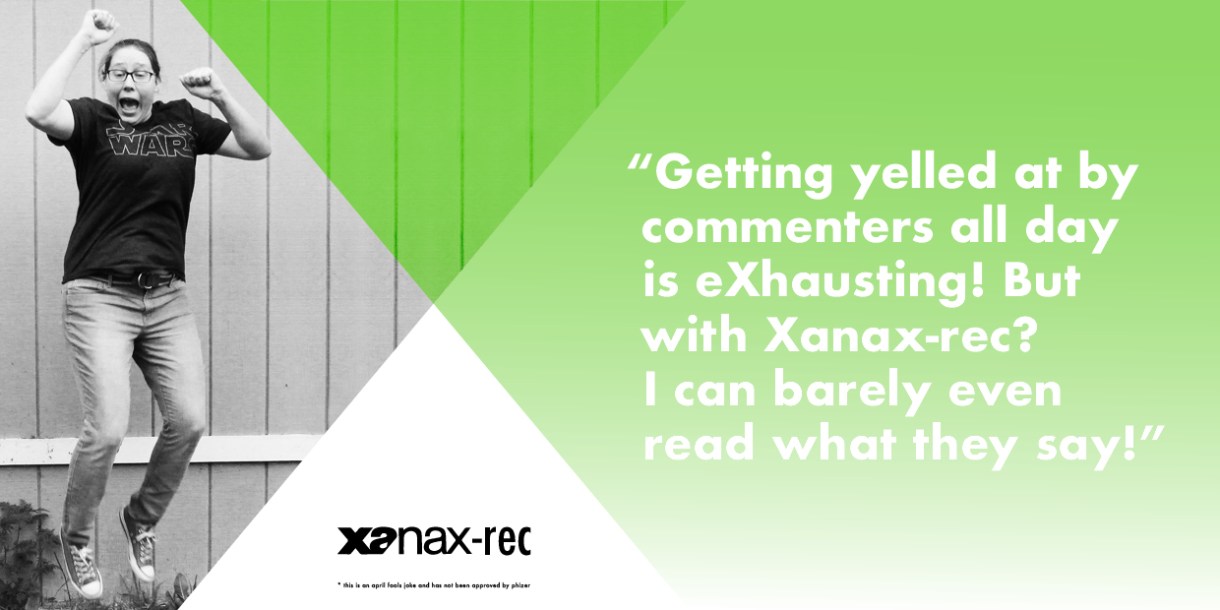 The best news of all? Those of you who are prescribed Xanax because you actually need it to function will no longer have to suffer through ten minutes of small talk with friends you haven’t heard from in forever who really should just cut to the chase if all they want to know is if you can spare a Xanax. (Very rude, friends!) 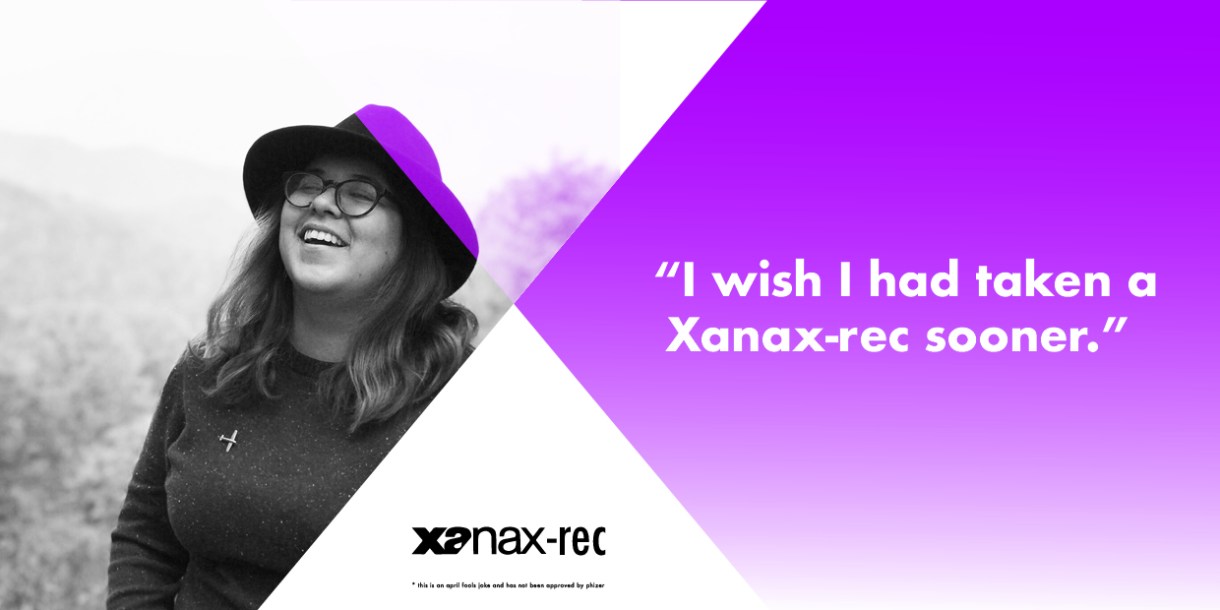 The first 100 orders of xanax-rec come with a free sticker! 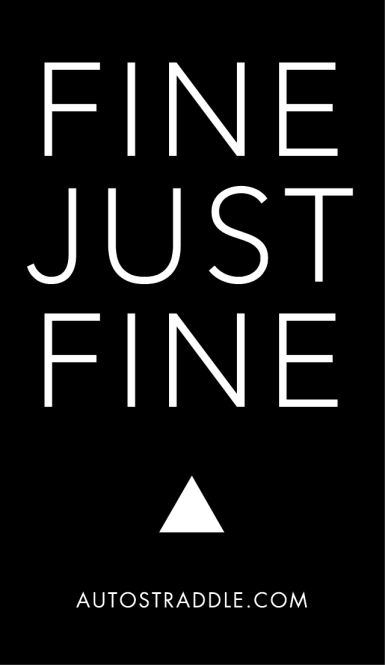 Join A+
Related:april fools day or whatever