Hello May flowers! This is the Thursday news fix; its time has come.

So Many Presidential Hopefuls, So Little Time

+ On Tuesday, Hillary spoke on her immigration stance, an issue important both to the election and the lives of many, many people. At Colorlines, Aura Bogado suggests some things we should keep in mind regarding Hillary’s policies. Hillary shared her planned approach to immigration policy, declaring that she supports the executive actions Obama has already taken and wants to go further, creating a “full and equal path to citizenship.” Although the GOP is trying hard to court the Latin@ vote, it doesn’t seem like any Republican candidate’s immigration platform is a real competitor for Hillary’s; despite a controversial record on immigration that has earned her criticism from advocates over the years, it appears that her newly left-leaning policies are putting pressure on other candidates. Hillary has also begun courting donors for a SuperPAC, a first for a Dem. She’s having a big week.

+ We have already discussed the fact that Bernie Sanders is running as an alternative option to Democratic candidate Hillary Rodham-Clinton. In this piece, Bill Curry attempts to persuade you that his candidacy matters regardless of his ability to actually be elected. Do you buy it? That’s up to you! 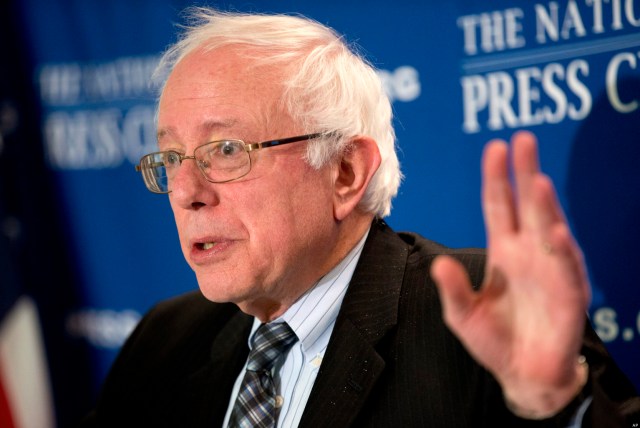 Sen. Bernie Sanders, I-Vt. gestures as he speaks about the fiscal cliff during a news conference at the National Press Club in Washington, Wednesday, Dec. 5, 2012. (AP Photo/Jacquelyn Martin)

+ I believe Jim Newell is going to be Salon’s primary 2016 election cycle cruise captain, and this is his take on why Rubio is a dumb-dumb that you don’t need to take that seriously.

Not the Band Police

+ The city of Baltimore has officially asked the Justice Department to investigate its police practices.

+ We’ve mentioned previously in this column the police torture reparations legislation passed in Chicago, which grants financial reparations and counseling in response to the grave history of police violence and torture in Chicago. Vice has the story on how police violence will be taught in schools in connection with the Bill of Rights, and how challenging that project is.

“The big obstacle here is teachers aren’t trained to confront these kinds of issues, and they’re uncomfortable doing so,” said Maureen Costello, director of Teaching Tolerance at the Southern Poverty Law Center (SPLC). On top of this, when it comes to civil rights education, Costello said, “There is no uniformity whatsoever and virtually no accountability. Nationally, standards vary from state to state.”

+ Brendon Glenn, age 29, is confirmed dead as a result of a police shooting in LA’s Venice Beach.

“Whatever reason that they had to shoot him, I don’t think it was justified because he wasn’t a confrontational human being by any means,” local resident Henry Geller said. “He was definitely like a peacemaker.”

Glenn was a regular [at] the Teen Project’s the P.A.D., a Venice support center for homeless youth, according to Timothy Pardue, who runs the center. Glenn, who had recently moved to the area from New York, had come to a support group meeting on Tuesday night, Pardue said.

“He was crying and he was even saying he wanted his mom, and he just said his mom didn’t want him back home,” Pardue said. “He struggled with a lot of things.”

+ Dorian Johnson, a primary witness in the investigation of Michael Brown’s death who stated that he saw Brown trying to surrender with his hands up when he was killed, has been arrested on suspicion of drug possession and resisting arrest.

+ You may have heard about the injury and arrest of UVA student Martese Johnson back in March; although Johnson was arrested on charges of public intoxication, but police reports now suggest that officers knew Johnson wasn’t drunk, and merely suspected he had a fake ID. Other accounts have supported that while Johnson may not have been of age, his ID wasn’t fake. 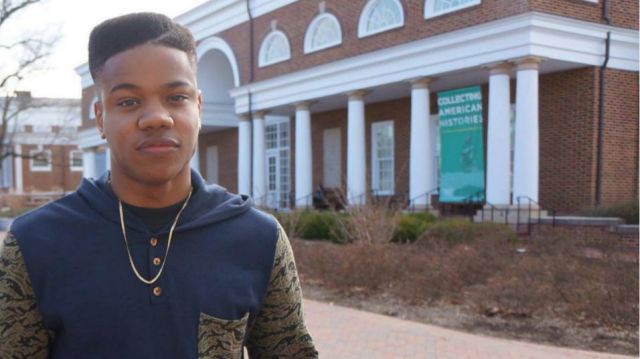 + This article could really have been put into a number of sections in this fix, it really touches on a lot of issues from local policy to national elections to political writing and more. But I’m putting it here because I want everyone to read it, not just people who are disproportionately interested in the pre-media of the 2016 election or full-time wonks. Just, this is about writing on Hillary’s speech a few weeks ago and also Antonio Morgan, one man in St. Louis County and the world we live in now, and if I could pick one thing for you to read out of all of what I’m going to link here, this might be it.

+ There’s a lot going on in Texas! There are many, many pieces of legislation up for consideration there, perhaps most notably anti-LGBT and anti-abortion measures. Jenny Kutner at Salon has a roundup of all of the anti-woman and anti-gay bills considered this session, and they’re doozies. Excellent Texas-based writer Andrea Grimes discussed the anti-abortion bills previously at RH Reality Check. Here’s a more in-depth profile of the effects of the anti-gay measure on Beau Miller, the gay son of a Texas legislator.

+ Elsewhere but in sort of related news, a new legal test of religious freedom laws: a chapter of the Satanic Temple in Missouri is arguing that the state’s mandated 72-hour waiting period for abortions violates their religious freedom, because their faith places a strong emphasis on bodily autonomy.

The St. Louis chapter of the Satanic Temple says they were recently contacted by a Satanist woman, whom they identify only as “Mary,” who is struggling to navigate Missouri’s harsh abortion laws as she attempts to end a pregnancy. She lives hundreds of miles away from the state’s only abortion clinic, and she doesn’t have the means to make the trip twice in order to comply with the state’s mandatory counseling and 72-hour waiting requirements. So her religious leaders are stepping in on her behalf. Satanic Temple leaders set up a crowdfunding site to raise money to help Mary cover the expenses associated with her abortion procedure. And they’re also arguing that, based on their community’s religious tenets — which stipulate that “one’s body is inviolable, subject to one’s own will alone” and “we should take care never to distort scientific facts to fit our beliefs” — Mary should be able to get a faith-based exemption to the state’s 72-hour waiting period.

+ Likely you have heard by now about the Nebraska woman suing every homosexual on earth. That is a real thing. Unfortunately I do not have much to tell you that will shed light on the situation. She’s representing herself, and she wants U.S. District Judge John M. Gerrard to rule on whether homosexuality is a sin. You can read her legal petition. Dan Savage has already indicated he is willing to take the stand as part of the homosexual side of the case. It seems doubtful that this case is going to lead to any meaningful legal precedents regarding the sinfulness of homosexuality, as the petition does not appear to be organized very well, does not actually summon any defendants, etc.

+ David Caplin and Anthony Barnaby were accused of killing lesbian couple Brenda Warner and Charlene Ranstrom in 1988; since then, they’ve been tried multiple times, but each trial resulted in a hung jury. The case was resurrected in 2011 after evidence was sent for DNA analysis; this week, Caplin was extradited from Canada in order to retry the case; Barnaby is also charged but has not returned from Canada yet.

+ Angeline Jackson, director of Jamaica’s only organization for lesbians and bisexual women, speaks out about corrective rape in her community.

+ Last week it was publicized that Samaria Rice, mother of 12-year-old Tamir Rice who was shot to death by Cleveland police officer Timothy Loehmann, has become homeless after moving out of her house because she couldn’t stand to live right next to where her son was killed. Ferguson Response has instructions on how to donate to the family’s estate directly through their attorneys. Activist Feminista Jones has been organizing an Amazon wishlist for the family; at press time all of the items on it had already been purchased, but it may be worth keeping an eye on in case it’s updated again later. 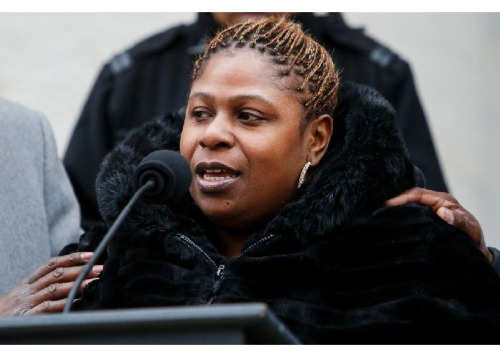 + Also in mother news, Nan-Hui Jo, mother of a young daughter and undocumented survivor of domestic violence, has been detained and likely faces deportation while in the meantime, her daughter is in the custody of her abuser. Feministing has a list of ways you can help:

Ending domestic violence means ending state violence against domestic violence survivors. You can stand with Nan-Hui by 1) signing this petition for her release, 2) donating to her legal defense fund, 3) writing her a letter, and 4) calling on ICE to demand her release from custody.

Out of principle, Familia:TQLM Steering Committee members made a choice to not attend the summit inside the White House today. At large, our base and community are undocumented LGBTQ folks, therefore, our commitment is to them and not to the state. Our organization’s collective work envisions a world in which LGBTQ immigrants are fully liberated. As we continue the fight for our communities we must constantly and intentionally uplift our members that are systemically left out of critical conversations that influence policies and that have a direct impact on our lives. We will continue to engage in grassroots organizing and strategies in order to demand #Not1More LGBTQ deportation and we encourage all our movement leaders to join us in our efforts.

+ New research finds that the Affordable Care Act is working pretty gosh-darn well as far as getting more people insured. Almost 17 million more people now have health insurance, with 80% seeing no change in the source of their coverage.