31-year-old featherweight boxer Orlando Cruz is well-decorated already. He’s got seven Puerto Rico National Titles, ten medals from various international tournaments, and some pretty sweet sleeves. He topped off his 178-win amateur career by representing the US in the Sydney Olympics, and since he went pro in 2000 he’s racked up a 18-2-1 record and nine knockouts – he has a chance at this year’s world title if he beats Jorge Pazos in a couple of weeks. It would be his second title this year: as of an announcement on Wednesday, Cruz is the first openly gay man in boxing history. 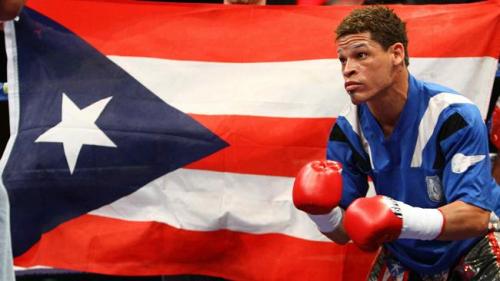 ORLANDO CRUZ GETS READY TO BEAT DOWN SOME STEREOTYPES

According to an interview he gave the LA Times, Cruz punched down the closet door in order to live more honestly. “I don’t want to hide any of my identities,” he said. “I’ve been fighting for more than 24 years and as I continue my ascendant career, I want to be true to myself . . . I have and will always be a proud Puerto Rican. I have always been and always will be a proud gay man.” He also wanted to shrug off what he describes as a “big distraction” (he believes it may have lost him some bouts) and “not carry this on and on with myself.” Positive responses from fans and the larger community have made him even more confident in his decision. “This will never bother me again,” he says now. “I feel comfortable with myself… I’m happy.” He wants to fight for marriage equality, which doesn’t exist in Puerto Rico right now, saying “the gay community should have the same rights as the heterosexual community, and I want to be part of that movement to make that happen here.” He also hopes to inspire the younger generation, and break down stereotypes: “I want kids who suffer from bullying to know that you can be whoever you want to be in life, including a professional boxer, that anything is possible and that who you are or whom you love should not be an impediment to achieving anything in life.”

It’s a banner day whenever anyone comes out. It’s great news for that person (and, whether they realize it immediately or not, for everyone close to that person), because they’re one step closer to building a life that truly fits. It’s great news for the gay community, because we get to broaden the circle, to add another face to the pantheon and another voice to that constant raucous dinner party that all the queers are having in my head all the time. And it’s a gift to the world in general, as it gives everyone the opportunity to open their minds just a sliver wider. I hope a lot of people go for it next week. 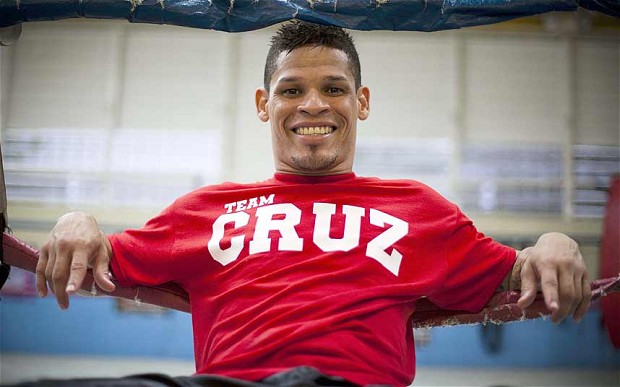 I AM PROUD TO BE ON TEAM CRUZ AS WELL

But the fact that he’s an athlete, particularly a male athlete in an individual fighting sport, makes Cruz’s decision courageous in a unique and unprecedented way. For one thing, his banner’s flying in a veritable desert. There has never been an openly gay player in Major League Baseball, the NFL, or the NBA. Only 0.16% of Olympians this year were out. The sports world at nearly every level, from the locker room to the board room, is a minefield for queer people – figureheads toss out slurs on the court, governing bodies act as gender police, homophobic coaches hang grimly on by their teeth, and “negative recruiting” persists in top university programs. Even as more and more players, fans, coaches and administrators speak out in favor of acceptance and equal rights, and even as athletic institutions begin to incorporate anti-discrimination policies and inclusion programs, the potential consequences of coming out often outweigh the pros. They fear losing sponsorships and the respect of their teammates and competitors. They’ve worked incredibly hard to build their careers, and, as out speed-skater Blake Skjellerup told Time Magazine this summer, “they wouldn’t want anything as trivial as their sexuality to jeopardize that.”

With all this in mind, it’s not surprising that so few professional athletes in general have come out. Then you add in the fact that boxing is considered, as sports columnist Michael Walters puts it, “one of, if not the most, macho sports,” and all of those barriers seem even more intimidating (Cy Ziegler of OutSports.com is more blunt: “No one should be more afraid of coming out than a professional boxer whose opponents’ goal is to knock him out cold.”). For a while, they were too high for Cruz, but like any great athlete, he decided to train through it, talking to psychologists and making sure he had the support of his family, trainer, manager and community. “I developed physically and mentally to take such a big step in my life and in my profession,” he explains, “knowing that it would have pros and cons, highs and lows in this sport that is so macho. I kept this hidden for many, many years.” 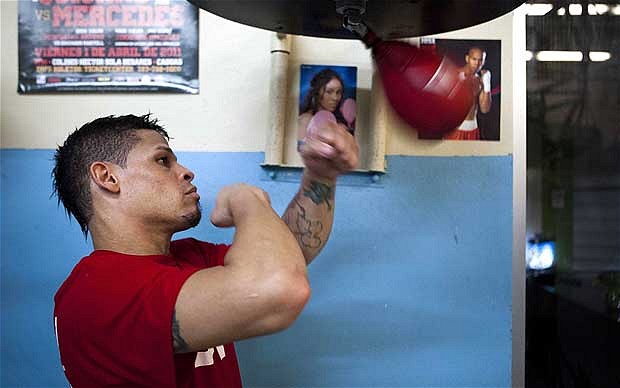 I WOULDN’T WANT TO BE THAT PUNCHING BAG

That he no longer feels like he has to is a testament to his hard work, and to the changing times. Only two other professional male boxers have come out, both after their careers ended – Emile Griffith in 2005, nearly 20 years after his retirement (and 44 years after he beat Benny Paret into a coma in the ring for calling him a maricón, another example of why you might not want to come out, in boxing), and Marc Leduc in 1994, one year after his. There have been very few openly gay pro wrestlers, and they’ve had it rough, sometimes tragically so. Take the story of Chris Kanyon, who tried to come out while wrestling for the WWE but never fully managed to because fans were so used to the company’s homophobic storylines that they thought it was a gimmick.

Even in women’s fighting sports, where participants are bucking traditional gender roles just by getting in the ring, very few athletes are openly gay. In a piece on women’s boxing for the New Yorker, Ariel Levy cites a “disproportionate number of gay women competing in boxing” but says that many remain closeted because they “fear the disapproval of coaches, fans, and other athletes.” Carrie Barry, a four-time national champion and out lesbian, told Levy about a conversation she had before a match with a fan who praised her for being “an amazing woman… not like these other bull dykes here, all brutish.” “I was so dumbstruck, I didn’t really clarify,” Barry recounts. “You know I’m gay? And I fought the worst I’ve ever fought.” Sometimes this intolerance leads to horrific violence, as when bisexual boxer Christy Martin came out in 2010 and her husband, who was also her trainer and manager, tried to kill her. Other times it’s subtler, as when USA Boxing head Hal Adonis asks his athletes to change their behavior for the sake of his sport’s “public image,” or potential sponsors tell out MMA fighter Liz Carmouche to “tone it down.” Even when things seem to be going well, it might be for the wrong reasons – Carmouche is pretty sure she hasn’t had a harder time because her sport’s disproportionately male athletes and audience “look at two women and think “lesbian action”… that’s attractive to them. Two men just doesn’t have that same appeal.” 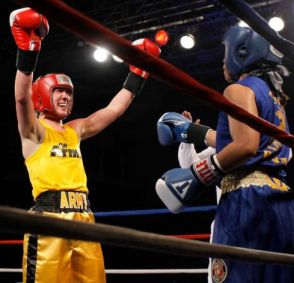 But every time someone comes out, it’s an opportunity to see if things have gotten even a little better. So far, Cruz’s announcement has brought him support from fans, the media, fellow out athletes and former athletes, the gay community, and the boxing community. After some fans expressed concern that homophobia might keep fellow boxers from wanting to fight Cruz, Dommys Delgado, president of the Boxing Commission of Puerto Rico, said they have no place in the sport: “those who don’t want to fight with him, well, don’t fight.” Any backlash so far has been relegated to the Twittersphere and to the repetitive cesspools that are most news website comment threads. Admittedly, it’s early – round one, you might say – but whatever Cruz faces in the coming weeks, and throughout his career, it’s heartening that so much of the world got immediately in his corner. It’s also great to have, as Cruz describes himself, “a warrior in the ring.” Now let’s all get back out there.