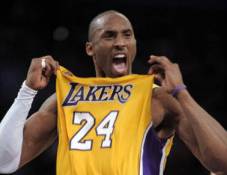 During Tuesday night’s Los Angeles Lakers vs. No One Cares Game, Kobe Bryant dropped the f-bomb. People were shocked. After receiving a technical foul (his 15th of the season), Bryant stormed to the bench and proceeded to throw one hell of a fit. He then yelled at the ref and dropped the aforementioned f-bomb. The camera caught this entire situation on tape, despite the fact there were still some basketball-related activities happening on the court at the same time that perhaps would be relevant to the interests of anyone watching a basketball game.

Now — I know what you’re thinking. It’s the NBA! People say the f-word all the time! But have you forgotten that there are KIDS watching this? It was on TNT, which definitely was my favorite channel as a child because they know drama. There were families in the stands and clearly the average NBA fan would be horrified to hear the f-word.

Not “fucking,” by the way. It’s “faggot” that people are mad about, which surprises me based on the general climate of America and most comments ever left on a YouTube video ever. Everyone who gave Kobe another chance after his sexual assault case was shaking their heads, “Fool me once, shame on you. Fool me twice, I’m calling GLAAD.”

Just hours after GLAAD demanded action from the NBA, Bryant was fined $100,000. He went on to apologize and say, “What I said (Tuesday) night should not be taken literally.”  That’s good to know. I was really worried he thought the ref was gay.

Kobe just thinks that giving a technical foul is a really gay thing to do. Which might be why he is appealing the fine.

Does the NBA deserve props for fining Bryant? Would they have taken action if the slur had not been caught on camera but reported?