David Pepper, a Canadian activist and organizer, began his country-wide, one-person awareness raising-trip, the North Star Triangle Project, yesterday. The project is a volunteer effort to mobilize the GLBT community to sponsor people being persecuted because of their sexual orientation or gender expression. 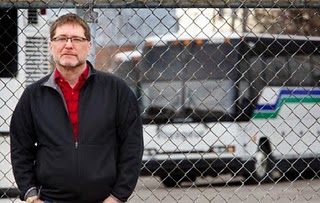 Starting in Winnipeg, Pepper will travel by bus to 14 Canadian cities, including Calgary, Edmonton, Saskatoon, and Lethbridge, with several stops in Ontario before finishing in Windsor by the end of April. He will also be going to British Columbia in May and to the East Coast in June. Along the way, he will be meeting with gay groups and individuals to discuss refugee issues and plans of action. In an interview with the Ottawa Citizen, Pepper said:

“I believe that there are gays and lesbians in every town in this country who want to do something for gay refugees in the rest of the world. If I can help link them up with resources locally, provincially or nationally in a way that helps them contribute with their own aspirations, that in itself will be a goal met.” 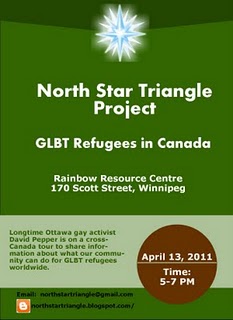 Janet Dench, the executive director for the Canadian Council for Refugees, sees the campaign as very important:

“It’s really important that more Canadians think about how they can contribute to giving a new home to someone facing persecution, including members of GLBT communities, who know what it’s like to suffer discrimination. I’m really hoping that it will speak to the imaginations of people across the country.”

Last June, Immigration Minister Jason Kenney urged individuals to use the Private Sponsorship of Refugees Program to support those seeking refugee status due to the treatment of gay people in their country of origin. The program uses private resources from communities, organizations, and groups of five Canadian citizens (or permanent residents) or more to provide financial and emotional support for refugees and sponsors an average of 3,500 people a year. Pepper began his first group of five shortly after Kenney’s statement, with the goal of sponsoring a specific woman from Colombia (her paperwork is still in process). And his speaking campaign grew from there.

Homosexuality is currently illegal in 77 countries and means a death penalty in five of them. Historically, Canada has not been the greatest at accepting gay refugees, frequently relying on outdated methods for determining sexual orientation. Last May, Yaser, a gay Iranian man was deported after the Immigration Refugee Board in Vancouver denied his claim because they didn’t believe he was gay — Yaser was unable to identify the rainbow flag and had never been to a Pride parade (no word on whether or not he could name at least 3 cast members of Queer Eye and/or identify Portia De Rossi in a lineup).

However, at the end of this March, Kenney also announced that Citizenship and Immigration Canada would be partnering with the Rainbow Refugee Committee to provide $100,000 in support of gay refugees in Canada over the next three years. Opinions have been divided over the sponsorship, which is unquestionably important but which was also rather strategically announced during the campaign period for the upcoming election.

The thing is, despite the fact that many groups ﻿﻿have called for changes to the refugee process — Egale, a national gay advocacy group, AGIR, a Montreal group, and the Rainbow Committee in Vancouver —  individuals like Pepper getting the word out through grassroots public awareness campaigns are still one of the best chances the process has for change.

In the Ottawa Citizen, Pepper said:

“I have tons of privilege and one of the privileges I have right now is the luxury of time and resources. This is about going out and educating and getting the attention of people of goodwill — my generation and the younger generation — who actually care and know that we can help change the world and make it better.”

You can follow the North Star Triangle Project on Twitter or read updates from each stop on this blog.