In a move that is inspiring and also unfortunately infrequent, Citizenship and Immigration Canada has announced that it will partner with the Rainbow Refugee Committee to proactively work towards sponsoring persecuted gay immigrants to come to Canada and live in safety.

The department will provide $100,000 in assistance to cover three months of income support for the refugees upon their arrival here, while the Rainbow committee will offer orientation services, accommodation, food and other basic needs.

“These funds are a welcome first step in response to the crisis facing lesbian, gay, bisexual and transgender (LGBT) people around the globe, at a time when 77 countries continue to criminalize homosexuality and five prescribe the death penalty,” said Helen Kennedy, executive director of Egale Canada, the country’s largest LGBT human rights organization. 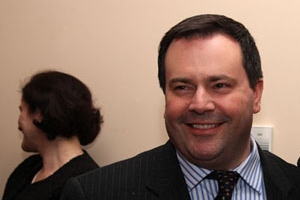 Although there have been a few widely-reported cases of Western governments like the US or UK agreeing to accept individual immigrants who had proof of horrific treatment in their home countries, but it’s rare for a country to make a plan and set aside funds with that purpose in mind. The Star notes that Immigration Minister Kenney’s decision in this area stands in contrast to his decision to noticeably omit gays from the country’s travel brochure earlier this year, and also that it’s one he makes on the eve of an election. How refreshing to see a public official working for the gays rather than disavowing them as elections loom! Four for you, Mr. Kenney. Four for you.

PS: Saskatoon police officers are also taking the initiative to be trained on homophobic violence and hate crimes. Canada wins this week!

Earlier this week we reported on a judge who adjourned the deportation of a lesbian couple in light of the legal limbo that DOMA currently stands in; now the Daily Beast reports that there are several districts whose legal departments have officially put processing deportations of gay binational couples on hold.

It would appear that David Bahati and the Ugandan Parliament are giving up on the Ugandan “kill the gays” bill. “After reviewing the so-called Kill The Gays bill, which sought to imprison for life practicing homosexuals (and execute repeat offenders), on the order of President Yoweri Museveni, the the Legal and Parliamentary Affairs Committee has opted not to put the bill up for debate by lawmakers, ending a two-year ordeal that attempted to further criminalize “aggravated homosexuality.”

The Colorado Senate has passed a civil unions bill! It will next be considered by the House of Representatives. Also, two Denver policemen were fired this week for beating a gay Latino man outside a downtown bar and then lying about it in their police report.

Let’s be real, you’re all huge dorks. That’s ok, so are we. So we can all rejoice about this Month of LGBT Comics! They look really cute you guys!

A lesbian won this time! She has a cute haircut and her name is Sarah. It’s like if American Idol happened again for the US but Adam Lambert actually won this time?

Marquette University of Milwaukee has announced it will begin offering domestic partnership benefits to its employees starting next year. “The move by the Catholic, Jesuit university comes about a year after the school rescinded a job offer to a lesbian and scholar at Seattle University. Marquette officials said at the time, rescinding the job offer to Jodi O’Brien had nothing to do with her sexual orientation. But, it triggered heated debate over the issue.”

Maybe you’ve already heard about this week’s brilliant internet smackdown story – the bizarro triangle of internet ‘comedian’ Peter Coffin, model and blogger Xiaxue, and Coffin’s alleged girlfriend, Kimi Kobayashi. When Coffin and his girlfriend both began harassing and leaving misogynistic hate messages around the internet for Xiaxue, she composed this exhaustive blog post detailing all the irreconcilable facts about Kobayashi’s identity – for starters, that although she’s allegedly Japanese, all the signposts and texts around her in pictures are always in Korean – leaving a very convincing argument that Coffin has put a ton of time and effort into creating and maintaining a fake internet girlfriend, stealing someone else’s identity in the process. Now, there’s no way to prove that this is the case and not, as Coffin says, an elaborate ruse by a secret third party to embarrass him, but it’s satisfying nonetheless.

Lindsay Lohan was seen at Tribecca West Editing Studios In Venice this week. Does that mean anything? No one knows.

Out lesbian model Amber Heard will be the new face of Guess.(PS we interviewed her in December, just saying.) “Marciano stated, “We are thrilled to have signed Amber Heard for the Guess Fall 2011 advertising campaign. Amber embodies the essence of the true Guess girl with her natural beauty and classic all-American good looks. The campaign, which was shot by Ellen Von Unwerth, is sure to become a classic that will continue to define what the Guess brand stands for.”