On Friday, March 25th, Stephen Harper’s minority government was found in contempt of Parliament. Saturday morning, Harper asked Governor-General David Johnston to dissolve Parliament, and an election has been called for May 2. This will be Canada’s 4th election in 7 years. This is also the first time in Canadian history that a government has ever been found in contempt of Parliament. Previously, there have only been 5 occasions of ‘non-confidence’ votes.

Opposition parties have been saying for months that they would not support the 2011 federal budget, released on Tuesday by Finance Minister Jim Flaherty. The budget itself was not typically “Conservative”, clearly trying to meet the NDP halfway and stave off an election. But Jack Layton (leader of the NDP) was having none of that. Flaherty knew that no matter what he put on the budget, the opposition would still vote against it, so it felt more like a symbolic gesture rather than anything concrete. 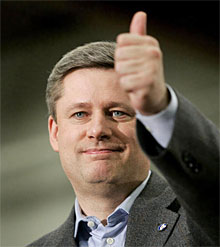 The Montreal Gazette has a decent rundown on how Harper’s government fell. A lot of it has to do with the fact that Harper initially did not release corporate-tax revenue projections or the costs of crime bills (forecast as $650m for 18 crime bills), which the finance committee reported as a breach of parliamentary privilege by MPs. Harper’s Conservative party’s official end came in the House of Commons on a Liberal non-confidence motion by a vote of 156 to 145.

The good news is we now have a chance to get rid of Stephen Harper; polls, however, have shown that public opinion favours the Conservatives, and they may even win a majority this time around – they only need 12 more seats to win it. A lot can change in a month, though, and Michael Igantieff and The Liberals have a long road ahead of them, starting with trying to get Canadians to care about this. 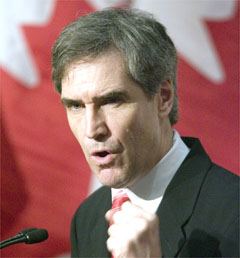 What is completely frustrating is that together, the Liberals and the NDP could win a majority government; instead, they divide the left. Liberal leader Michael Ignatieff has said he will not form a coalition government with the NDP or the Bloc Quebecois, no matter who wins.

UNFORTUNATELY, because of this election, all bills on the table in Parliament have died, including bill C-389, which would have added hate crimes protection based on gender identity and gender expression to the Canadian Human Rights Act and the Canadian Criminal Code.

So, the election race begins, and I truly think that this one is up in the air. In the meantime, what do you think is going to happen? Was it a bad move by opposition parties to force an election when the political climate is clearly not in their favor? If Harper wins is everyone going to threaten to move to Sweden?