This week here at Drawn to Comics, we’re taking a look at the first three issues of Marvel Comic’s new title Ms. Marvel. This book follows the adventures of Kamala Kahn, a sixteen year old Pakistani-American Muslim girl as she navigates life as a teenager who recently gained superpowers that her friends and family don’t know about. It’s written by G. Willow Wilson, a Muslim woman herself, and illustrated by Adrian Alphonsa, and it sure is taking off with a bang. 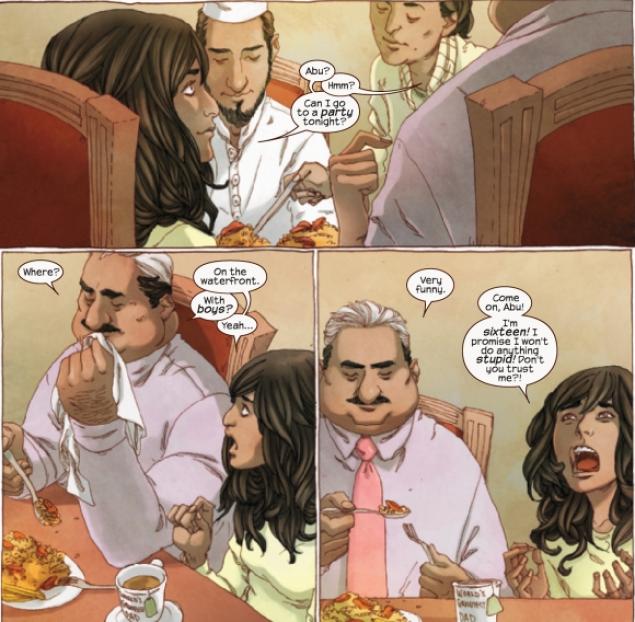 Kamala with her family. via tutorialbasket

In the first issue we get to know Kamala the girl. We’re introduced to her as she’s taking a giant whiff of some gas station BLTs. But as her friend says, she needs to “either eat the bacon or stick to her principles. Chow or Chow not, there is no sniff.” She’s there with her friends: Bruno, who works there; Nikia, who’s Turkish and somewhat more traditional than Kamala; and Zoe, a white girl and “concern troll” who only goes there to help out Bruno’s economic situation and asks Nikia if she’s going to be “honor killed” if she doesn’t wear her headscarf before saying “wow cultures are so interesting” when she says that her dad doesn’t even want her to wear it.

Marvel has really been killing it with their characterization of teens lately. First they had Young Avengers, and now this. Kamala knows she’s different. Her classmates make sure she never forgets, and so does her family. She celebrates different holidays, she’s excused from gym class and she’s not allowed to go to parties. Being a teen is hard enough; you already feel like it’s you against the world. When you add to that being anything other than a white Christian, it can feel like you’re not even human. This is where her superpowers first come come in. 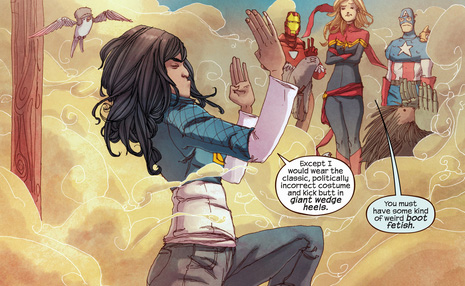 Kamala sneaks out to go to a party — she’s trying to fit in, to be more normal. However, once she gets there, she’s given a drink that she’s told has no alcohol in it; Zoe says that she thought she wasn’t allowed to hang out with “heathens” on the weekend. Kamala runs away from the party and straight into a mysterious fog. She passes out and hallucinates The Avengers as personifications of Faith, Urdu language wisdom included. She wishes she was “less complicated” and even wishes she was a beautiful fair skinned blonde (specifically Captain Marvel). When she wakes up, her wish has come true, she’s literally transformed into Captain Marvel, or at least into her previous super identity, Ms. Marvel.

I absolutely love what starts going through her mind, thinking about how this body and costume aren’t what she thought they would be. She thought looking and dressing like this would be liberating and empowering, and maybe for Carol Danvers (Captain Marvel) it is, but for her it’s just uncomfortable. The hair gets in her mouth, her knee-high boots pinch and she has a monster wedgie. She also starts thinking about the fact that she’s Captain Marvel. She’s turned into a superhero; maybe she should start acting like one. It’s then that she sees a classmate, Zoe, who isn’t even nice to her, fall into the water and start to drown. Kamala’s mind goes straight to an ayah from the Quran that her dad often quotes: “Whoever kills one person, it is as if he has killed all of mankind, and whoever saves one person, it is as if he has saved all of mankind.” With this in mind, she leaps into action.

Wilson is so great at inserting the perfect amount of humor into the story. As Kamala is trying to get a grip on her powers and deal with the fallout from sneaking out and her friends being rescued by “Captain Marvel,” the pacing and jokes really pick up. But not everything works out well for our young heroine. In issue three, she starts to embrace her ability to turn into Captain Marvel. She heads back to visit her friend and runs straight into a robbery-in-progress. Although it’s not quite the criminal action she thought it was, and although she uses her new powers to transform into Ms. Marvel and stop the “robbery,” someone still ends up getting shot.

The art also does a great job at adding humor and life to the story. It has such a youthful feel, and the slight cartoonish vibe is perfect for a comic about Kamala. Not only does she have literal shape shifting powers, but she’s also a teen girl. And if there’s one universal truth about teen bodies, it’s that they all feel like they’re shifting shapes. The exaggerated hands and legs make the teens look like actual teens. Plus, it’s super amazing seeing the wide variety of people of color this comic has. Kamala’s family all look like different people, they’re all distinct and unique, but they all definitely look like a family. 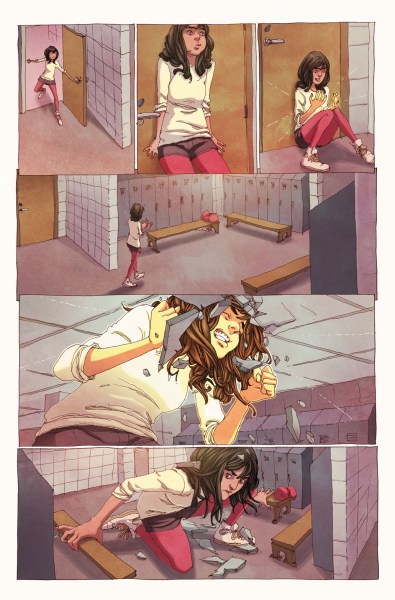 This is quite a cliffhanger to end on. I am absolutely loving this new series and I’m counting down the days until the next issue. So far, this comic doesn’t have any out queer characters, but seeing this kind of representation for girls is super important and fits right in with the ideals of as. I definitely think that this comic has exceeded all of the hype it built up. It’s vitally important that this book sells well if we want to see more comics headlined by women of color, so I’d suggest heading down to your local comic book shop and picking up all three of the issues that are already out. You can also get a digital copy online from comixology or a physical copy from Amazon.