There’s a photograph of me at age seven, barefoot and muddy-calved. My hair, which came out of the womb thick and black as a pelt, is between haircuts, tangling at my shoulders. I am standing on the edge of a lake, my pre-orthodontics teeth revealed in all their messy glory as I grin at the camera, shoving a palmful of pebbles at the lens. Somewhere a few feet from where the picture is taken is a tent my family is sharing, and the pit we’ve made from bigger rocks that houses last night’s fire. I am always trying to build fires. This is a desire I take into adulthood, carried into metaphor and infused in everything I do.

I would show the photo to you now but it’s still in my mother’s house, sitting on the living room table that doubles as a set of drawers for linens; I was one of those fortunate children who grew up in a house where furniture was repurposed and redefined so many times that figuring out my gender identity seemed less tasking than understanding how to make a house out of unmet ends.

Most of my childhood memories are associated with being outdoors. As a kid, the soles of my feet were rock hard from all the afternoons I ran barefoot from the back door to the ridge behind our house, where you could see all the way across the mountains to Vermont. I’d sit on my favorite rock in between a ring of three trees and use my new knife to whittle swords out of branches. Once, I cut off a chunk of my own hair with the knife, and tried to tie it around my sword. I thought it would be a token of luck, or honor, or something else I’d picked up from the fantasy novels I was devouring. I’d race from one end of the woods to the other, chasing after monsters. Sometimes I feel like the monsters followed me to my twenties, and when I’m walking home at night, or waiting for the trolley in the dark, I wonder if a wooden sword would be able to frighten them off like the old times. 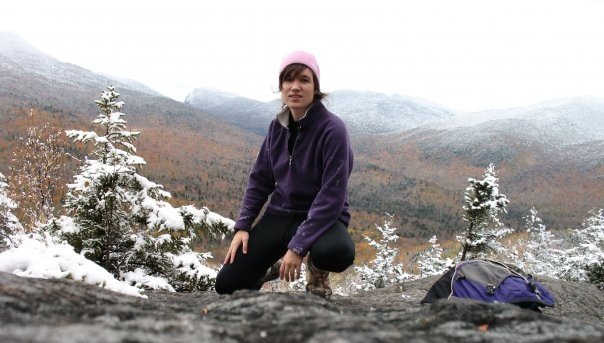 We camped all the time when I was younger. Vacations are expensive, but camping is cheap, and we already lived in a place that other, richer people would drive hours to so they could set up their RVs. We hiked during the day and then made dinner around the campfire at night. Eating baked beans out of a can was my favorite meal for years. I once told a girl that the best food in the world is the peanut butter sandwich you eat after a day of climbing mountains, and when she shook her head and laughed at me, I knew the relationship was doomed.

I loved camping for many reasons. It was a time when I could be in the wilderness indefinitely, which seemed to be the only place I ever felt completely safe or calm as a child. It was also a time when my family literally lived on top of each other, and I took a lot of comfort from this. We felt like a single unit when we camped, an unbreakable bond of humans who could depend on each other, trust each other, count on each other’s indefinite love. This was everything I had ever wanted. This feeling did not outlast the end of the camping years, though, and like so many things in life, even family becomes a distant thing or a broken thing, a thing that can be worn down by harsh weather and someone forgetting to oil the latches.

I decided when I went to A-Camp this year that I wouldn’t be telling my family about my trip. There are things I’ve written for this website that I don’t want them to know, things I have worked incredibly hard to keep from them, and I knew there wouldn’t be enough explanations to hide that part of this trip. So I am flying to Los Angeles without their knowledge, leaving for a week without their knowledge. For some people, this is a small thing or a typical thing, an adult thing that has come with their adulthood. For me, this is a strange moment where I have stopped pretending I can recreate whatever it is I miss so badly in my childhood and agree for six days that I am my own person, a wild child who is now a wild adult, and deservedly so. It feels similar to the first time I lost a tooth, or cut off my hair. It feels like something I am meant to photograph and keep on my living room table.

Queer community to me has always been synonymous with queer family. When I found my queer friends, they quickly became my backbone, my shoulders, people I’ve spent so much time with that I’ve started to see myself in them. We might as well have the same freckles for all the times we’ve sat under the same sun, but we do share certain ways to respond to questions, the same worn curves in smiles, gestures that seem passed on between generations rather than friends. And maybe in some way we are family, after all. Queer community is generational in so many ways–- we could not always make children, and our legacies could not always be communicated in heteronormative terms, so there were other ways to pass on whole chunks of ourselves and our communities. I still feel that sense of queer inheritance in my own social circles, from the older queers who look out for me to the baby butches I’ve adopted like younger siblings.

My grandmother used to have a copy of the lakeside picture in her house, and I imagine her looking at it before she passed, since it followed her to the nursing home, and to the bed she died in. She called me the “wild child” for my mess of hair, but she always grinned when she said it because I was the grandchild who had inherited her looks, her son’s olive skin and cheekbones. I was the grandchild who grew wiry from running through the woods, growled like an animal before submitting to her father’s clumsy braiding, skittered around on all fours until my hair tangled itself into knots. My grandmother loved this child. She believed in this child. Someday this child would grow into a woman, and cut off her hair as an act of cleansing, as if she were Samson and the Bible had been wrong, as if she’d held her weakness in her locks, as if they’d been holding back all along. She would take women for lovers and fight pain with pain, and when she ran, her hair would be stuck midnight to her forehead, dark as the day she was born.

I want to be that girl in the picture again, crooked teeth like a badge of honor, handful of pebbles more precious than my higher education. I’m always looking for that feeling of camaraderie that I felt in that tent, kneeling next to the fire. I know I’m finding it at A-Camp, surrounded by my beautiful fellow queers. Camp is family, after all.