I didn’t look up because I didn’t think I was being addressed. I continued to look at the whiskey list before me, as I have been on a whiskey kick for the past few months. I had lost myself to the same progression of thoughts I experience whenever I buy a drink: I’m broke and shouldn’t be spending my money on alcohol; alcoholism runs so deep in the family that it looks like a crack in the earth; I am participating in this legacy by consuming alcohol and this would probably upset my mother if she knew.

Something about the second “sir” was different. There was a question in his tone that time; he was not sure which one of us was wrong. He was questioning himself as much as he was questioning the person that I had figured out to be me.

I looked up and made my order. My voice is always the giveaway, complete with the remnants of a lisp I tried to shrug off in childhood. The bartender, a man in his late thirties with an enviable moustache, was blushing. He rubbed the back of his neck and stared at me. I was blushing, too, because my instinct is to automatically assume that I am in the wrong, or that, at the very least, I am not entitled to be upset. I’ve figured out after meeting people from similar backgrounds that this is a trait bred into those of us who were raised working class, especially those of us who were raised as girls.

The bartender couldn’t make eye contact with me anymore. He sputtered like he was supposed to be doing long division at the chalkboard. “I’m so sorry. Shit, I’m really sorry. Ma’am.” He tried to laugh about it. “You really had me fooled,” he said, and I tried to shrug and smile. We tried, but the trying wasn’t working. 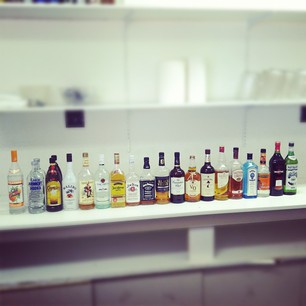 The other patrons at the bar looked over at me. The exchange had caught their attention, and now came the time for them to react, to give their input, to reveal themselves as embarrassed and thus disinterested, or overly interested, as these are the only two reactions to such a moment. Two of the patrons were women, one of them around my age, and they gave me sympathetic looks. “I can’t believe he did that,” said the one closest to me, and she frowned at the bartender when he turned his back. “You shouldn’t leave a tip.”

This left me in the gloriously awkward situation of the misgendered, which is doubly awkward because in some sense it’s not really misgendering to me. I’ll be honest: I’m flattered when someone reads me as male. If I wear my heart on my sleeve – and I do these days, much to the shock and dismay of a butch gone prematurely tender – then the sleeve itself is my masculinity. We are trained to detect certain markers around us to determine things about our surroundings. We read certain cues as male, as female, as safety, as a threat. I’m sure my markers are all askew, because I read just about everything as a threat, and I know from the reactions I encounter that nobody is quite sure what they’re reading on me. If my body’s a novel, then half the people I run into got their hands on an untranslated copy.

What were the cues that caused the bartender to assume I was a “sir”? We can only assume, but I’ve got a few guesses. That night at the bar I wasn’t binding, but that fact barely mattered under three layers. I had a t-shirt on under my sweatshirt, which was in turn under my denim jacket. My short hair, long overdue for a haircut now that the shaved sides have started to grow in as downy fuzz, was under a snapback. My black jeans were made for girls, because my hips were not made for a boy. And I had on my scuffed leather work boots, which the bartender could not see, but which always make me feel just a little bit more butchy. I’m noticeably past the place of androgyny where it could be a trendy hipster thing, and sit stably in the realm of genderfuckery. I am butch. I am genderqueer. I’m a masculine of center dyke, yeehaw. 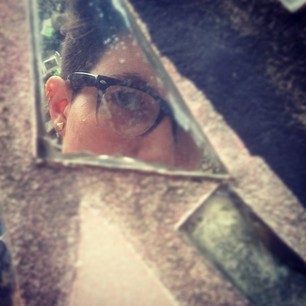 There are other cues I might exhibit, too. When I sit, I’ve noticed that I sit with my legs spread apart. If I cross my legs, I put my foot on my other knee. I often hunch over with my knees spread, my elbows or forearms resting on my thighs. I have adopted, maybe consciously and maybe not, modes of sitting and resting that would be considered masculine. I carry myself in a way that might be construed as masculine. I’ve learned to do this as a thing that makes me feel more comfortable, more in control, and as a defense mechanism. I think it’s a thing many of us use as a defense mechanism, this confident carriage, this way of moving and holding our ribcages and shoulders in place that says “back off” and “don’t come over” and “you won’t notice me, I’m just another guy you don’t want to touch.” It’s a thing I learned to do the first time I walked through a city. It’s a part of the reason I find myself dressing in an extra masculine way when I know I’ll be walking home late at night, or moving through a less friendly part of the city. The thing is that I like dressing in a very masculine way the rest of the time, too, and that once you are no longer passing, when your cues are confusing and they can’t tell what you are, you can invite just as much danger. There is a fine line between avoiding attention and attracting it when you have a queer body.

I am a recent implant to the urban world. I just moved to West Philadelphia, and it’s my first experience living full time in a city. I have had stints of urban dwelling, usually provided by sweethearts in cities who wanted my company for a month or two. They’ve been wonderful excursions from rural life (or death, depending on how you think about it), but excursions were all they could ever be. As a kid, much like any other kid from a small conservative town who didn’t like what they saw, my plan was to move to The City as soon as I could. I had big plans for artistic endeavors, bohemian dwellings where I’d be with People Like Me, projections of life that looked like movie sets more than they looked like any city I’d ever seen. I was planning my Queer Exodus before I even knew what the hell it was. And now, yes, I am one of the guilty parties who has fled her native mountains and dirt roads for the metropolitan. I prepared my feathers for weather and flew six hours south to a house tucked on a sidestreet under Baltimore Avenue, complete with cat and backyard. I see at least a handful of queer people every time I leave the house; I had not seen another queer person in months when I lived at home. 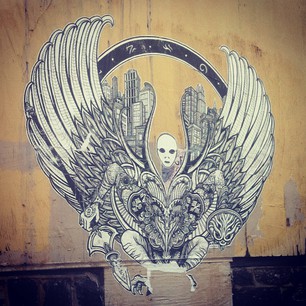 I’m getting used to this change, slowly but surely. The contrast between the road I grew up on and the street I currently inhabit is frighteningly vast, but there are also familiar things here, like noisy kids playing in front of the houses, and neighbors who take an interest in each other’s well-being, and locally-owned businesses where people know each other’s first names. Being a country kid means that the city has always been characterized as both a magical fantasy and a deadly nightmare, and my personal background means I see danger around every corner, even when it’s broad daylight and I’m walking to pick up milk at the deli. No matter how many people I see who look like me, whose presence should reassure me that being a masculine dyke and an androgynous queer and a person who is “not normal” is okay here, I still hold my breath when a man passes. I wait for a comment, a look, anything to tell me that my masculinity is an affront to his. And I do get those comments sometimes, the doubletake, the questioning. The group of Penn students, probably in a fraternity from their behavior, who figured out I was not an adolescent boy, saying things to me as I walked home. The man who stares at me the entire train ride, makes me get off a stop early just to shake my anxiety. But these are not every person I meet, and they are not the only way I experience the world. Sometimes I am pleasantly surprised.

I was walking home from the South Street Diner at 4 in the morning, my belly full of pancakes and whiskey sours. Two men were standing on the corner in front of a closed market. They waited until I’d passed them, and after saying something to each other, addressed me.

“How are you tonight?” they asked, and I turned around, still a little drunk.

“Will you tell my friend here that you’re a female?”

“I’m sort of a girl.” I said, and at this point I could feel my body tensing a little, because I know these conversations too well and at four in the morning with no one else in sight, two men much larger than me asking these kinds of questions, well.

“What does that mean?”

“Yeah, that’s what I thought! But see?” The man laughed and nodded and gave his friend an “I told you so” elbow in the ribs.

“Whatever, all you white people look the same.” his friend said, laughing.

“You have a good night!” They yelled after me, and I waved, stumbled home. I grinned the whole way.

So back at the bar, I drank my whiskey. The friend I had been waiting for came along, and I forgot to mention the incident. When I paid for our drinks, the bartender told me the first whiskey was on him and refused to let me pay. He apologized again, and I told him not to worry about it, that he was half right anyway. And hey, I got a free whiskey out of the deal. Butch: 1, World: 0.