Here I stand (sit?), a two-time Dinah veteran. Not yet a seasoned pro, but getting there. I’ve experienced Dinah as extremely single and extremely taken, as a nobody with a pool party pass and a shitty hotel room and a nobody with a guest bracelet and a nice hotel room. I’ve laughed. I’ve cried. I’ve walked more than I wanted and slept less than I needed. I approached this Dinah with an understanding of what I was about to encounter and a preparedness that allowed me to not only survive but to mostly enjoy myself. 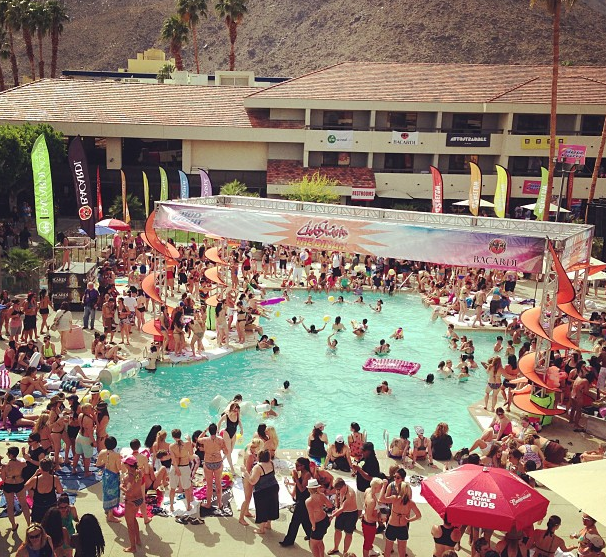 My girlfriend and I drove from LA to Palm Springs Thursday night. I figured it would be healthier for our relationship since there was a thing on Friday we could possibly be late for, and she is perpetually that. One of the perks of being white, I guess: you get to be late and you don’t feel like people will judge your entire race for it. Girlfriend Liz tells me this is called “stereotype threat.”

We arrive at the hotel and they have the wrong name listed for check-in. I don’t really know whose fault this is so I blame the entire human race as I am wont to do. I have to call Alex Vega in the 11 o’clock hour so she can call the hotel and switch the reservation to my name. She handles it like a pro and in no time I’m filling out a form that not only replaces me as the person assigned the room, but lets me list the names of people I authorize to get room keys whenever they need them. All of this is a huge waste of time as apparently they burned this piece of paper as soon as I left, because no one was able to ever get a key without some sort of drama at the front desk. 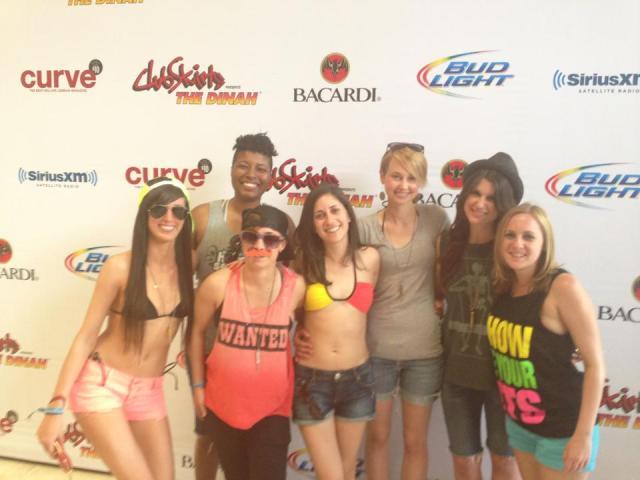 The next morning is as leisurely and relaxed as it can be when you have to wait while someone changes their bikini top/shorts/tank top combination five times. We head to get our wristbands before the noon rush and then go back to our room to hang out until our friends and Autostraddle web series members get in. Along with Lauren Neal and Sarah Sokolski from Words With Girls, Sarah Croce, Haviland Stillwell and Ashley Reed are there with Unicorn Plan-It. There’s an Autostraddle meet-up that afternoon; we have all decided beforehand that it will be pointless, but we decide to be responsible individuals anyway. I don’t know about you, but when I’m hyped from just arriving to an event, have been drinking my face off and am dancing violently next to a pool, the number-one thing I want to do is go to a dark bar whose location I’m unsure of and talk to people who are probably way more sober than I am. Needless to say, the meet-up is a rousing success. More than one person shows up. It is great. I also just want to throw in that the only place it was mentioned was in the booklet, which only some people that attend Dinah get and which roughly three people on earth read. One of those people is me. I have literally never seen anyone else even touch that booklet. I don’t know how people know where to be. I guess there’s some gay guiding force that pulls them. 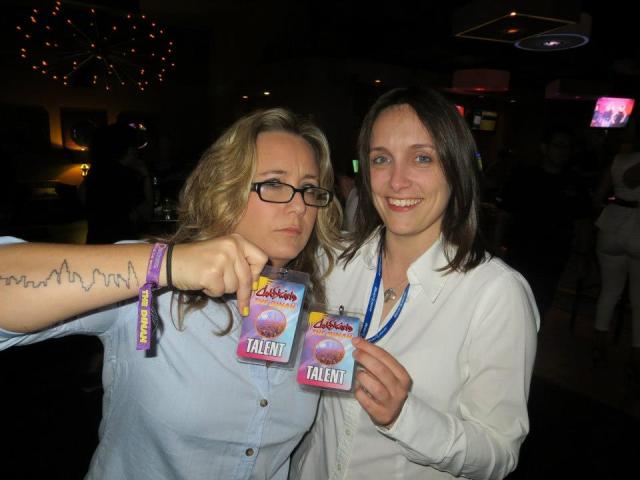 After the pool party, which I don’t attend much of between the going to the meet-up and and taking note of where everyone’s rooms are, my girlfriend and I decide to find food. We haven’t eaten since we had something quick in the morning, and we’re both starving. We wander around the strips of restaurants a couple of blocks from our hotel in search of a place that has vegan options, isn’t expensive and takes cards. After 30 minutes, we both know that if we don’t find food soon, we’ll to turn into cranky grumbling monsters. Just in time, we find a place called Atomic Dogs. I don’t like hot dogs so while she lucked out, I’m still screwed. I say fuck it and map the closest Burger King, which is two Dinah miles away. A Dinah mile, as defined by me, is five minutes of walking while intoxicated. We decide to meet back at the hotel and I start walking. 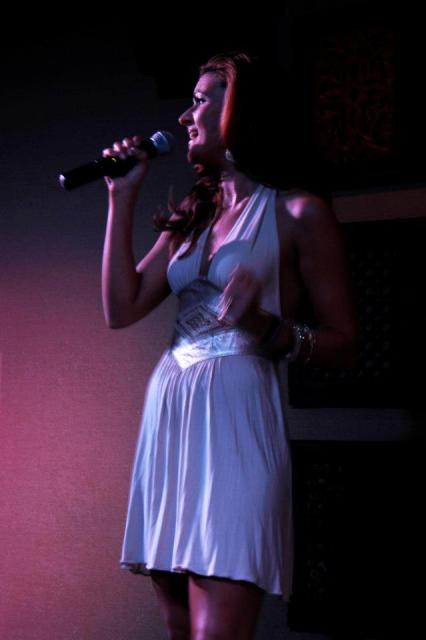 After we eat, we nap until it’s time to get ready for the White Party and Haviland’s performance; we really know how to get the party going. Haviland performed a five-song set, including two of her original songs, at Hunter’s, a local gay bar. We watched the show and chatted with Wendy Jo Carlton (Hannah Free, Jamie and Jessie Are Not Together) and Lisa Cordileone (Easy Abby).

Unlike the pool parties, which were at the Hilton, the White Party is in Hotel Zoso, where we are staying. There are three different rooms going, so everywhere you turn, there are hordes of women, dressed in their best (and probably only) white attire with drinks in hand and smirks on faces. Before we join them, the members of Words With Girls and Unicorn Plan-It have to hit up the VIP Party. I go down early to check it out and report back. There are a few of the other web series folks milling around outside the room but none of them are going in—or talking to each other. I decide we can forgo this awkwardness for a little while. 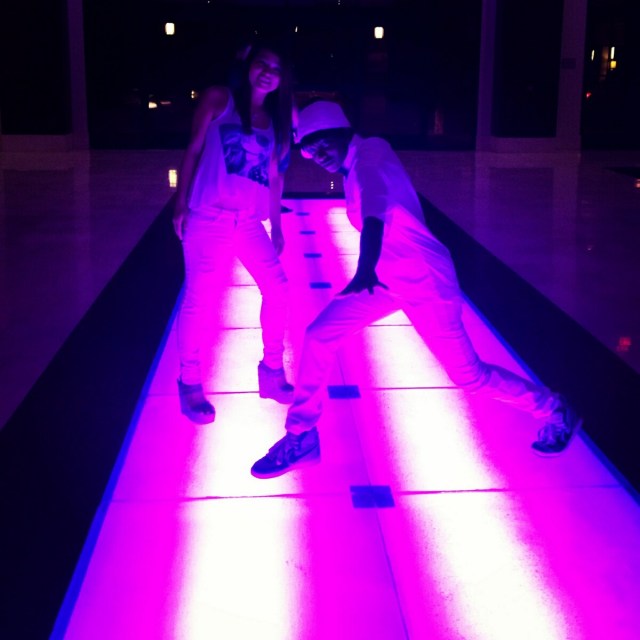 By the time we show up, all of the people I recognized earlier are gone and the only people in the room are the people that paid to be. We’re all standing around talking when we realize the DJ is playing a ton of old Jay-Z and Missy Elliot, along with other straight-up 90s jams like “Candy Rain.” No strangers to spectacle, we dance by ourselves on the empty dance floor until it’s time for the red carpet, where we proceed to look like we don’t belong and probably confuse everyone with our presence.

After the red carpet, we go back to the VIP Room because the DJ is still playing a heavy hip hop and R&B throwback set. A party promoter from the Virgin Islands buys us all drinks, and a Club Skirts photographer snaps pictures of us being ridiculous. There’s no reason to leave so we don’t. They’ve stopped checking wristbands at the door, so we invite all of our friends to the room and only leave when we find out that there’s a hip hop room upstairs. Eventually we’ve danced long enough and most people are too drunk to coherently answer texts about where they are that we decide to move on to the next thing, which is obviously pizza. We find a place that is a)open, b)walkable and c)dirt cheap. We rendezvous with Jess Shaffer of The Love Corner and I call cabs for the eight people that successfully make it to her room. We end up at a house party until 3:30-ish, then head back to get some sleep. 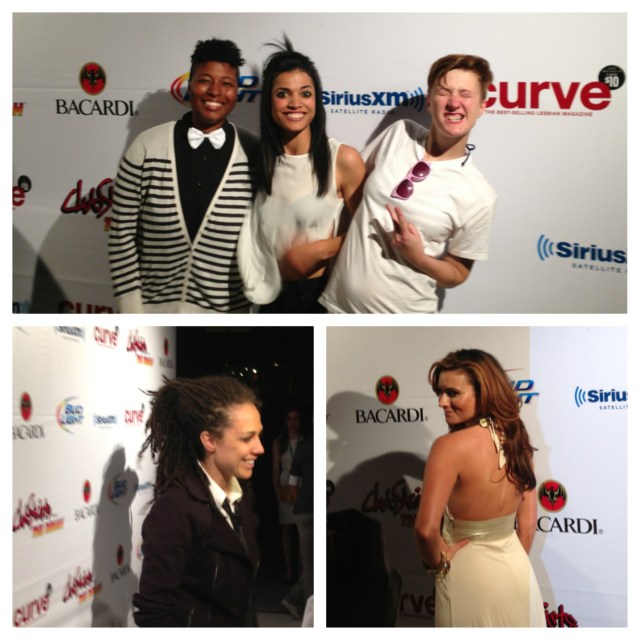 Next: Saturday and Sunday Shenanigans