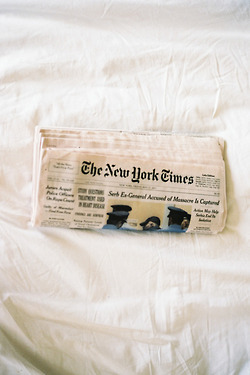 HELLO and welcome to the 35th installment of Things I Read That I Love, wherein I share with you some of the longer-form journalism/essays I’ve read recently so that you can read them too and we can all know more about Naked Joe! This “column” is less feminist/queer focused than the rest of the site because when something is feminist/queer focused, I put it on the rest of the site. Here is where the other things are.

The Devil on Paradise Road (September 2012), by Bruce Barcott for Outside Magazine – “It started as a bluebird New Year’s Day in Mount Rainier National Park. But when a gunman murdered a ranger and then fled back into the park’s frozen backcountry, every climber, skier, and camper became a suspect—and a potential victim.”

The History of Nick Offerman and Megan Mullally’s Marriage (March 2013), by Jesse David Fox for New York Magazine – Because they are the cutest. This is one to read on your computer because there are lots of videos and formatting situations.

Cruel and Unusual Punishment (March 2013), by Matt Taibbi for Rolling Stone – Yet another piece about a supremely fucked-up, ableist, classist and racist element of our criminal justice system and the prison-industrial complex! “Despite the passage in late 2012 of a new state ballot initiative that prevents California from ever again giving out life sentences to anyone whose “third strike” is not a serious crime, thousands of people – the overwhelming majority of them poor and nonwhite – remain imprisoned for a variety of offenses so absurd that any list of the unluckiest offenders reads like a macabre joke, a surrealistic comedy routine… Have you heard the one about the guy who got life for stealing a slice of pizza? Or the guy who went away forever for lifting a pair of baby shoes? Or the one who got 50 to life for helping himself to five children’s videotapes from Kmart? How about the guy who got life for possessing 0.14 grams of meth?”

Cover Girls, by Rebeca Bengal for Print Magazine (April 2008) – On the politics behind “updating” young adult novel covers to (relevant to this week’s listling!) appeal to new readers, year after year after year for as long as books and we all shall live. Like Sweet Valley, Nancy Drew, Judy Blume books and even Weetzie-Bat.

Love Hurts (March 2005), By Elizabeth Méndez Berry for VIBE –  “When Liza Rios’s story [of domestic violence] emerged, she got little support or coverage. One person told VIBE that a major rap publication pulled a story about her for fear of offending Pun’s camp. It wasn’t just the media that turned a blind eye. Plenty of people repeated rumors that she had been unfaithful and, therefore, deserved to be beaten.”

Kaboom (March 2013) by Robert Kolker for New York Magazine – My #1 feeling about this article was “ooo, we should have Rosa illustrate stories for us that are about real people but that we don’t have pictures of!” My #2 feeling was that this was the kind of story I just can’t help but read and I have no idea why. Also, when the story about Morgan Gliedman and  her boyfriend Aaron Greene broke, Aaron Greene was described as “a Harvard grad,” but in this piece it says he dropped out of high school. See, Morgan went to Dalton and NYU, which is mentioned in every news report about the couple as well. But also, what’s fascinating about this story is that it’s totally not special or unique, yet it got a lot of space in NY Mag this month. Because, see: this happens every single day. To people who didn’t go to Dalton.

Ms. Fights For Its Life  (November/December 1990), by Peggy Orenstein for Mother Jones – I read this on my iPad where it didn’t say that it was written by Peggy Orenstein, WHO I LOVE, because she wrote Schoolgirls, which changed my life because it explained everything. Anyhow obviously the “feminist magazine in trouble” story is one I’m always quite drawn to and this was another thing it was interesting to read from the vantage point of 23 years later.

Naked Joe (April 2013), by Bill Donahue for Boston Magazine – “One hundred years ago, Joe Knowles stripped down to his jockstrap, said goodbye to civilization, and marched off into the woods to prove his survival skills. He was the reality star of his day. For eight weeks, rapt readers followed his adventures in the Boston Post, for whom he was filing stories on birch bark. When he finally staggered out of the wild, looking like a holdover from the Stone Age, he returned home to a hero’s welcome. That’s when things got interesting.”

The Weeklies (March 2013), by Monica Potts for The American Prospect – About Denver families who have been forced to move into the Ramada after they lost their homes, and the community they’ve established at the Ramada and their rocky relationship with the hotel’s management, and what it’s like to live in a hotel room with kids for a really really long time.

Disappearances Have to Disappear (March 2013), by Alice Driver for Vela Magazine – “In my trips to Ciudad Juárez, first in 2010 and later in 2013, I wanted to pull the flesh from the bone, to strip away the images or move beyond them and strike at something hard and real. I wanted to find the stories behind the images, to meet the photographers who, for decades, had lived and worked in the city whose images they captured.”