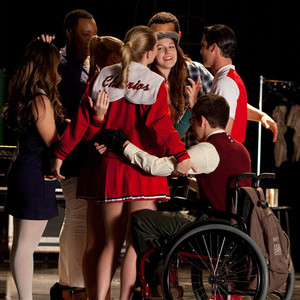 I want to admit that I cried during this episode. I cried because I am easily wrapped up in carefully constructed emotional moments and this one took the cake. The Glee kids sat in the dark in the choir room crying and I burst with terror for them. Actually, I felt terrified for all the real kids who’ve actually sat in the dark amongst gun shots and footsteps across their schools. I felt sad and terrified and confused for the kids who never had the time to sit the dark in a choir room because someone just opened fire on their classrooms. I cried about the kids who encounter gun violence every day on their walk home from school and about the kids in neighborhoods the government neglects who hear gunshots while lying in bed at night, or doing their homework, the kids who have already lost friends and family to gun violence before they graduate high school. And yeah, I cried about the fake characters on Glee played by 20-year-old actors because for whatever reason I love Glee and I hate to think about harm coming to even fake characters. I’m sort of all squishy on the inside.

I thought that Glee had actually gotten it right.

At least until Sue announced it was her gun.

The second she did, and even as she confessed to Figgins, I just knew this was going to be about Becky. The whole thing was just a big, startling misunderstanding, and with that, all potential emotional impact evaporated.

Everyone is so busy praising Glee for the appropriateness and emotion with which they handled school violence that few seem to see that Glee didn’t address the issue of school violence at all. They held us captive to their characters emotions regarding the potential of violence, but in the end the students were never actually in danger. It just feels emotionally manipulative. In fact, all Glee really accomplished was an entirely problematic treatment of both school violence and the lives of adolescents with developmental disabilities.

I’m sorry, Glee, but you do not get to bask in your own glory just because you wrote an episode about a serious issue and showed shaky-cam crying kids. You do not escape criticism simply because you attempted to tell a story about something which is scary and fills us all with queazy dread. I refuse to jump on the bandwagon of praise.

Here’s the issue: this country doesn’t have a problem with intellectually disabled students accidentally firing off guns in school. This country has a problem with students bringing guns to school with the specific intent to harm other students. To conflate the two scenarios is inexcusably offensive.

Let me repeat that more clearly. I am appalled that the Glee staff thought the most plausible storyline for gunshots in a school would be one in which Becky brought a gun to school and accidentally shot it, at which point Sue Sylvester stood idly by as the school was put on lockdown, the SWAT team was called in, everybody’s lockers were searched, body scanners were purchased and everybody feared for their lives. The writers thought this was more plausible than an angry student with access to guns who comes to school with violent intent. More plausible than a 15-year-old student getting killed while hanging out with friends in a park. More plausible than some jerk parent over-zealously expressing their right to bear arms. I don’t have family members or closer friends with developmental disabilities, I point that out as to not claim their stories as my own, but I’m mortified that someone thought this plot twist was a good idea.

But riddle me this: why should Becky have to be the character to take on that burden? Would it have been too hard to invent a character the Glee kids didn’t know? Perhaps one with a motive that accurately reflects that of a student who incites school violence? Instead, Becky is the character “to blame” and Sue is the big hero who protected and saved the poor little girl with Down Syndrome. I worry that this sends a very specific and incorrect message about the decision-making capabilities of someone with Down Syndrome. I worry that this encourages kids to fear disabled kids in a way in which they need not.

The sad thing is that Glee missed a really great opportunity to tell Becky’s story. It’s not just ableist, it’s lazy writing. Adolescents with intellectual disabilities face very real and often upsetting changes when they age out of public programs like high school. As explained by the National Down Syndrome Society, “upon graduation, the student will no longer be eligible for many of the services, and the responsibility of identifying, locating and coordinating appropriate resources will fall mainly upon the individuals and their families.” Many of their stories are as compelling as teen pregnancy, domestic abuse, eating disorders and, yes, even high school lesbians. Indeed we have many more television arcs about LGBT teens than we do about what it feels like to be an 18-year-old girl with Down Syndrome. We are kidding ourselves if we think the stories of adolescents with intellectual disabilities have been properly told by Becky’s previous narrative. And how did this particular story end? Becky was punished — she lost her best friend, Sue Sylvester. She lost her ally. She lost her cheerleader.

Glee wanted to do too many things in one episode. They wanted to do a PSA on school violence. They wanted to write Sue off the show. They wanted to address what Becky might be feeling towards her impending graduation. Really though, I think the Glee writing team just wanted a way to get the audience invested in the new Glee kids. Perhaps they succeeded for some, but for me this whole debacle just highlight’s Glee‘s tendency to steamroll captivating characters in favor of hollow one-episode flirtations with the Issue-of-the-Moment.